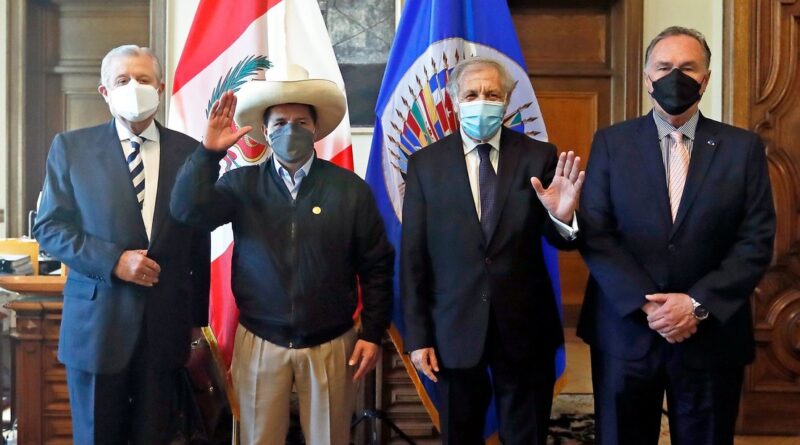 The White House usually has two attitudes towards elected governments in Latin American countries. When it comes to “friendly governments,” that is, the ones genuflecting to the Empire’s mandate, it extends its hand, offers them support, and guarantees them permanent assistance.

When, on the contrary, oppositional administrations arise, it rejects and disqualifies them, as is happening right now with Cuba, Venezuela, Nicaragua, or Bolivia. In the Peruvian case, a special phenomenon occurred.

It may be remembered here that in November last year, in the elections held in the United States, Joe Biden defeated Mr. Donald Trump. From this, an unprecedented incident arose—the acting president alleged fraud and ignored the verdict of the polls. In the extreme, in the first days of January of this year, Trump organized a coup d’état when his supporters stormed the Capitol. Its failure only confirmed the victory of the current US president.

In Peru this year, when Keiko Fujimori lost the elections to Pedro Castillo, she denounced the election as fraud and challenged the decisions of the electoral body; but Washington did not play the game. It even instructed the Organization of American States (OAS) to act in accordance with the will of the Peruvian people, which is why a Keiko delegation had the door slammed in its face by US officials.

The United States then decided to “recognize” Castillo’s victory, pocketing the defeat; but an unconventional strategy was drawn up to wrap up the Peruvian government until it crushed under the weight of the Empire. The empire then acted in accordance with that purpose.

In order to advance in this explosive situation, the first thing it had to do was to deactivate Peruvian Foreign Minister Héctor Béjar. This was the first task, and then had a “friend,” Maurtua take his place.

In parallel, the US managed to advance in two ways: the Peruvian Congress passed a Legislative Resolution—with only 6 votes against it—authorizing the entry of United States military personnel on Peruvian soil, and carrying out joint naval drills in Huacho, with the participation of the US Navy.

As if this was not enough, Peru also started an expansion of the “cooperation agreement” with USAID, linked to the United States secret services. All this happened while Guido Bellido was still the Premier.

Then a second stage would come, with the presence of Pedro Castillo at the OAS. There, Castillo had to pay back Almagro for the favor of ensuring his election. Almagro asked Castillo for “help” to face the charges against his administration that came from Bolivia, due to the sad performance of the OAS that led to the fascist coup of November 2020 in Bolivia. That explains the sentence—“Long live the OAS” that Castillo uttered almost stammering.

The third moment came after the Nicaraguan elections. In the General Council of the OAS, Almagro obtained a “condemnation” of the elections in Sandino’s homeland. Bolivia voted against that resolution, Argentina and Mexico abstained, but surprisingly Peru voted in favor.

The day after the Nicaraguan elections, Almagro distributed some kind of “instruction booklet” addressed to the “friendly governments” of the region, indicating how they should pronounce themselves on the matter. Well, that booklet was turned into a “Declaration of the Peruvian Foreign Ministry” almost immediately.

RELATED CONTENT: Puebla Group Calls for Unity in the Face of Far-Right Maneuvers in Latin America

Who did Maurtua consult for that purpose? Nobody knows. But neither the Peruvian embassy in Managua, nor the Peruvians who saw these elections live could have contributed to this serious element in the matter. The elections in Nicaragua were, in effect, crystal clear, transparent, democratic, and participatory. An example for elections in Latin America.

And now a fourth moment has been revealed: the White House has scheduled a “Summit for Democracy,” which will take place in Washington on December 9 and 10. The meeting will feature selected guests. President López Obrador of Mexico has not been considered; nor Fernández, from Argentina; nor Arce, from Bolivia; but Piñera, Duque, La Calle, Lasso… and Castillo. Will the Peruvian teacher turned president attend the meeting? What is he going to do in the middle of this pack of hounds?

Since the US policy does not stitch without a knot, the OAS General Council unanimously accepted the proposal of Peru´s ambassador to the OAS, Harold Forsyth, that the OAS Summit scheduled for 2022 be held in Peru.

Has this happened before? Yes, of course, twice. In 1997, in the splendor of Fujimorato, for the first time the OAS General Assembly took place in this “capital of the viceroys, ”as Lima is also well known; and the other time in 2010, under the administration of Alan García. Could this be the third occasion—when Pedro Castillo would add his name to that of his illustrious predecessors as the host of the 34 heads of state and government of America, led by Joe Biden? What an honor!

For now, the Washington Summit appears to be the main danger for President Castillo.

We remembered when he assumed the commitment to lead an Independent, Autonomous, Sovereign, and Solidary Foreign Policy. How is he going to do it?