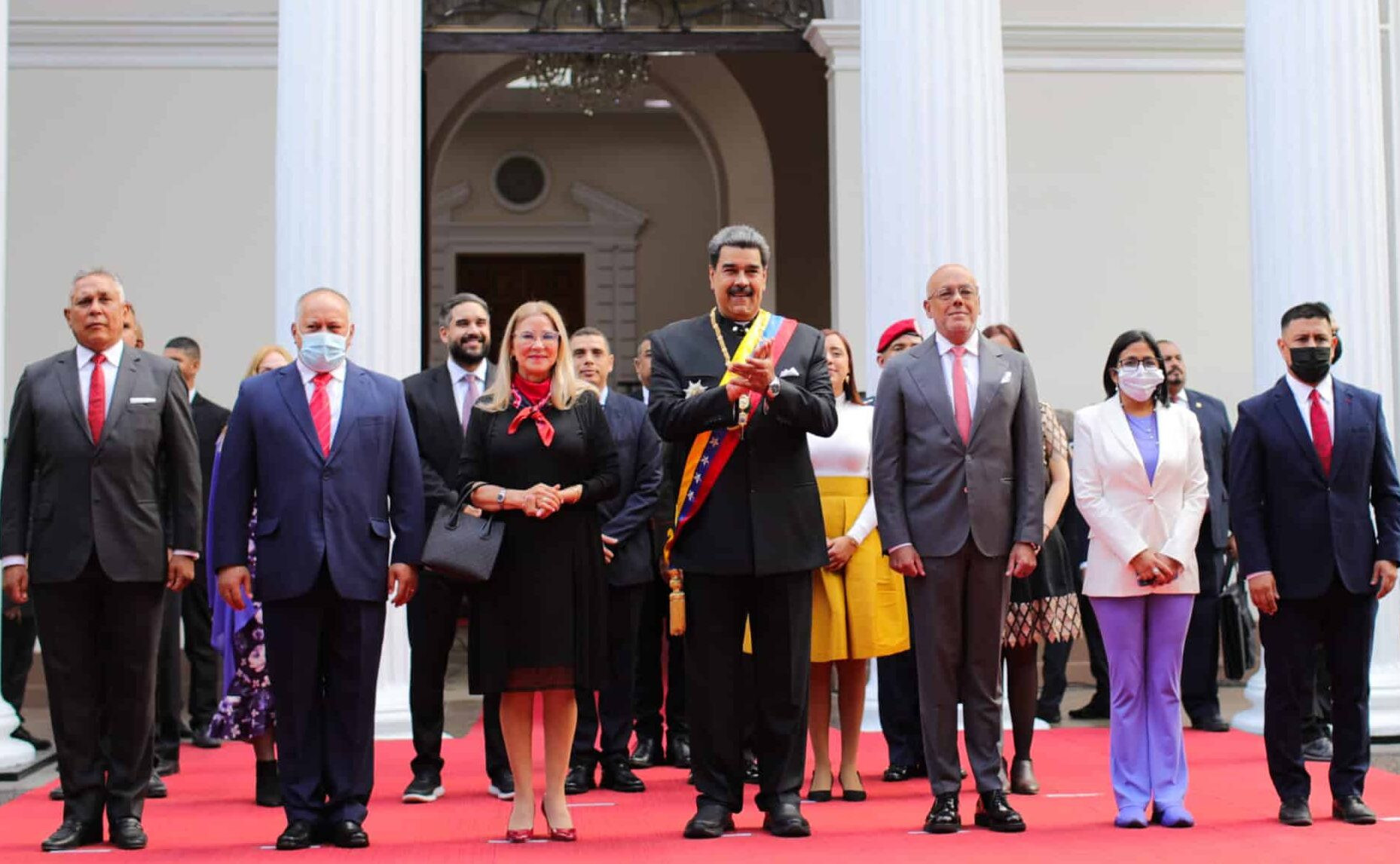 Venezuelan President Nicolás Maduro next to his wife, Deputy Cilia Flores, alongside top-ranked government officials and deputies before his annual address to the nation, January 12, 2023. Photo: Marcelo Garcia.

This Thursday, January 12, the president of Venezuela, Nicolás Maduro, presented his annual message to the nation before the National Assembly (AN) and the country, in accordance with article 237 of the Venezuelan Constitution. “Within the first ten days following the installation of the National Assembly, in ordinary sessions,” the constitution states, “the President of the Republic will present each year personally to the Assembly a message in which he will give an account of the political, economic, social, and administrative aspects of his management during the year immediately former.”

The head of state began his speech by recognizing the AN before which he was appearing. He recalled that, in previous years, he had to report before National Assemblies with a Chavista majority; before the opposition AN of 2016 with Henry Ramos Allup as president; before the Supreme Court of Justice (TSJ) by mandate of the Constitutional Chamber; before the National Constituent Assembly; and that this was the third time that he was reporting to the AN elected in December 2020, that was installed in January 2021.

“No matter who dislikes it,” he said, “I am before the legitimate power of the National Assembly of the Bolivarian Republic of Venezuela! Disregarding who screams in the world! Old and new empires, whatever they say!” Maduro also responded to Brian Nichols, the US Undersecretary of State for the Western Hemisphere, who recently posted on Twitter that the US government only recognizes the National Assembly elected in 2015, to which Maduro pointed out that US officials become millionaires by tweeting every time and everyday against Venezuela.

The president also referred to the United Kingdom, which issued a statement today “in the old-fashioned way, like the old empires, which issued royal edicts … in which it still recognizes only the 2015 Assembly as legitimate.” Maduro stated that it is “laughable, ridiculous that at this point they still lend themselves to farce, to lies.” He pointed out that there is no other assembly that generates laws, that works in the country. “The rest is Narnia,” he said, “a farce created in the midst of an aggression and a threat to recolonize Venezuela, which we knew how to face and defeat. It doesn’t exist! Not even the ashes were left from the old sell-out Assembly of 2015.”

“No one should interfere in the internal affairs of Venezuela,” the president stated. “Our affairs are decided by us, with our methods. And when there are elections, let the people decide with their conscience, and let whoever has to come, come.” 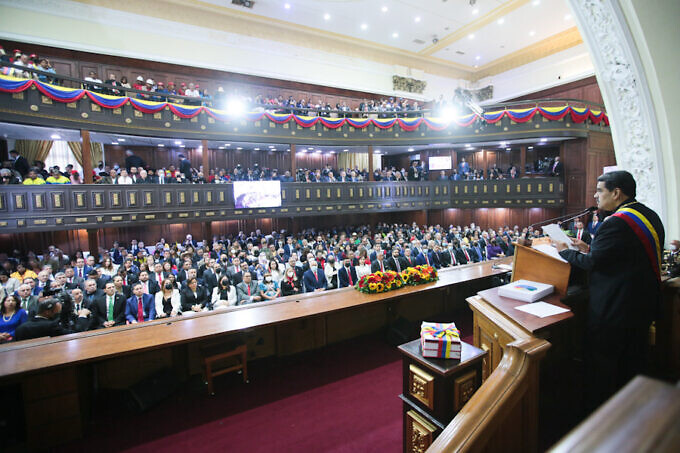 2022: A year of good news
Faced with the difficulties reported above, President Maduro stated that “[with] a necessary spirit of victory, progress, a new era was created, but all Venezuelans must know how painful the weaknesses of the sanctions are for public revenue.”

He presented the sectors most affected by the blockade and the illegal sanctions against Venezuela, which affect the government (42%), the oil sector (18%), and even the private sector (7.8%), as can be seen in the image below. 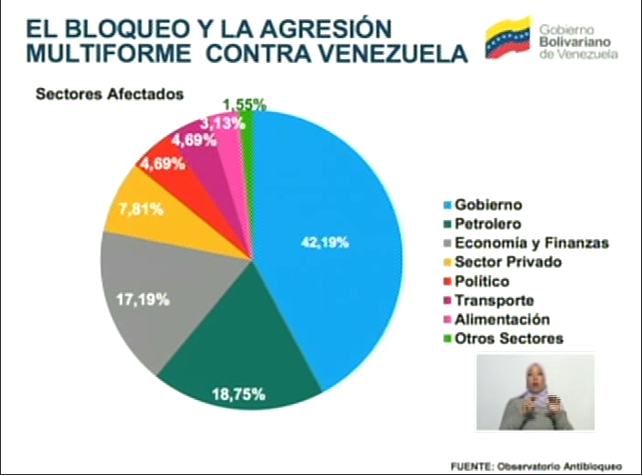 In another slide, he presented the moments in which oil production and gross revenues were most impacted, highlighting 2015 (Obama’s executive order), August 2017 (sanctions) and January 2019 (interim presidency and PDVSA sanctions). 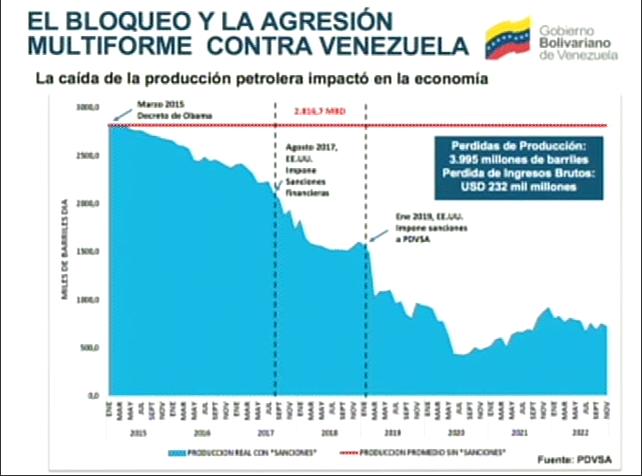 Maduro reminded the nation that there are more than 927 illegal sanctions illegally imposed by Washington against the Venezuelan people. He noted that in March 2015, when Obama’s executive order declaring Venezuela an “unusual and extraordinary threat to the US” was issued, Venezuela produced 2.8 million barrels per day. Calculating the accumulated loss from that figure, the country stopped receiving income from 3.995 billion barrels of oil.

“[Since 2015], the country stopped receiving $232 billion,” Maduro pointed out, “that would have gone to salaries, social rights, education, healthcare, infrastructure, as a result of the sanctions. Money that would have become $642 billion when incorporated and multiplied in the economic activity of the country, and what that would have implied in tax collection, job creation, wages and salaries, food and health.”

“National income fell to dramatic numbers. Today they are in dramatic numbers,” Maduro said. “Only 1% of what should enter the country entered the country. In these 8 years, Venezuela was robbed of $411 million a day from its pockets.” 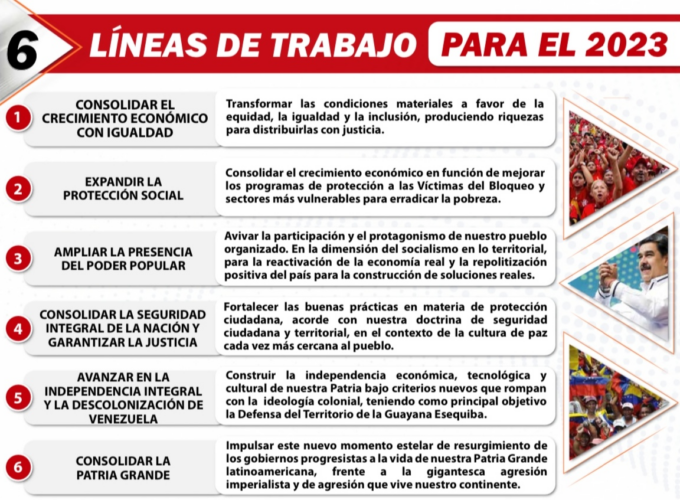 He stated that what has been experienced by the Venezuelan people, “[is] the biggest robbery that has been done on this earth since the Spanish conquest. What has been attempted to be stolen and remains sequestered is a multi-billion-dollar sum.” Maduro further recalled the Venezuelan gold that remains illegally seized in the Bank of England, and thus asked that the efforts that have been made “to defend the rights of the people” be valued. He also requested that, from Venezuela, it be said in one voice: “Enough of criminal sanctions!” he said, and to let the criminal conspiracies against his government cease, asking for proactive politics to be made.

Faced with this situation that has affected the Venezuelan people, Maduro stated that he deeply trusts the productive forces of Venezuela, including business and entrepreneurship. He indicated that, in 2022, there was a 15% growth in GDP, “the highest economic growth in Latin America and the Caribbean.”

To exemplify his point, the president showed a slide with the country’s growth in the last five quarters, from 2021 to the third quarter of 2022. 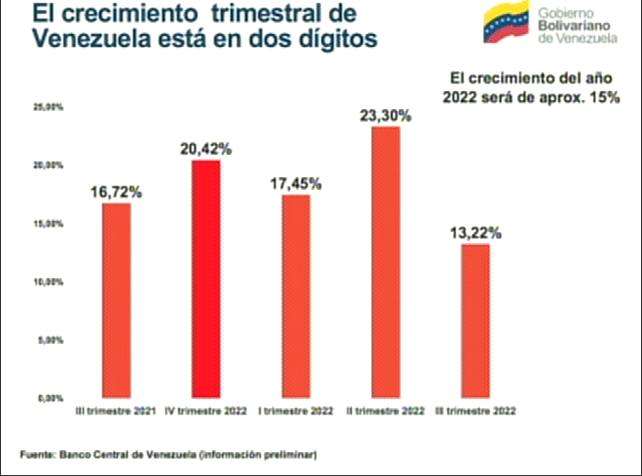 Wilmar Castro Soteldo, minister for agriculture, pointed out that since 2018—which was a very bad year for agriculture—there has been sustained year-on-year growth of between four percent and five percent. In 2022, 18.4 million tons of food were produced, and four million tons were imported. He said that the agro-industrial sector, out of the 17% that the overall GDP grew, made a contribution of 10.9%. He also recalled that 1.3 million hectares were formally placed in the hands of peasants thanks to land democratization policies. “By having their agrarian letters,” Soteldo said, “they have the option of requesting loans from banking institutions.”

Maduro indicated that bank deposits grew since January 2022 from $2.359 billion to $3.288 billion, noting that the increase in deposits and savings is a positive sign for the country. 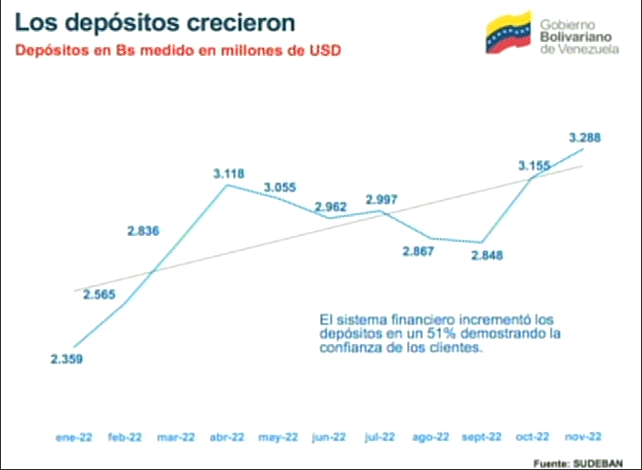 Maduro also presented another slide showcasing that credit activity grew from $163 million in January 2022 to $724 million in November 2022, which is an important indication of the boost to the economy. 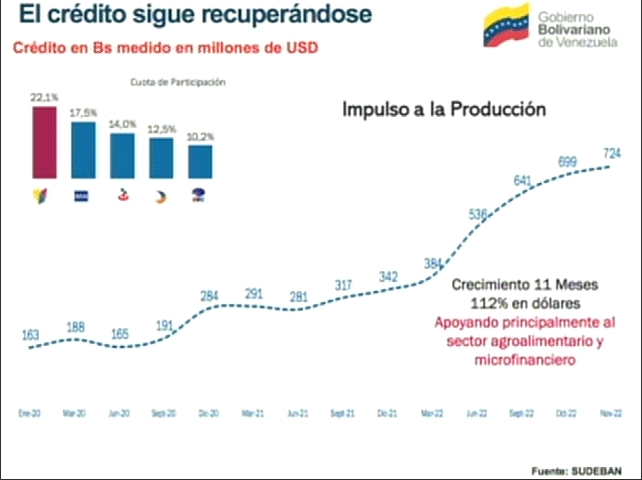 He then presented the increase in production in 2022 in items such as oil, rice, tuna, coffee, meat, wheat flour, chicken, pasta, milk, and sardines. 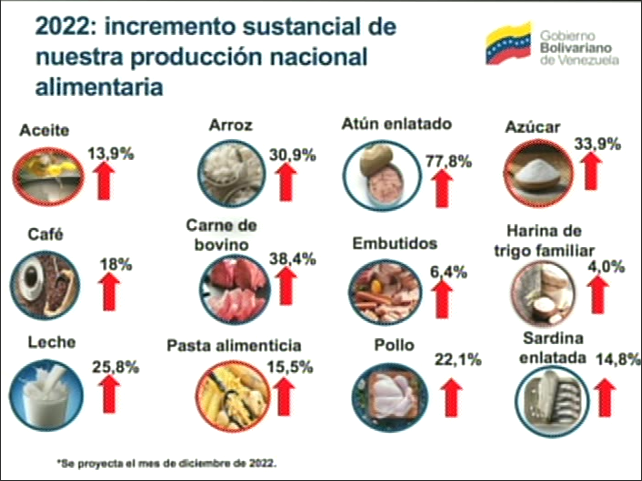 Maduro showed another slide with the growth in 2022 of industries such as virgin paper, corrugated paper, tires, footwear, lubricants, accumulators, and packaging. 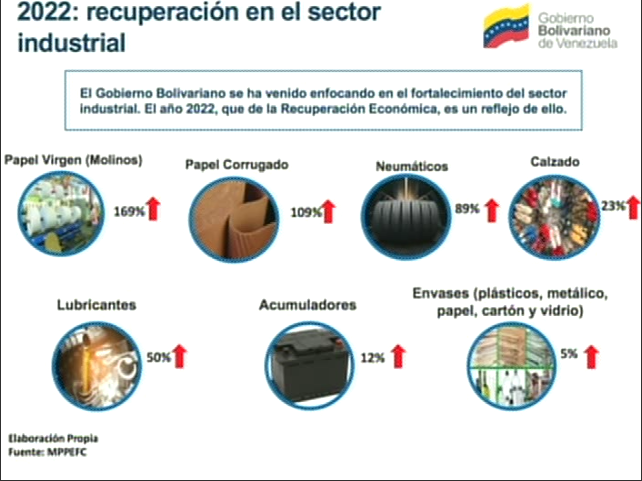 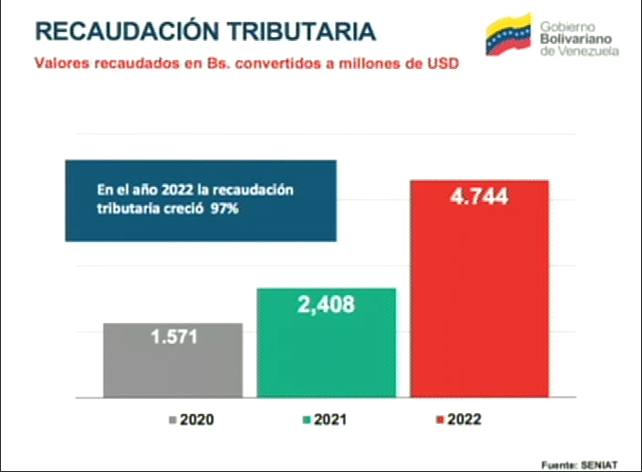 The President was received at the Federal Legislative Palace, before the deputies, by the president of the National Assembly, Jorge Rodríguez. The Supreme Court of Justice president, Gladys Gutiérrez, president of the Electoral Authority (CNE), Pedro Calzadilla, and president of the Poder Moral, as well as ambassadors, mayors and other authorities, were present at the ceremony.

On the outskirts of the Palace, he was also received by representatives of the delegations that received Guinness World Records in 2022 for the largest performing band of folkloric music—gaita zuliana—and for the largest casino salsa wheel performed in the world.