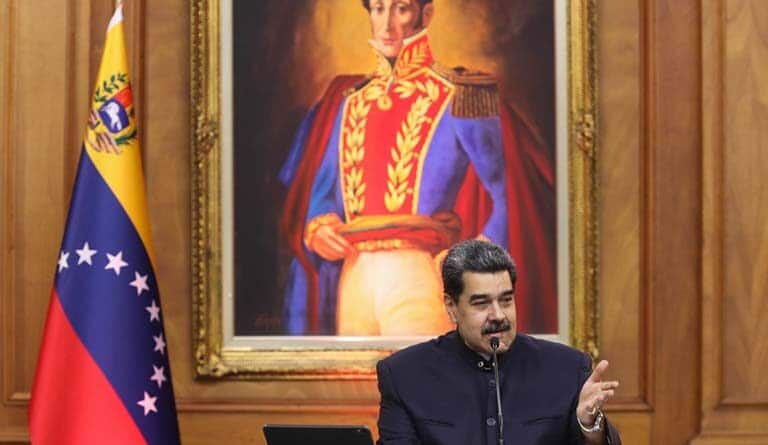 On Saturday, November 20, President Nicolás Maduro urged the European Union Observation Mission, which is currently in Venezuela as an international observer for the November 21 elections, to respect the country’s electoral process and legal framework.

During a meeting held with members of the International Accompaniment Program for the November 21 Elections, Maduro rejected the EU Mission’s intention to issue a final verdict on the validity of the Venezuelan elections.

President Maduro asked “can any international observer visiting any country in the world be the one to give a verdict on the validity of a distinctly national and sovereign election?” To which he considered that: “no! So the European Union Commission better get down from the clouds and act a little more humble and respect Venezuela’s legality.”

In the face of such pretensions of interference from the EU, Maduro asserted that Venezuela will know how to give its forceful political, institutional and diplomatic response in due course: “if you intend to hand out verdicts, violate our sovereignty and interfere in our internal affairs, you will receive the forceful political, institutional and diplomatic responses that Venezuela will be fully capable of giving when the time comes.”

Maduro explained that the EU’s behavior reflects “old colonialist superiority complexes which seek to humiliate other countries and impose, through direct or indirect blackmail, certain models of domination.” However, the president stressed that the peoples of the rest of the world “love our freedom, our sovereignty and our rights.”

“The peoples of the world will no longer stoop to anyone, no matter where they may come from. We consider ourselves equals among equals in the world of the 21st century. If you respect me, I respect you.” declared President Maduro.

Moreover, Maduro stated that Venezuela “wants peaceful, calm and happy elections” and stressed the legal authority of the current National Electoral Council (CNE) which was elected by the National Assembly (AN).

President Maduro added that “anyone registering and voting this November 21st is endorsing the National Electoral Council elected by the current National Assembly and chaired by Jorge Rodríguez.”

The president highlighted that 87 political organizations, including parties and coalitions of all tendencies, will participate in these elections, with more than 70 thousand candidates; they are all seeking to renew 23 government positions, 335 mayoral positions and all legislative and council nominations, which sum up to a grand total of 3,082.

President Maduro insisted that “we are getting ready to have a party. These are our political rights that generate legal rights, and whomever registers at the CNE recognizes the majesty of the Electoral institution and of the National Assembly chaired by Jorge Rodríguez.”

Maduro pointed out that in Venezuela there is a new Parliament that has fulfilled its constitutional role and which has legislated and approved more than 20 laws, in addition to appointing public office positions, including those of the CNE.

Furthermore, Maduro also made it clear that in Venezuela there is only one Constitutional President who is recognized by 92% of the people. An assertion which he backed up by citing data from several surveys carried out in the country.