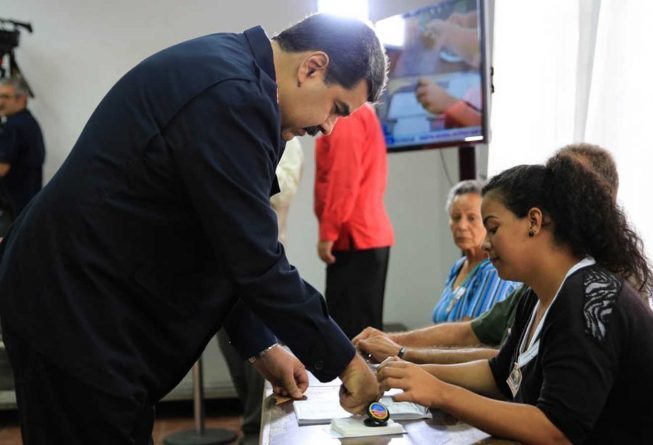 The President of the Republic, Nicolás Maduro, denounced on Sunday that a coup against Venezuela is [again] being prepared from the United States (USA).

After exercising his right to vote to the Municipal Councils, in the Miguel Antonio Caro HS in Caracas, he said that in the coming days he will give a press conference to give more details of the conspiracy from the White House.

“Today is underway, and coordinated by the White House, an attempt to disrupt the democratic life of Venezuela and attempt a coup against the democratic and free Constitutional Regime that exists in our country,” he said.

“I’m going to give a press conference these days to provide details and data of the conspiracy that comes from the White House,” while stressing that the American newspapers New York Times and Washington Post have accurate data of this conspiracy, as well as what happened in March of this year, which was neutralized by the National Government.

In transmission of VTV, he pointed out that despite the conspiracies and accusations of a supposed dictatorship in the country, the Venezuelan people remain sovereign and are the only ones who, exercising their right to vote, choose their deputies, aldermen, legislators, governors, mayors, and president [without direction from foreign governments].

In this regard, he noted that since the last speech of the leader of the Bolivarian Revolution, Hugo Chávez, on December 8, 2012, nine elections have been held in the country.

Among them he said that there are two elections to governors, two of president, two of mayors, one of National Assembly, one to the National Constituent Assembly and the current one for Municipal Councils.

He pointed out that in the last 16 months, after the violent actions promoted by sectors of the right and lasting 120 days of violence, five elections were held, which have guaranteed peace in the country and defeated the guarimba promoted by violent sectors of the opposition.

The president also greeted and congratulated the chairs of the National Electoral Council (CNE), and all its workers and technicians, as well as the members of the Bolivarian National Armed Forces for the realization of these elections in total tranquility.