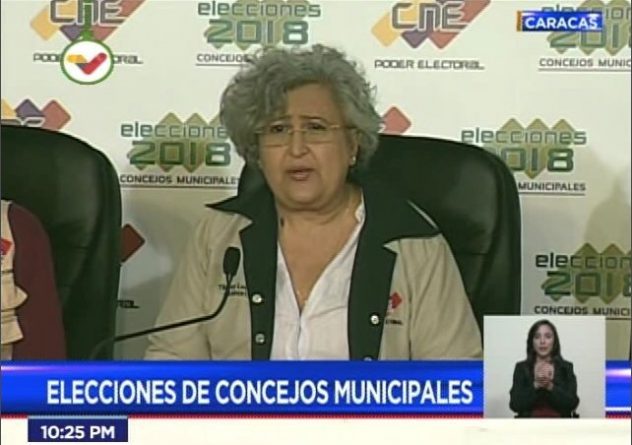 Tibisay Lucena, Chair in Chief of the National Electoral Council, reported at a press conference this Sunday at 10:24 pm that, with 92.30 percent of records received and 27.4 percent participation (abstention of 72.6 percent), and 156 lists of alderman are conceded , and 142 of them are conceded to the alliance of the United Socialist Party of Venezuela (PSUV ). Likewise, 467 nominal charges are already concede and 449 of then to the PSUV. Thus, the United Socialist Party won 91.02% of the aldermen/alderwomen by lists awarded so far, and 96.15 percent of the nominal.

In total, there are 335 lists of aldermen/alderwomen nationwide, of which 156 are conceded until now and 179 are not being awarded yet.

There are also 702 nominal posts, of which 467 are already awarded and 235 remain to be awarded.

Lucena indicated that the local boards of the CNE are already authorized to give results at the municipal level.

[It’s important to highlight that in the last 20 years the municipal election that got more participation was the one from 2013 with a participation of 58.36 of the electorate, in 2017 the participation was 47.32. It worth mentioning that in both cases Mayors were elected which was not the case for this election, reducing significantly the willingness to vote].