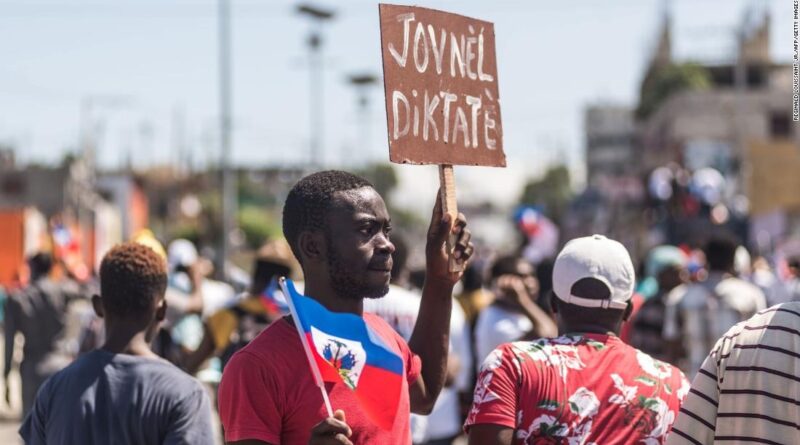 February 22, 2021.-  Protests continue in Haiti against the dictatorship of Jovenel Moïse and the neo-colonialist, imperialist forces propping him up. Tens of thousands took to the streets in Haiti’s capital Port-au-Prince, on Sunday, February 21, two weeks after the official end of the presidential term of Moïse, according to the constitution. However, Moïse has refused to hand over power alleging discrepancies in the interpretation of the constitution and with regard to the official start of his time in office.

Protesters are demanding that Moïse resign after illegally overstaying his mandate in office, illegally redrafting the constitution, and calling for elections in September 2021. Various opposition parties have already convened and formulated a proposal for a transitional government to recover the country from the deepening institutional crisis caused by Moïse. Supreme Court Judge Joseph Mécène Jean-Louis was appointed as the interim president. Jean-Louis’s transitional government, who has the support of the country’s civil society organizations, is to administer the country for the next two years and organize elections for the next government, according to the proposal.

RELATED CONTENT: Canada Must Stop Propping Up a Repressive and Corrupt Dictatorship in Haiti

Another Sunday, another mass protest in #Haiti against imperialism and dictatorship. Haitians are determined to resist any and all attempts to impose a neoliberal puppet dictatorship in the country. pic.twitter.com/04m7XRwUMR

However, despite overwhelming rejection of Moïse and his de facto rule, he continues to enjoy support from the “Core Group,” composed of the ambassadors of Brazil, Canada, France, Germany, Spain, the European Union, the United States of America, as well as representatives from the UN and the OAS. The members of the Core Group, as well as the group itself, have expressed support to Moïse and publicly reiterated that elections should go ahead this year as planned.

The protests this week in Haiti have an added focus of denouncing the backing of Moïse by these imperialist forces. Signs reading “Long live the revolution and the US should stay out of it [mind their own business]” and “The Haitian People Can’t Breathe. Down with the Core Group” were seen far and wide.

Pro-democracy protests grow in #Haiti's capital as @moisejovenel is denounced as a dictator who must resign before next elections can be held. pic.twitter.com/FKWbgrdzNt

Internationally, solidarity initiatives are growing to call on governments part of the Core Group to rescind support for Moïse. A group of over 100 activists, human rights defenders and writers signed a letter addressed to Canadian prime minister Justin Trudeau calling on him to withdraw support to Moïse’s illegal power grab and highlight the complicity of the government in propping the dictatorship up: “The Canadian ambassador in Haiti has repeatedly attended police functions all the while refusing to criticize their repression of protesters. On January 18, ambassador Stuart Savage met the controversial new head of police Leon Charles to discuss ‘strengthening the capacity of the police.’ As part of the influential US, France, OAS, UN, Spain “Core Group” of foreign ambassadors in Port-au-Prince, Canadian officials have offered Moïse important diplomatic support. On February 12 Foreign Minister Marc Garneau spoke with Haiti’s de facto foreign minister,“ the letter said.

Brutal repression by state security forces of the protesters has also continued. On February 6, a protester Romario Saintrilice was brutally beaten when he was unable to run from police officers. According to reports, he was beaten so hard he vomited his internal organs and died 3 days later on February 9. Cases such as that of Romario Saintrilice have highlighted the brutality of the US-trained police officers. This repression continues till today but Haitians continue to demand a return to democracy and a return to institutional order.