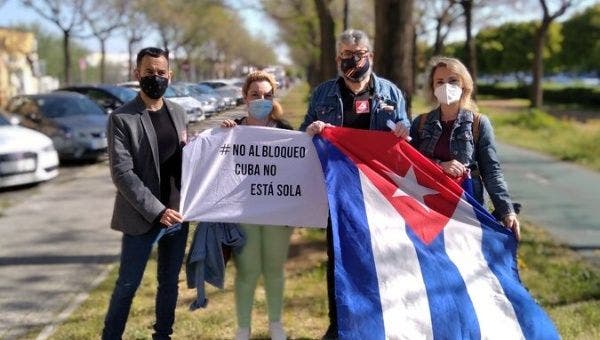 Citizens and organizations from at least 60 countries on five continents have begun activities this Saturday to demand the end of the U.S. economic, commercial and financial blockade against Cuba.

In a worldwide day, the initiative launched a month ago by the Europe for Cuba channel, in coordination with solidarity movements and groups in different parts of the planet, will take place today and tomorrow, Sunday, with car and bicycle caravans, rallies, marches and mountain climbing, among other diverse actions.

“The call is also to flood the social networks in days of denunciation and repudiation of the genocidal blockade imposed on the island, in which we expect a good response, despite the restrictions derived from the COVID-19 pandemic,” José Antonio Toledo and Michele Mesagna, coordinators of the platform, told Prensa Latina.

They also assured that this first global caravan is only the beginning of activities that will last as long as Washington’s criminal policy applied to the Caribbean country for more than six decades remains in force.

In the past days , cities in France, Ireland and Sweden kicked off the actions of global rejection of the blockade against Cuba.

In the southwestern French town of Périgueux, around 40 people took part in an event organized by the Cuba Linda association, in which they unfurled a banner against the siege that seeks to suffocate the people of the island.

Senator Marie-Claude Varaillas and the leaders of the French Communist Party Laurent Péréa and Julien Chouet expressed their condemnation of the blockade and stressed the injustice it represents, by attacking a nation that shows solidarity and is very active in helping others in times of pandemic.

Banners against the blockade were also used in Dublin and Gothenburg, while in the mountains of Harjedalen the Swedish-Cuban Solidarity Association waved the Lone Star flag.

Cuban President Miguel Díaz-Canel today highlighted and thanked the world caravans against the U.S. blockade organized by emigrants and friends of the country.

Through his Twitter account, the president stressed that in 50 cities around the world this initiative will take place to demand an end to Washington’s economic, commercial and financial siege of the island.

“Thank you compatriots abroad, friends of all nationalities. The fight for what is right unites us,” he added.

“This weekend, in half a hundred cities around the world, there will be caravans calling for the end of the blockade of #Cuba. Thank you compatriots abroad, friends of all nationalities. The fight for what is just unites us. #TogetherXCuba #NoMoreBlockade

Among the most recent announcements, the Italian-Cuban Association For a Dwarf Prince confirmed its participation with a virtual caravan that will join the international parades of cars, motorcycles, bicycles, walks, marches and acts in public spaces.

The editor-in-chief of Diario Latinoamericano and administrator of the NoBloqueoCuba.com page, Manuel Tejeda, maintained that the humanitarian and family character of the global caravans influences the great support from various sectors.

RELATED CONTENT: Cuba Lashes Out at the OAS ‘Depressing Show of Lies’ Against it

“The project began nine months ago in the city of Miami, United States, and since then every last Sunday of the month has more participants,” he explained to Prensa Latina.

According to the official website of the island’s Foreign Ministry, the YouTube channel Europe for Cuba will launch calls in some 40 nations around the world to participate in this weekend’s mobilizations.

“The days of solidarity will extend to Asia, Oceania, Africa, America and Europe,” Cubaminrex points out.

The Cuban Foreign Ministry stresses that the blockade constitutes the greatest obstacle to national development and a violation of human rights.

“The accumulated damages in six decades amount to 144 billion 413 million dollars, and between April 2019 and March 2020, the action caused losses in excess of five billion dollars, a record figure for one year,” it emphasizes.

As part of the actions in Russia of the International Caravan against the U.S. blockade on Cuba, the Comandante Aerostat took to the sky today from the outskirts of Moscow.

With the image of Ernesto Che Guevara and his message demanding an end to Washington’s economic, commercial and financial siege of the island, the balloon’s ascension was one of the initiatives of the organizations in solidarity with Cuba in the midst of the restrictions established due to the epidemiological situation caused by the COVID-19.

Participating in the activity were the Cuban ambassador to this country, Julio Garmendía; the president of the Russian Society of Friendship with Cuba, Aleksei Lavrov; and the head of the Russian Committee for the elimination of the blockade against Cuba, Lena Loshkina, among other friends of the island.