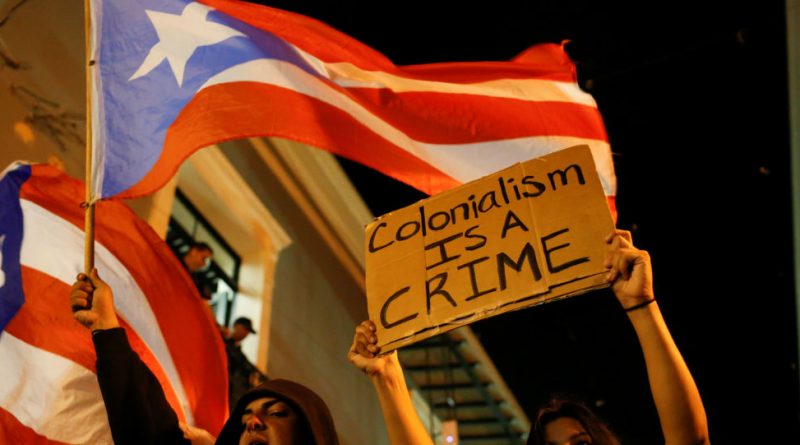 The current revolt in Puerto Rico confirms what all the rulers on duty forget as soon as they come to power: you cannot play with the interests of the people, challenge, despise, lie to them and make them succumb more and more in inequality and poverty, as is happening in Borinquen, as this country is also called.

For 12 days hundreds of Puerto Ricans overflowed the streets, not only of the capital San Juan, but of all the towns of the island to express their outrage accumulated by corruption cases revealed after the leak of 889 pages of chats on Telegram between the governor Ricardo Rosselló and the 11 main advisers and cabinet members using profanity, sexist, homophobic and misogynist language against their opponents. Such was the anger of the Puerto Ricans, that their governor Ricky had to yield to the will of his people and resign his position.

The current popular revolt of Puerto Ricans surpassed the mass demonstrations of 2001, when Puerto Ricans invaded the streets of the country forcing the federal government of the United States to order the departure of sailors from the island-municipality of Vieques, after 60 years of permanence in Nena Island, turning that paradise into an ecological disaster with a high incidence of cancer in its inhabitants.

However, at that time the victory of the people was partial because the federal government secured its hegemony on the island by transferring the power and control of its vast territory to the Federal Fish and Wildlife Service and not to the Free and Associated State of Puerto Rico.

Now, after 11 years of suffering and silence, the Puerto Ricans again managed to impose their will by achieving the resignation of Ricardo Rosselló, who they chose in 2017 believing to opt for “the least bad” but who turned out to be an even worse leader than the previous ones supposedly “more bad.”

To understand all this mess we would have to resort to the opinion of the analyst Salvador Tió Fernández, who explained that in Puerto Rico “we have a situation of colony under a Free and Associated State of the US since 1952, which is neither a State, because we do not have a State status, is not free and is not associated … Puerto Rico has been left, dominated, colonized, abused and discriminated against” for many years by the United States.

The tragedy of Puerto Rico began in1898, when American troops invaded the Island of Enchantment. The American president William McKinley (1897-1901), after Washington’s invasion, began to strip the wealth of the Creole class by devaluing the Puerto Rican currency against the dollar, while forming an administration on the island that followed to the letter the orders of the North American government.
During all these 121 years, the life and destiny of Puerto Ricans was determined by Washington. Until now, its commerce, foreign relations, immigration policy, its natural resources, treaties, media continue to be under the strict control of the White House.

Currently, more than 15 US bases of the US Atlantic Command operate on the island, while the country has been virtually bankrupt since 1970 and its rulers have no north or direction to alleviate the debt that has been going out of their control, not only due to corruption and poor management of the economy, but as a result of the poorly planned or simply neglected federal government policy applied to Puerto Rico.

The economy of the island, since the middle of the last century, has been based mainly on the pharmaceutical industry, but with the appearance of the maquiladoras in Central America and in Asia, the North American corporations began to leave Puerto Rico.

In addition, since the 1970s, Washington authorized subsidiaries of US companies operating on the island to transfer their profits to parent companies without paying federal taxes, which further weakened the Puerto Rican economy. The banking and mortgage crisis, at the beginning of this 21st century, was another blow to the island’s economy.

In 2006, Governor Aníbal Acevedo Vilá, alarmed by the weak GDP growth, decided to suspend the tax exemption for corporations that were still operating on the island. The country went into recession and Puerto Rican migration mainly to New York, Florida, Illinois, Massachusetts, Pennsylvania, Connecticut and New Jersey grew alarmingly.

It is estimated that, currently, about five million Puerto Ricans reside in the US. According to statistics from the US Department of Education, almost 500,000 Puerto Ricans could emigrate to the continent in 2019 due to a strong economic crisis that worsened after Hurricane Maria hit the island in 2017, resulting in more than 5,000 deaths during and after the disaster, according to Harvard University Study on Puerto Rico, 2018.

Due to the inefficiency of both the federal government and the local authorities, the inhabitants of the island had to live 11 months without electricity. According to data collected by the newspaper El Vocero.com , poverty in 2018 shot up to 60%, affecting 1.5 million inhabitants of the total 3.2 million Puerto Ricans, of which 800,000 were in a state of destitution. The unemployment rate recognized by the Government reached 12%.

RELATED CONTENT: Puerto Rico: People on the Street Have Managed to Get Rid of Roselló – Euphoria Throughout the Country

The public debt was completely out of control, which forced the Government of Barack Obama to put Puerto Rico under the Fiscal Oversight Board (JSF) that ordered strong austerity measures in 2016. The situation reached such an extreme that in the 2017 referendum, 97% of the Puerto Ricans who participated in the vote (509,000 of the total 2.2 million eligible to vote) expressed their desire to become citizens of the US state #51, to which neither the US Congress nor the White House paid any attention.

Already in January 2018, a group of 20 prominent American academics and economists called on President Donald Trump and Congress to facilitate a fiscal plan for Puerto Rico that recognizes that the public debt of $ 72 billion is unpayable and that austerity cannot be an alternative and economic injection measures are required for the island.

In response to this suggestion, the US president assigned the Government of Puerto Rico 15,000 million dollars in February last year to mitigate the disaster caused by Hurricane Maria. Recently, Donald Trump declared that “the US Congress foolishly gave $ 92 billion to Puerto Rico for hurricane relief and a large portion of the money was stolen”.

However, nothing is really known about this amount of money, but what The New Herald revealed makes the picture a bit clearer. It is not known how much, but one part of the money was given to the Rosselló Government, the other to the Fiscal Supervisory Board (JSF) and the larger part to the Federal Emergency Management Agency (FEMA).

The latter hired, according to the newspaper El Nuevo Herald, companies for the reconstruction of the island without any experience, some of whom had never done assigned work. All this mess reveals not only the corruption of the Rosselló Government, but also involves several US federal agencies and departments.

Finally, it was the Puerto Rican people who had to suffer the consequences and widespread cynicism of federal and local authorities. The people rose up and managed to get Governor Ricardo Rosselló out of power. However, the history of the struggle of this people for their sovereignty, ranging from heroes such as Eugenio María de Hostos, Pedro Albizu Campos, Lola Rodríguez de Tió, Ramón Emeterio Betances, Lolita Lebrón, Filiberto Ojeda and other patriots, demonstrates that all the riots have always had a limited result.

The union of the Puerto Ricans has always given way to disunity in the medium and long term. We must not forget the 121 years of American rule and the increasingly sophisticated and ruthless repression that has weakened – if not already broken – the soul of this heroic people.

Of course, the current revolt brought down Governor Ricardo Rosselló, who said he will leave his homeland on August 2 and move with his family to the mainland. Will something change in the country with his resignation? For now, do not expect serious changes.

The next governor of Puerto Rico, the current secretary of Justice, Wanda Vázquez, who will assume this position beginning next August 2, committed, according to the Puerto Rican journalist Sandra Rodríguez Cotto, a series of actions that disable her to be a secretary of Justice and governor for being co-author of the cover-up and architect of corruption schemes that precisely accelerated the departure of Ricardo Rosselló from power.

The journalist reveals the reluctance of Wanda Vázquez to initiate an investigation into the 889 pages of Rosselló’s chats, while being his lawyer; the violation of Article 262 of the criminal code of breach of duty, Article 263, negligence in the performance of duty, and Article 280 of disguise for refusing to investigate irregularities and rattles related to the United for Puerto Rico program of assistance to affected by Hurricane Maria. It turned out that eight loads of this help were mysteriously lost. The journalist also presents several other cases of violation of the law committed by the next governor.

Nor should we forget that the disastrous Fiscal Oversight Board (JSF) that dictated austerity measures, including the retirement pension reduction, the closure of more than 100 schools, squandering of public funds in undue salaries and hiring, created conflicts of interest, it remains intact on the island continuing its policy according to the neoliberal model dictated by Washington.

The people cried during 12 days of revolt: “Ricky resigns and takes you to the meeting.” Ricky resigned, but the board, which actually gave orders to the governor, stayed in place and, with its omnipotent power, it’s as if nothing happened. This is Puerto Rico.

In Fernando Picó’s book entitled “General History of Puerto Rico”, the author asks “What has happened to Puerto Rico? What are we? What do we want to be, if what we have achieved so far has been to build, unconsciously, our own Encerrona? Why, with the unwavering insistence of an abused person, are we still subordinate to a United States that has never given explicit signs of wanting to end this colony”.

Everything indicates that the 121 years of colony and bloody repression by the US killed the soul of the Puerto Ricans, but it is never too late and hopefully new generations will find answers to these questions!