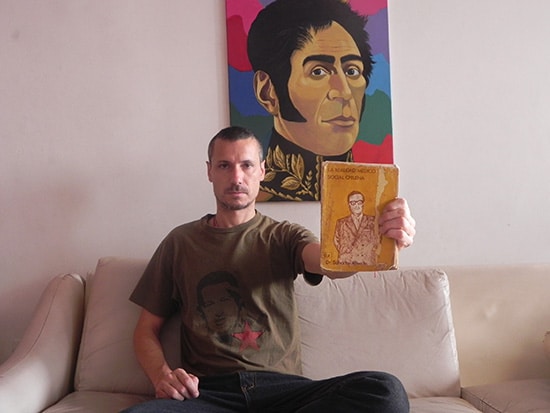 Editorial note: Orinoco Tribune does not publish articles that are over two weeks old, but sometimes we make exceptions. The following note was originally published almost three years ago; however, with the victory of Gabriel Boric in the Chilean presidential race on Sunday, we consider it important to take another look at it. In the midst of the joyous celebrations in Chile for Boric’s win against pinochetista Kast, and perhaps as a response of memory to some who are exaggerating too much about the president-elect to compare him with Salvador Allende, with Pablo Neruda or with other icons of the international left, a text by doctor Pablo Sepúlveda Allende, grandson of Chile’s former President Salvador Allende who was overthrown and assassinated in 1973, has been circulating on social media as well as on some online publications. Said text was an “open letter” in response to statements made by the Frente Amplio deputy—now president-elect—Gabriel Boric, who has repeatedly called on the Chilean left to “condemn the human rights situation” in Cuba, Venezuela, and Nicaragua, all of them Latin American countries with socialist projects. It is worth rereading it, in order to have all the information at hand and not just those which are being amplified by the logical enthusiasm generated by Kast’s defeat.

Doctor Sepúlveda Allende’s open letter to Boric is translated and reproduced below:

Deputy, I dare to respond to you because I see the danger that it represents for important leaders like you, young referents of the “new left” that has emerged in the Frente Amplio, to make simplistic, absurd and misinformed comparisons on issues as delicate as that of human rights.

It is very biased and rude that you equate—without the slightest argument—the supposed “weakening of the basic democratic conditions in Venezuela,” the “permanent restriction of freedoms in Cuba” and “the repression of the Ortega government in Nicaragua” with the proven atrocities of the military dictatorship in Chile, the evident criminal interventionism of the United States around the world, and the State of Israel’s terrorism against the people of Palestine.

The fact that you write such nonsense does not “make you a pseudo CIA agent,” but it does denote a significant irresponsibility and political immaturity that can transform you into a useful idiot for the right-wing, or worse, make you end up being that “left” that the right craves: a dumb, ambiguous left, a harmless left which, due to opportunism, prefers to appear as “politically correct,” a lukewarm left that does not want to have problems with anyone.

Such a left is confusing, because it does not dare to point out and courageously confront the true enemies of the peoples. Hence the danger of issuing politically immature opinions.

Have you ever wondered why Venezuela is being so vilified and attacked in the media? Why is it on the news every day in practically all the countries of the Western world where the mainstream media dominate? Why is it outnumbered and attacked from all sides? Why do these big newscasts keep quiet about the continuous massacres in Colombia and Mexico? Why do those who tear their hair out worrying about a Venezuelan deputy who confessed to participating in an assassination attempt not have the courage to demand that Israel stop the genocide of the Palestinian people?

A world upside down. That is the world of politics without heart and without courage.

Margarita Labarca Goddard [Chilean human rights lawyer] has already argued clearly and forcefully why you are mistaken in your judgments towards Cuba, Venezuela and Nicaragua. I will only add that Venezuela has a much healthier and more transparent democracy than the one in Chile, if you wish I can point out my arguments to you and we can have a debate, if you are interested.

It is also easy to argue why the “permanent restriction of liberties in Cuba” is a fallacy. Not to mention that the word “freedom” is so misused that by now its true meaning is ambiguous, and a sensible definition requires even a philosophical debate. Or tell me, what is freedom?

I name these two countries because I know them quite well. I lived in Cuba for nine years and in Venezuela I have been living for another nine. I do not know Nicaragua first-hand, but I invite you to ask yourself what would have been the reaction of a right-wing government to the actions of hired and heavily armed criminal gangs who took over whole sectors of the most important cities in the country. Additionally, said mercenary gangs were organized to commit abominable acts such as kidnapping, torture, maiming, rape and even burning dozens of human beings alive, for the mere fact of being sympathizers of a cause—in this case, Sandinistas. The persecution reached the point where entire families were murdered in their own homes.

Even with the resources, the legal framework, and the strength to take immediate forceful action against such fascist destabilization, the legitimately elected government of Nicaragua exercised restraint. Do you think that if a right-wing government had been in power, they would have had such a conciliatory position and would have called for dialogue to resolve the conflict?

RELATED CONTENT: Gabriel Boric Victory Speech: ‘I will be the President of all Chileans’

I understand that you may have been confused by the powerful “media” that took upon itself the charge of victimizing the perpetrators, just like they did a year ago in Venezuela during the time of the so-called guarimbas.

Therefore, Gabriel, objectively speaking and through a serious argumentation—and not opinions formed and shaped by a media that repeats misrepresentations and lies on a daily basis—there is no such thing as a double standard by which we defend Cuba, Venezuela and Nicaragua.

These countries do not have disappeared or tortured people; they do not imprison those who think differently, but yes, they imprison criminals, be these deputies, politicians or so-called students. Rather, it seems to me that you are the one with the “double standards,” issuing comfortable judgments of morality formed through manipulation and ignorance,

When it comes to the media, democracy and freedoms, we could compare Chile with these countries. I assure you that, unfortunately, Chile would not fare very well, and even less so, if we include human, economic and social rights, since in Chile these seem to be nothing more than merchandise.

“A person reaches his highest level of ignorance when he repudiates something of which he knows nothing.”

Featured image: Pablo Sepúlveda Allende, a doctor, a coordinator of the Network of Intellectuals in Defense of Humanity (REDH), and grandson of former President Salvador Allende Gossens, responded to now president-elect Gabriel Boric over his position on Cuba, Venezuela and Nicaragua. Photo: The Clinic