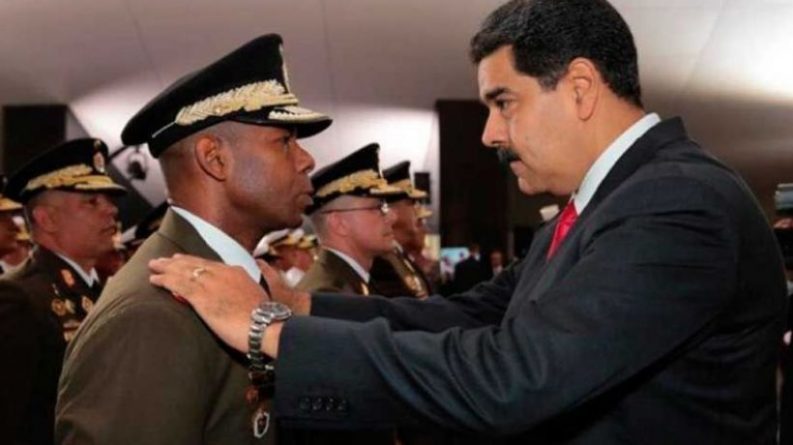 International Opinion
May 11, 2019May 11, 2019 eferrari10 coup d’etat, Manuel Ricardo Cristopher, President Maduro, sanctions, Sebin, Trump not knowing what to do, US Sanctions

The United States lifted sanctions against the former director of the Sebin.

The announcement made on Tuesday by Vice President Mike Pence on the lifting of sanctions on the former director of the Bolivarian National Intelligence Service (SEBIN), Manuel Ricardo Cristopher Figuera, an accomplice in the failed coup executed on April 30, is a starting point to trace the true motivations of these punitive measures.

The Treasury Department supported this announcement by publishing a press release which also emphasizes that the sanctions “do not need to be permanent and are intended to provoke a positive change in behavior,” referring to the call for military desertion heeded by the division general.

His intervention in the coup led to the escape of the anti-Chávista leader Leopoldo López, who was present at the Altamira highway bridge driving the calls to depose the government of Nicolás Maduro, next to the deputy in contempt, Juan Guaidó, together with an arsenal of arms and ammunition.

The former head of SEBIN was expelled and demoted along with 55 other soldiers implicated in participating in these events.

CASES OF SANCTIONS AGAINST OFFICIALS AND SUPERFICIAL MOTIVES

The chronology of the siege of Venezuela by the Trump Administration (and Obama’s) contains, in addition to the financial blockade, sanctions against public figures of Chavismo who hold positions of high responsibility within the nation.

The package of prohibitions is usually constituted by the freezing of assets that those sanctioned “may” have in the United States, the exclusion of any type of transaction with US institutions or persons, and the prohibition from entering the country.

So far, the reasons that the US government has granted to justify these measures have to do with the alleged violation of the human rights of civil society, the misappropriation of Venezuelan assets and authoritarian measures. Then, the sanctions would come to be a kind of protection of the interests of the population against a “repressive and corrupt” government.

These are some of the sanctions to individuals that swell the list of the Department of the Treasury:

In March 2015, after the so-called Obama Decree that named Venezuela as an “unusual and extraordinary threat,” the then president of the United States proceeded to issue an order sanctioning seven officials, including the then director of SEBIN, Gustavo González López (again in the position); the REDI Commander of the central region of the FANB;and the President of the Corporación Venezolana de Guayana.

RELATED CONTENT: “Deep Admiration and Gratitude”: Maduro to Embassy Protection Collective in the US

In a document published by the White House, it is mentioned that the motives of the order are “the erosion of the guarantees of human rights, the persecution of political opponents, the restriction of press freedom, and (…) the arrests of anti-government protesters, as well as significant public corruption of high officials of the Venezuelan government.”

In May 2017, the Treasury Department, through the Office of Foreign Assets Control (OFAC), sanctioned the president of the Supreme Court of Justice, Maikel Moreno, along with seven other members. The measure occurred in the middle of the coup agenda that the National Assembly in contempt (led by Julio Borges) promoted at that time.
Steven Mnuchin, Secretary of the Treasury, argued that the measure was against the Constitutional Chamber because its members “interfered in the authority of the legislature.”

On September 25, 2018, sanctions were extended to Venezuelan officials, adding the first combatant Cilia Flores; the Minister of Defense, Vladimir Padrino López; the Vice President of the Republic, Delcy Rodríguez; and the Minister of Communication, Jorge Rodríguez, on the grounds of “being involved in corruption and drug trafficking activities.”

The name of Figuera was added in January of this year to the Treasury Department’s black list along with that of Iván Hernández Dala, commander of the Directorate General of Military Counterintelligence (DGCIM), and Manuel Quevedo, president of the state oil company Petróleos de Venezuela (PDVSA).
On the sanction against Manuel Figuera and other figures of the security and intelligence apparatuses of the Venezuelan government, Mnuchin argued that they had “systematically violated human rights and suppressed democracy, including through torture and other brutal uses of force.”

COERCION AND BLACMAIL: COMPONENTS OF A DIVISIONIST MANEUVER

At the beginning of February of this year, John Bolton said that the United States would consider “withdrawing sanctions against any high Venezuelan military position that supports democracy and recognizes the constitutional government of President Juan Guaidó.”

The defection of Figuera, and his contribution to the coup attempt of Guaidó, was the opportunity for the United States to show that it is capable of keeping its word, by eliminating the sanctions issued months ago against the military.

It is also clear that the motives of the sanctions have never been the concern for the violation of human rights and corruption, but rather they are instruments to influence the decisions of key figures in the government’s roster that lead to institutional fracture.

However, Figuera is a pyrrhic victory compared to the solidity that the military high command maintained before the attempted coup and the so-called blackmailers from the White House, which followed in successive days.

The recent coup scenario shows at a glance how from now on the sanctions will be used under the key of extortion. In this way, Venezuelan officials and military will be invited to leave the list of the sanctioned only if they take a position in favor of the fictitious government that Washington protects.

This is how the US intends to nurture the longed-for deserters’ front that would attempt the overthrow of Nicolás Maduro.