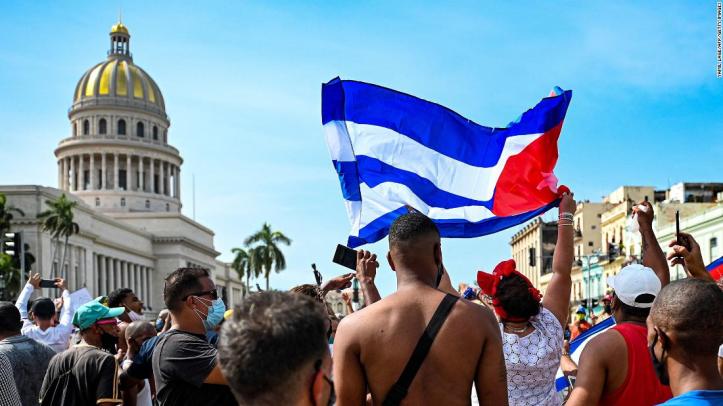 The lightning speed of the organisers and signatories to the Frank García petition campaign, as well as the speed and assuredness of the statements and positions of the anti-Cuba socialists more generally, indicates that what drives them is not so much the events on July 11 or its aftermath – about which the leaders of this push did not stop to check the facts. Rather, their various statements and positions, their overall attitudes and interpretation of what information has come to light, express pre-existing ideas about Cuba that already existed in the heads of the different groupings.

Activists from the tradition known as the International Socialist Tendency (IST) – which includes Socialist Alternative and Solidarity in Australia – think the Cuban revolution is not even socialist at all and never has been, but is “state capitalist”, even “Thatcherite” and “neoliberal”. This is a long-held perspective, not new facts coming to light between July 11 and July 12 that determines what Callinicos and others think about July 11.

Within the IST world view even the over-throw and destruction of the Cuban state – which has resisted U.S. imperialism for 60 years – is not seen as a set-back to the class struggle or as something truly important. Any sort of anti-government protests in Cuba, including right-wing protests under the banner of “democracy” and “freedom” are viewed favourably. Where possible, these are spun as some sort of left wing or at least legitimate democratic movement worthy of support against the ‘regime’.

The petition campaign obviously played the role of spinning any opposition movement as left-wing. By falsely presenting the Cuban government as involved in “suppression of critical communists”, just at the very moment when there is a series of mobilisations in Cuba – including violent protests the Cuban state was actually forced to suppress – the petition was obviously telling its left-wing audience that an important part of the opposition protests was on the left.

LEFT CRITICISM
The IST’s “state capitalist” vision of Cuba is probably the most theoretically convoluted and unlikely of all the competing views. However, there are other socialists, with different theories, who also exhibit similar hostility to the Cuban leadership. Various socialist opponents and critics of Cuba have some key ideas in common. The Cuban leadership is said to be anti-democratic, repressive, bureaucratic, and responsible for economic mismanagement and inefficiency within the state sector of the economy.

Perhaps the most important and commonplace criticism is that the increased space now permitted in the Cuban economy for private capital is a sell-out or retreat from Socialism, or that this fact indicates the Cuban Communist Party’s (PCC) intention to guide Cuba back to the capitalist world. In many cases this criticism is levelled by simply pointing to one or more of the economic policies that give greater space for the market to operate and suggesting the negative consequences these entail without explaining how such measures could be avoided.

Of course there is some truth is many of these criticisms. It does not take long to find someone in Havana, Santiago or other Cuban localities – including PCC members – who will agree that there are many problems with economic inefficiencies or that there is some degree of bureaucratism. Anyone who follows Cuba at all knows that those things have been officially acknowledged, and tackled, in what is an ongoing struggle – for decades.

RELATED CONTENT: Should the Cuban Revolution Hold on to Power? Part 1: The Account of Comrade Frank García Hernández Versus That of His Overseas ‘Friends’

Nor is it at all controversial to point out that permitting certain types of private capitalist markets and businesses creates serious injustices and contradictions. Obviously, that is the nature of capitalist private property. It is exploitative, alienating and unjust – as is the tourism industry which Cuba has also been forced to rely on. Again, this is hardly news to Cuban communists or anyone else. Fidel Castro who spearheaded the first round of market reforms in the 1990s once described private food traders as waging a war on the republic.

But is it true, as Cuba’s opponents claim that the state undemocratic? That it’s repressive? Is the Communist Party not a true representative of the working-class majority and chosen by them? Is the PCC implementing policies contrary to the will and interests of the majority? Is its leadership preparing the ground for capitalist restoration and destruction of the remaining gains of the social revolution?

These are big questions. To answer any of them in a manner that is even half-way serious would require detailed concrete information and discussion about the actual situation in Cuba. That would have to include detail about the social situation; the level of political consciousness and outlook of different sections of the population; the economic situation; the degree of shortages of consumer goods, parts, machinery, oil, gas and so on; the degree of organisation or disorganisation and inefficiency of the economy and its different sectors as well as the country’s financial situation.

All these would need to be assessed in how they relate to the policy of United States imperialism – which is currently strangling the country by preventing ships from landing in Cuba, excluding Cuba from the international financial and payments systems, prohibiting Cuba from taking out insurance, preventing Cuba’s purchase of vital commodities like syringes and medicines, crushing Cuba’s tourism industry, banning flights and remittances, sanctioning its officials and so on. That the US is doing the same to Venezuela is of course hugely important for Cuba too.

This article series doesn’t take on any of that detail. What is outlined in article three is what Marxist theory has to say about the possibilities in Cuba. That is, even with the best, most skilful, most creative, most self-sacrificing and most dedicated possible leadership, party and class, i.e., even in this best possible scenario, what would then be possible in Cuba? And what would remain impossible?

No doubt Professor Callinicos remembers that Cuba is a small, poor island of 11 million people and that it lies close to the US coastline. It has few close allies and no rich ones. These facts are well known. What he seems to have forgotten is to consider these basic facts from a Marxist theoretical perspective. As Marx wrote in The Eighteenth Brumaire of Louis Bonaparte that,

In a global system of national states, Marx’s truism applies not only to individuals but also to states. The Cubans no doubt wish they were in a more favourable situation. We all wish that. The Cuban Revolution can only advance to the extent that objective conditions will allow. Refusal to accept this most elementary fact is ultimately a refusal to acknowledge the limitations placed on Third World societies in the imperialist system. Unwillingness to stain one’s own hands is what underlies ‘socialist’ hostility to the Cuban leadership.

RELATED CONTENT: Cuba’s Central Bank Regulates the use of Cryptocurrencies

SHOULD THE CUBAN REVOLUTION EXIST?
The anti-Cuba socialists, that don’t acknowledge, or insufficiently acknowledge, the objective limitations for Cuba see all of the weaknesses of the revolution, or most of them, as being caused by the subjective factor – ultimately by the Cuban leadership, the Communist Party of Cuba. This un-materialist outlook explains why Callinicos and his friends are automatically sympathetic to any opposition – even protests led by the right as in July. It also explains how the anti-Cuba socialists find themselves in the company of Pompeo, Suarez, Biden and even The Proud Boys and Trump who all lined up shoulder-to-shoulder with Callinicos against the Cuban Revolution in July.

Many of the signatories to the petition campaign against the Cuban government come from traditions that claim to vehemently reject Stalin’s theory. This makes their hostility to the Cuban leadership more difficult to justify. On the one hand they hold (arguably correctly) that “socialism in one country” is impossible. Yet on the other, when the realities in Cuba are shown to be anything short of socialist – whether in economics, politics or social life – these same critics blame not the objective situation but Cuban leadership.

When Cuban policy reflects that “socialism in one country” is indeed impossible – i.e. by introduction of limited market / capitalist reforms – these very reforms are pointed to as evidence the PCC is selling out or does not represent the interests of the Cuban workers.

So which is it? Is “socialism” possible in one (or two) poor besieged countries or not? And if not, what should the PCC do? Hand power back to the former Cuban capitalist class exiled in Miami and supported by the United States? If not give up the power, then what?

Of course it is possible that the PCC is making too many concessions to the market; or that these are creating more problems than they solve; that the degree of restrictions aimed at preventing counter-revolutionary sabotage go too far; that the degree of consciousness and organisation of the Cuban working class means Cuba does not need such defensive policy settings. That might be correct. It would be miraculous if there were no individual examples of such mistakes. But arguments about these issues have to be concrete. So far, no real arguments have even been made.

The position of Callinicos and friends amounts to a call to give up the power. Their letter and arguments favour the opposition movement supported by Miami and Washington. They do this under the guise of support for an imagined but non-existent left-wing opposition to the PCC. With the picture in their minds of the imaginary left opposition they desire, they condemn whatever action pro-government forces take to defeat the real opposition – whether these come from PCC militants, the police, Committees for Defence of the Revolution (CDRs) or other groups.

If the Cuban communists were to take advice from Emeritus Professor Callinicos the power that would replace them would not be one headed by University of Havana historian Frank García Hernández but that of Bacardi. The Cuban bourgeoisie in exile, backed by US imperialism, is the real force the PCC confronts.