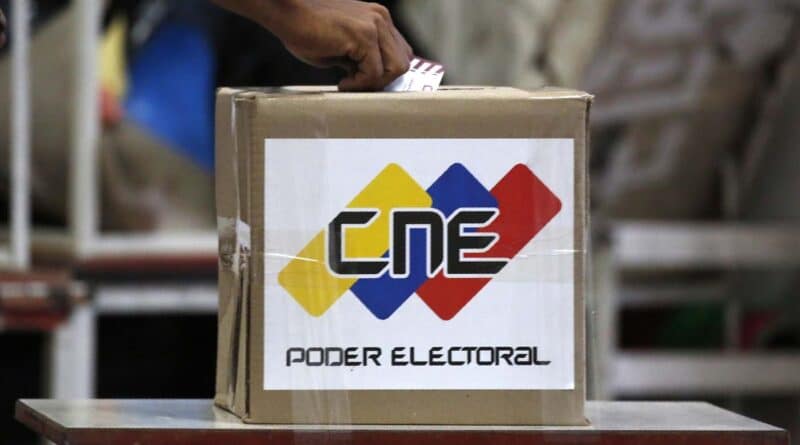 Caracas, May 15 (OrinocoTribune.com) – Almost six months before the mega regional elections in Venezuela scheduled for November, in which governors, mayors and city council members will be elected, a poll carried out by the firm Hinterlaces is showing positive trends in favor of the ruling PSUV and Chavismo, despite a high percentage of the electorate identifying themselves as politically non-aligned or non-affiliated to any party.

The regional elections are scheduled for Sunday, November 21, as announced last Thursday by the newly elected National Electoral Council (CNE) authorities. This new CNE board has received the recognition of many national political actors of the opposition, and even the European Union grudgingly acknowledged it as “a first step.” 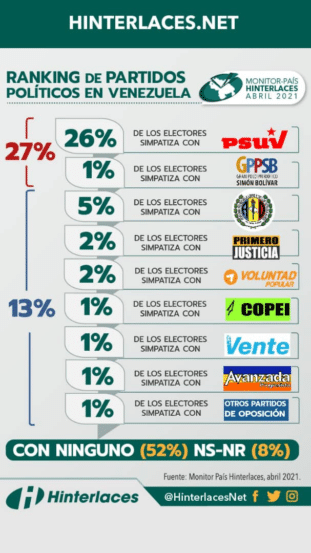 The United Socialist Party of Venezuela (PSUV) leads in the preference of the Venezuelan electorate, as evidenced in the recent Monitor País Hinterlaces 2021 survey, which was carried out between April 14 and 25. According to this survey, PSUV obtained 26% of the preferences in the ranking of political parties in Venezuela, while the alliance Great Patriotic Simón Bolívar Pole reached 1%.

Among the opposition parties, the best ranked was Acción Democrática (AD) with around 5%, followed by Primero Justicia and Voluntad Popular, each with 2% approval, while COPEI, Vente Venezuela, Avanzada Progresista and others each got the approval of 1% of the electorate.

In total, only 13% of those who participated in the survey stated that they identified with some of the right wing parties.

However, 52% of the participants said they did not sympathize with any party, while 8% responded “don’t know / no answer.”

In this same poll, 36% identified themselves as Chavista, while 17% identified as supporters of the opposition.

The study was carried out between April 14 and 25 of this year throughout the country, with 15% of those surveyed from strata A, B and C and 85% from strata D and E, with a margin of error of 3%.

The responses revealed the following:

• 30% define themselves as Chavista and support the administration of President Nicolás Maduro.
• 6% recognize themselves as Chavista, but affirm that they do not support Maduro. With this data, the sum total of people who accompany Chavismo is about 36%, even after 21 years of administration.
• In the opposition sphere, 9% of those surveyed aligned themselves with this group, although they affirmed that they do not support Juan Guaidó, while another 8% are opposition sympathizers and support Guaidó.
• 46% of the population does not identify with either of the two tendencies, that is, they do not consider themselves as either a Chavista or as an opposition sympathizer.
• 1% replied do not know or did not answer the question.

The political landscape in Venezuela has been getting reshaped in recent days even among the most extreme right anti-Chavismo, including former deputy Guaidó presenting a negotiation approach which is different from everything he proposed in the past.