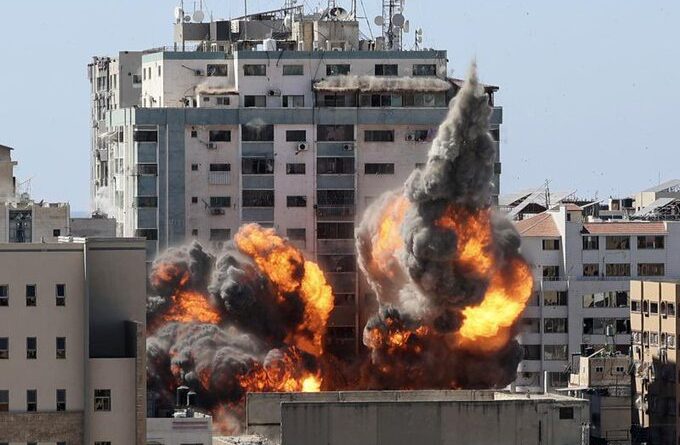 Diosdado Cabello, Venezuelan National Assembly deputy, posted two images on his Twitter account, showing the completely empty building of the newspaper El Nacional, in Caracas, “without workers or equipment,” and there were even some offices given on rent to other companies.

This came just a few hours after the notice by poster delivered to the owners of the newspaper this Friday afternoon, informing of the decision of the Supreme Court of Justice (TSJ) to proceed with an executive embargo of the main headquarters of the national daily, resulting from a defamation trial initiated by Cabello against the news outlet.

One of the photographs posted by the parliamentarian shows a completely desolate and dismantled newsroom. “The newspaper was bankrupted by its owners years ago,” he wrote. Indeed, the printed version of the newspaper has not been in circulation for about three years. This contradicts those who claim that the judicial seizure measure brings to an end the active life of an important media outlet in Venezuela.

Local media also highlighted that the executive embargo will only cover part of the $13 million reparation to Cabello, as ruled earlier by the Venezuelan Supreme Court. Diosdado Cabello has announced that he will give this space for an alternative media school.

RELATED CONTENT: The Israel Narrative is Crumbling Because of Phone Cameras and the Internet

I keep reporting: the newspaper El Nacional was bankrupted by its owners years ago, in the seized building there are no workers or equipment, everything was in total neglect and deterioration, offices rented to other companies, See where the newsroom was. Nosotros Venceremos! https://t.co/9SmhZqQyJo

The highest court of the land ordered the embargo after the refusal of the owners of El Nacional to pay Cabello a fine of $13 million, to compensate moral damages caused by defamation and injury.

Freedom of expression or freedom to defame and injure anyone?
The information on the embargo, ordered by the judiciary, generated a stir among those who call themselves defenders of freedom of expression and speak of “dictatorship” in Venezuela, all of them of course in the extreme right or in the US government; however, they conveniently omit that the newspaper in question committed crimes according to Venezuelan law. The outlet republished a report from the Spanish newspaper ABC, in which Diosdado Cabello was accused—without proof—of having ties to narco-trafficking gangs. Cabello sued in court and ultimately won the case.

Cabello has said several times what he would do with the compensation money. “If Miguel Henrique and his partners pay that in cash, all that money, except a small part that will be used to build a school for children with special needs in Upata, I will donate the rest to buy free vaccines for the people of Venezuela.”

On the other hand, if the owners decide not to pay, and if the TSJ decides to confiscate the headquarters of El Nacional in Caracas, “I will immediately sign an agreement to give this building for establishing the headquarters of the University of Communications,” Cabello announced, in keeping with an old promise.

Attack on press freedom?
While the judicial embargo order was being executed in Caracas, Israeli military forces—financed, armed and assisted by the US government—bombed to the ground the offices of Al Jazeera and Associated Press (AP) in Gaza, located in a building where foreign correspondents and journalist worked, with an advance notification of only one hour.

In this regard Jorge Arreaza, Venezuelan minister for foreign affairs, tweeted a video of the Israeli bombing, and wrote: “This is indeed a cunning and brutal attack on freedom of expression, not the #FakeNews of a seizure of an abandoned building, according to a court sentence. What do the defenders of press freedom say about this with their crocodile tears?”

This was in response to a tweet by Julie Chung, acting assistant secretary for the western hemisphere of US State Department, covering almost live the seizure of the El Nacional building, but not mentioning anything about the atrocity against international media in Gaza, carried out by Israel.

The raid on @NacionalWeb’s facilities is not against a building or property, but against freedom of the press. This responsibility for this violation falls directly on the regime. There cannot be free and fair elections in Venezuela without freedom of speech. https://t.co/BbFirkMR6E

This deafening silence over Israeli atrocities in Palestine and outrage over a Venezuelan judicial order providing legal protection to Deputy Diosdado Cabello, accused of drug trafficking without a shred of evidence by the irresponsible “journalism” of El Nacional, is clear evidence of the double standards of the US administration, letting the “allied” countries get away with committing the most atrocious crimes while condemning anything and everything in the countries that have chosen an independent path.

Featured image: An international media building, from which Al Jazeera and AP operated in Gaza, destroyed by Israeli bombardment. The only possible reason behind the bombing is the recent rather unexpected and sudden fair coverage from the Qatari news outlet about the atrocities of Israel against Palestinians. A ball of fire erupts from the Jala Tower as it is destroyed in an Israeli air strike. Picture: Mahmud Hams/AFP