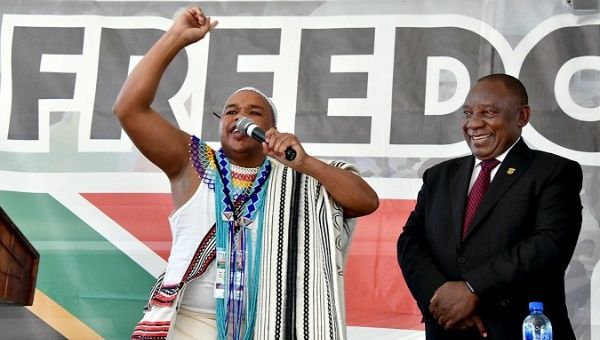 Freedom Day commemorates the millions of South Africans who made history electing Nelson Mandela during the country’s first democratic polls held in 1994.

South Africa is celebrating the 25th anniversary of its first democratic elections in which the victory of Nelson Mandela banished the apartheid’s racial segregation and served to found a new country, recalled President Cyril Ramaphosa during an official ceremony in Makhanda.

“On this day, 25 years ago, we, as South Africans, founded a new country, a country defined by principles of equality, unity, non-racism and non-sexism,” Ramaphosa said, commenting that “each of us has printed in memory what we were doing on April 27 [1994], when we won our freedom, the euphoria of seeing 20 million of South Africans, of all races, patiently waiting at polling stations to vote.”

On Saturday, the president paid tribute to the anti-apartheid struggle heroes, from Robert Sobukwe and Albertina Sisulu to Mandela. He said that thanks to their sacrifices South Africans have won their freedom.

“Under the apartheid rule, black South Africans were reduced to servitude in the land of their ancestors (…) The apartheid’s great tragedy was the great division that it inflicted on us,” Ramaphosa said.

He also recalled that racial segregation was imposed “brutally” to separate South Africans in all aspects of life, from schools to public transportation, and marriage and relationships. Ramaphosa recalled that segregations divided where people could live in cities. This condemned the black majority to live “cramped in ghettos” with poor education. They were “malnutritioned” and more exposed to “diseases” than the privileged white class.

27 April 1994: Nelson Mandela casts his vote in the first South African elections held without the discrimination of voters on grounds of race. It was the first time Mandela had voted in his life.

Ramaphosa also asked to reflect on the “great achievements” conquered in this quarter-century of democracy, but acknowledged that the country still has a long way to go.

“We can not be a nation of free people when so many people still live in poverty. … Without enough food, without an appropriate roof, without access to quality sanitation,” stressed the head of state.

He also acknowledged that the country continues to be profoundly “unequal” and that the corrupt “steal” many resources that should serve to alleviate the situation of the disadvantaged, most of whom are still black South Africans.

Former president Jacob Zuma (2009-2018) and a long list of other high-ranking South African officials have been under investigation in recent month by an national anti-corruption commission for being linked to a widespread embezzlement scandal that has infiltrated the government and the ruling African National Congress party. “It’s systemic in that entire systems have been subverted to promote corruption,” said David Lewis, the executive director of South Africa’s Corruption Watch.

The 1994 elections were the first multiracial elections in the history of South Africa, which had lived under an apartheid regime since 1948.

“Being black is not a matter of pigmentation – being black is a reflection of a mental attitude.” – Steve Biko. Wishing everyone a splendid Freedom Day! pic.twitter.com/5pzQi8wShQ

Apartheid in the county was a political and social system based on skin color and discrimination. Although racial segregation had been used for centuries in colonized African territories, the Africaners’ apartheid policy was strict and more systematic than any other form of discrimination implemented by white ruling elites. Due to that policy, the people of South Africa were forced to live apart from each other until the 1994 constitution abolished segregation.

In that year, Mandela won the presidency with 63 percent support. His term was based on values such as reconciliation and unity and he initiated the South African democratic era.

This year’s “Freedom Day” celebration falls in the middle of the political campaign for the May 8 elections. Ramaphosa remains as favorite to win the Presidency.