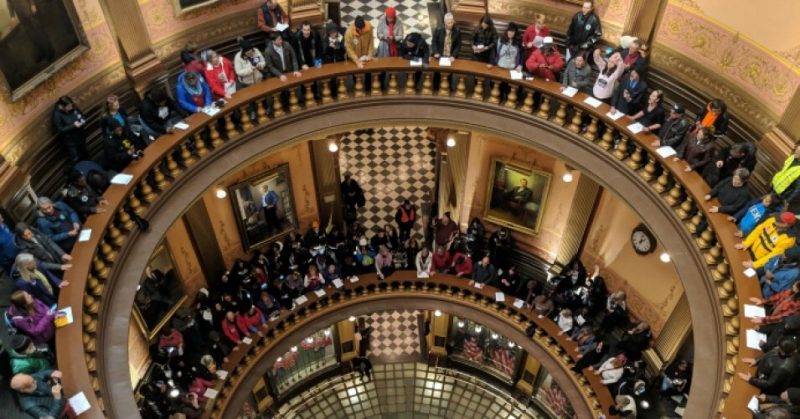 “We spoke loud and clear in November, and the sore loser Republicans are now shamelessly passing bill after bill to trample on the people and protect their ‘power.'”

As Michigan Republicans move ahead with a raft of legislation that would dramatically weaken the authority of the state’s newly elected Democratic governor, attorney general, and secretary of state, hundreds of outraged protestors flooded the capitol building in Lansing on Wednesday to denounce the GOP’s anti-democratic power grab.

“The people, united, will never be defeated!” demonstrators chanted as they condemned the Republican bills, which closely mirror “outrageous” measures that sailed through the Wisconsin legislature last month despite a wave of grassroots opposition.

As Common Dreams reported, Michigan’s Republican-controlled legislature has already used the lame-duck session to gut two voter-demanded initiatives that would have hiked the state’s minimum wage and required employers to provide workers with paid sick leave.

Now, much like Republicans in Wisconsin, the Michigan GOP is looking to strip authority from Democratic governor-elect Gretchen Whitmer and transfer significant power over the state’s legal affairs from the attorney general to the Republican legislature.

Michigan’s outgoing Republican Gov. Rick Snyder has not said whether he will sign all the bills that reach his desk. Confronted by his angry constituents on Wednesday, Snyder stayed in his office and shut the door.

The Michigan GOP’s sweeping bills, which have been likened to an attempted coup, have sparked widespread outrage, with Wednesday’s planned demonstrations making up just part of the broader grassroots campaign against the Republican power grab.

“Michigan Republicans are sick,” Rep.-elect Rashida Tlaib (D-Mich.) declared on Twitter last week. “We spoke loud and clear in November, sweeping Democrats into every statewide office, passing critical ballot initiatives, and the sore loser Republicans are now shamelessly passing bill after bill to trample on the people and protect their ‘power.'”

The Detroit Free Press has compiled the most egregious measures the GOP is looking to ram through before the end of the year. The list includes bills that would shift oversight of campaign finance law away from the Secretary of State to a “bipartisan commission” and allow the state legislature to intervene in legal matters normally handled by the governor or attorney general.