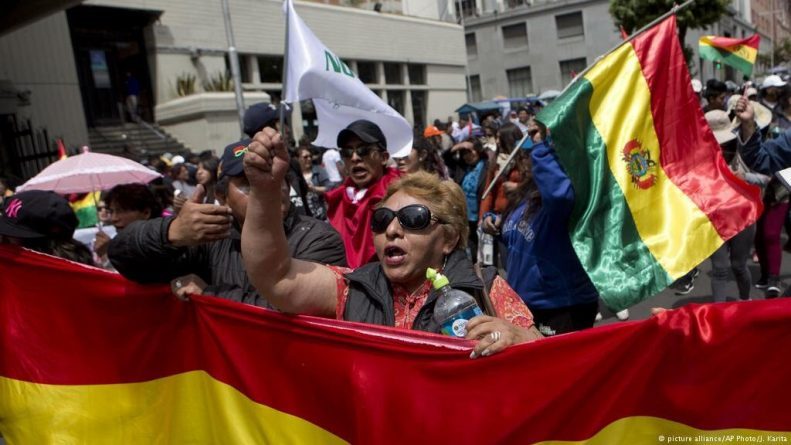 Anti-government protesters set fire to Bolivia’s Electoral Court in the department of Santa Cruz Tuesday night. The three-story building was destroyed by the flames. Protesters also looted and destroyed a state tax office and telecommunications building.

The arson took place after a march by students of the University Gabriel Rene Moreno, who reject the candidacy of President Evo Morales and Vice President Alvaro Garcia Linera, who are seeking a third term in the 2019 elections. Some refer to a possible 2020-2025 presidential term as Morales’ fourth; they are including the three years of his first presidency, prior to the approval of a new constitution and the foundation of the Plurinational State of Bolivia.

Opposition groups behind the protest denied their involvement in the arson attack and argued that their protests were infiltrated by thugs.

In the video you can hear a man celebrating the arson attack, saying “we built the homeland today.” The video was shared from the Twitter account “Bolivia Said No.”

Earlier this month the electoral court ruled Morales was eligible to run for re-election. Opposition groups claim the 2016 referendum on term limits, in which a majority of Bolivians rejected a possible 2019 run for Morales, should have barred Morales from running.

However, Bolivia’s Constitutional Court later ruled that term limits were a violation of political rights.

Violence in Bolivia, in the context of upcoming national elections, claimed a person’s life last week. Opposition groups have vowed to continue protests unless Morales reverses his decision to run.

According to local sources, twenty students were detained by the police, which dispersed protesters to make way for firefighters.

Jose Luis Quiroga, vice minister of the interior, lamented the events in a press conference. “We want to lament the vandalic attitudes by opposition politicians who today have revealed their true colors, they’ve shown what they were planning, what they wanted to do.

Morales, Bolivia’s first Indigenous president and a former coca grower and union leader, has presided over Bolivia since 2006. Since then, the Andean country has witnessed steady economic growth.