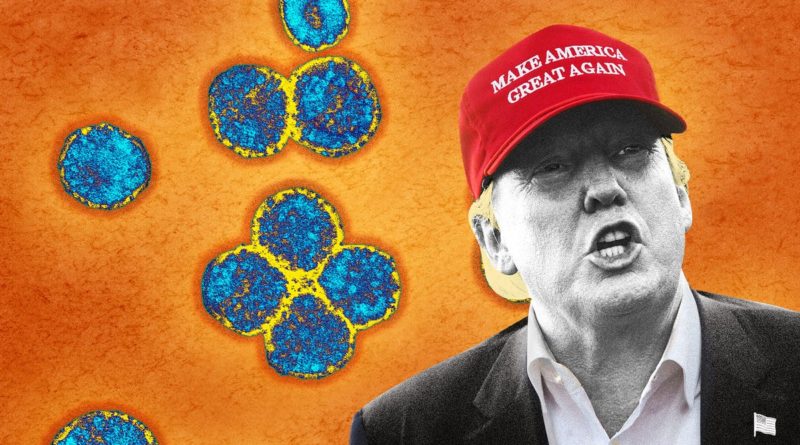 In hospitals in New York, California and Florida, where Covid-19 cases have skyrocketed, health workers have little in the way of personal protection, let alone diagnostic kits or sufficient ventilators to meet the demand for care. This is the country whose president has been minimizing the threat and lethality of the disease for weeks.

This is important, because despite its wealth and scientific and technical development, the United States has commercialized health care services to such an extent that it no longer has, properly speaking, a true public health system, as Mexico, Argentina, Costa Rica, Venezuela, or Cuba do in their different realities. In the first two countries, now greatly empowered by anti-neoliberal governments.

But Trump seemed to feel very confident about the superpower’s ability to deal with any health emergency, or so many of his tweets from this period indicated. He may not remember the tragedy of Hurricane Katrina in New Orleans and may not want to remember the one caused by Hurricane Maria in Puerto Rico, that happened during his administration and that he neglected except for some rolls of toilet paper.

RELATED CONTENT: Trump’s Plan to go After Venezuela in the Midst of the Pandemic Will Fail

In any case, these are some of his posts on Twitter that reveals a lot. January 22: “Everything will be fine. We have everything under control.” January 30: “We’ve got it all under control.” February 7: “When the weather is warmer, let’s hope the virus gets weaker and eventually disappears.” February 24: “The coronavirus is very much under control in the United States. I think the stock market is starting to look good.” February 25: “You can ask about the coronavirus, which is perfectly under control in our country. A few people have it. We are very close to getting a vaccine.” February 26 (one month ago): “Thanks to everything we’ve done, the risk to the American people is still very low. The 15 confirmed cases so far are going to drop to close to zero. Soon there will be five people and it could be one or two in a very short time.” February 28. “It’s going to disappear (the coronavirus). One day it will be like a miracle and it will be gone.” March 12: “It’s going to disappear… thanks to what I did and what the administration did with China.We have only 32 dead.”

Four days later, however, the tycoon seemed to be aware of the serious threat posed by the pandemic and solemnly announced the cancellation of all flights from Europe for a month, while the White House coronavirus task force, headed by Vice President Mike Pence, tweeted that social gatherings “of more than 10 people” should be avoided. Not without foundation, the cause of this sudden awareness was the result of the new task force getting a report from the reputed Imperial College of London that predicted up to 2.2 million deaths in the United States, unless drastic measures were taken.

RELATED CONTENT: Upside Down World: Now the US Says That Coronavirus in Venezuela Endangers the Region

Perhaps calculating the fall elections, the narrative that so obsesses Trump, made him change his quasi-denialist stance on the disease. At that time, there were 120,000 infected people in the world. It’s been a little over five weeks. Today, in the United States alone, the number of confirmed sick people has reached 104,400, with 1,690 deaths, while on a global scale there are 586,330 infected people confirmed by test, according to the World Health Organization. These numbers change dramatically by the day.

It is clear that Trump is not interested in the fate of the more than 320 million Americans, because in the last few days, after his supposed “awakening”, he turned to denial. He resents the quarantine, of which he has said that “the cure may be worse than the disease”, “our country is not designed to close”, and that it would be great if people were back at work by Easter. It is enough according to Trump, “to wash your hands more often” and “not to shake hands with others”.

In short, Trump has calculated, and there is much evidence that he has been encouraged to do so by Wall Street leaders, that the economy (theirs, not the people’s) can be damaged – and also his re-election – if the measures of social distancing continue.

However, as I finish writing these lines, the news has arrived that the city government of Washington, that is, the District of Columbia – which is not the same as the federal government – has decided to close all non-essential businesses and urges citizens to stay home from now until April 24. A month! Much longer than until Easter! So the dates for Washington will be the same as Cuba and Venezuela, countries that Trump is blocking mercilessly in the midst of the pandemic. The unscrupuolous Trump, obsessed with his own story, has just delivered to the billionaires the greatest “rescue” in contemporary history. A giant theft from the taxpayers.