Army generals appearing on television to demand the resignation and arrest of an elected civilian head of state seems like a textbook example of a coup. And yet that is certainly not how corporate media are presenting the weekend’s events in Bolivia.

The New York Times (11/10/19) did not hide its approval at events, presenting Morales as a power-hungry despot who had finally “lost his grip on power,” claiming he was “besieged by protests” and “abandoned by allies” like the security services. His authoritarian tendencies, the news article claimed, “worried critics and many supporters for years,” and allowed one source to claim that his overthrow marked “the end of tyranny” for Bolivia. With an apparent nod to balance, it did note that Morales “admitted no wrongdoing” and claimed he was a “victim of a coup.” By that point, however, the well had been thoroughly poisoned.

CNN (11/10/19) dismissed the results of the recent election, where Bolivia gave Morales another term in office, as beset with “accusations of election fraud,” presenting them as a farce where “Morales declared himself the winner.” Time’s report (11/10/19) presented the catalyst for his “resignation” as “protests” and “fraud allegations,” rather than being forced at gunpoint by the military. Meanwhile, CBS News (11/10/19) did not even include the word “allegations,” its headline reading, “Bolivian President Evo Morales Resigns After Election Fraud and Protests.”

Delegitimizing foreign elections where the “wrong” person wins, of course, is a favorite pastime of corporate media (FAIR.org, 5/23/18). There is a great deal of uncritical acceptance of the Organization of American States’ (OAS) opinions on elections, including in coverage of Bolivia’s October vote (e.g., BBC, 11/10/19; Vox, 11/10/19; Voice of America, 11/10/19), despite the lack of evidence to back up its assertions. No mainstream outlet warned its readers that the OAS is a Cold War organization, explicitly set up to halt the spread of leftist governments. In 1962, for example, it passed an official resolution claiming that the Cuban government was “incompatible with the principles and objectives of the inter-American system.” Furthermore, the organization is bankrolled by the US government; indeed, in justifying its continued funding, US AID argued that the OAS is a crucial tool in “promot[ing] US interests in the Western hemisphere by countering the influence of anti-US countries” like Bolivia. 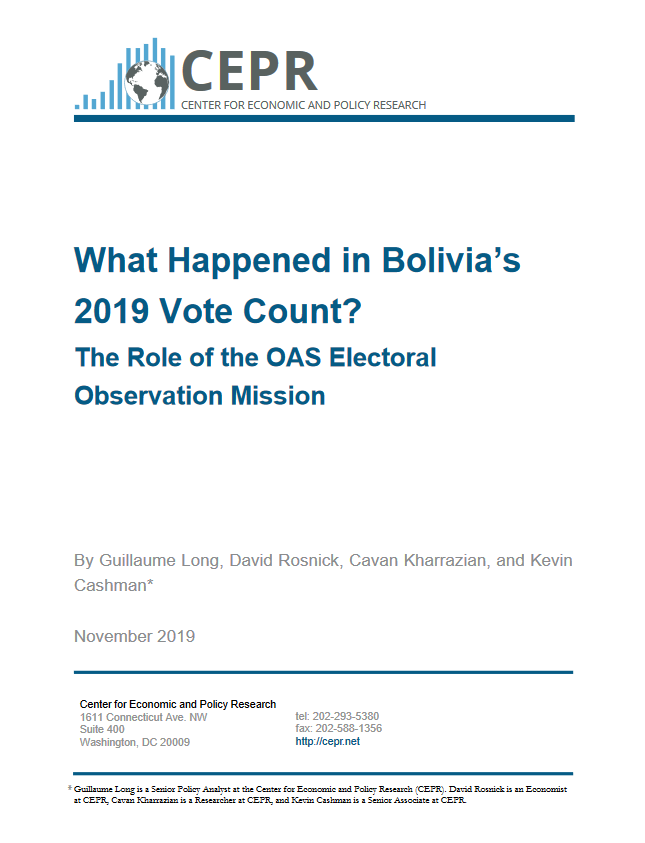 In contrast, there was no coverage at all in US corporate media of the detailed new report from the independent Washington-based think tank CEPR, which claimed that the election results were “consistent” with the win totals announced. There was also scant mention of the kidnapping and torture of elected officials, the ransacking of Morales’ house, the burning of public buildings and of the indigenous Wiphala flag, all of which were widely shared on social media and would have suggested a very different interpretation of events.

Words have power. And framing an event is a powerful method of conveying legitimacy and suggesting action. “Coups,” almost by definition, cannot be supported, while “protests” generally should be. Chilean President Sebastian Piñera, a conservative US-backed billionaire, has literally declared war on over a million people demonstrating against his rule. Corporate media, however, have framed that uprising not as a protest, but rather a “riot” (e.g., NBC News, 10/20/19; Reuters, 11/9/19; Toronto Sun, 11/9/19). In fact, Reuters (11/8/19) described the events as Piñera responding to “vandals” and “looters.” Who would possibly oppose that?

Morales was the first indigenous president in his majority indigenous nation—one that has been ruled by a white European elite since the days of the conquistadors. While in office, his Movement Towards Socialism party has managed to reduce poverty by 42% and extreme poverty by 60%, cut unemployment in half and conduct a number of impressive public works programs. Morales saw himself as part of a decolonizing wave across Latin America, rejecting neoliberalism and nationalizing the country’s key resources, spending the proceeds on health, education and affordable food for the population.

His policies drew the great ire of the US government, Western corporations and the corporate press, who function as the ideological shock troops against leftist governments in Latin America. In the case of Venezuela, Western journalists unironically call themselves “the resistance” to the government, and describe it as their No. 1 goal to “get rid of Maduro,” all the while presenting themselves as neutral and unbiased actors.

The media message from the Bolivia case is clear: A coup is not a coup if we like the outcome.