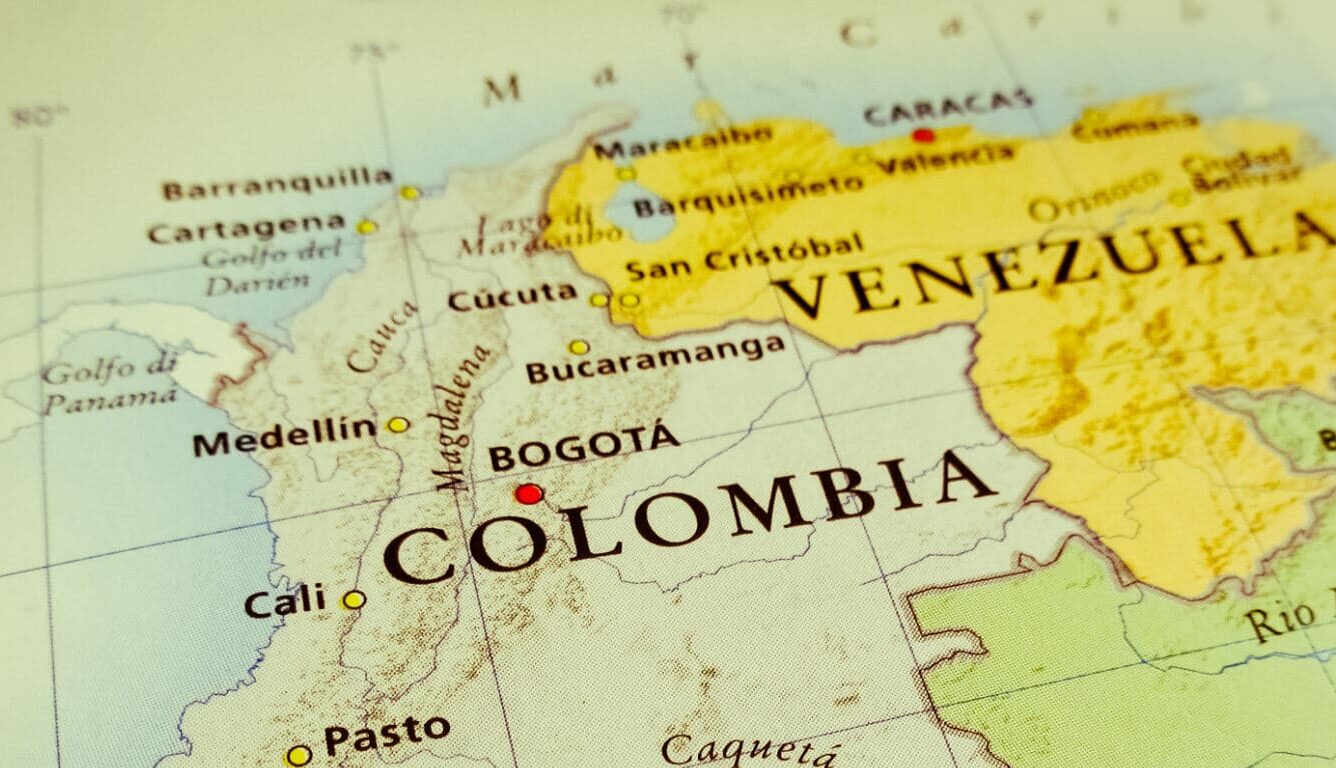 In South America an event is taking place that is seriously changing the political situation throughout the continent. Venezuela and Colombia have been making progress in recent weeks in normalizing their diplomatic relations.

On June 24, the candidate of the Historic Pact of Colombia, Gustavo Petro, officially became president-elect of the country. Among the political decisions that Petro promised to implement is the official reestablishment of diplomatic ties with the constitutional government of Venezuela, a link that was broken when Colombia, under former President Iván Duque, recognized the fake government of Juan Guaidó, a plan devised by Washington, and helped organize an invasion attempt, disguised as a “humanitarian intervention,” through the Colombia-Venezuela border in 2019. Consequently, President Nicolás Maduro of Venezuela announced the end of relations with Colombia.

After a lapse of three years, the relationship between the two countries has taken a new direction. Let’s examine some aspects that are already being worked on for mutual benefit.

Leyva read out the joint statement from both parties after the meeting: “The foreign ministers of the two countries expressed their willingness to promote a work agenda starting on August 7 to gradually normalize the relationship between the two countries through the appointment of ambassadors and other diplomats and consular officials.” The two sides also agreed to review issues of interest to the two countries, so as to consolidate friendship and cooperation, and work to ensure border security and peace, he said.

Faría added that both parties discussed the gradual reopening of borders and cooperation in trade, “as well as the reestablishment of relations based on respect, which is what we are working for.”

Normalization of border issues and other aspects of national security
On June 22, President Maduro had a telephone conversation with President Petro, who at the time was president-elect of Colombia. In addition to congratulating Petro once again for the electoral victory, the Venezuelan president discussed with him some issues of binational interest, mainly about the reopening and normalization of the border and border crossings. This aspect is extremely important, not only because of the positive projections it will have in the binational economy, but also for the security of the border regions of the two countries, for their prosperity and guarantee of peace.

In the last two decades, criminal groups have been encouraged by the US and Colombian governments to turn the Colombia-Venezuela border region into a territory of chaos, so that drug traffickers could take complete control of transport routes, and also that mafias of illegal extraction of resources such as gasoline could have free passage in that area, as well as to facilitate terrorist and destabilization operations against the Venezuelan government.

The situation escalated to such a point that the military defense agencies in Venezuela had to intervene with greater intensity since 2020, to neutralize the TANCOLs (the name by which Venezuela has called Colombian drug-trafficking armed terrorists). The most critical clashes occurred during March and April of last year, in the border area between Apure (Venezuela) and Arauca (Colombia).

Until now, the Venezuelan security agencies had not been able to coordinate efforts with their Colombian counterparts to tackle this problem. On August 9, Venezuelan Defense Minister Vladimir Padrino López announced that President Maduro had entrusted him with the task of establishing contact with the Colombian Ministry of Defense to reestablish military relations, which would be aimed at ensuring that the Colombian defense system maintains at least a basic coordination with Venezuelan authorities and act against the criminal and terrorist organizations that continue to operate in the border areas.

According to Petro, the Colombian Armed Forces will have some new roles: “We will build irrigation districts with the Army, we will build houses for peasants and roads in the localities with the soldiers of the country. Army, society and production can unite in a new indestructible social ethic.”

The change of political vision in the executive power does not necessarily mean a transformation of the military structures, but it does open the doors to other possibilities, which however small they may seem, mean important opportunities for Venezuela’s national security.

Economy and connectivity: upcoming developments
More than 200 business-owners from Venezuela and Colombia are meeting in Cúcuta, as part of the Border Agreement Forum, an initiative that was proposed to address the reestablishment of binational economic relations.

The activity was organized by the Interunion Committee of Norte de Santander, Fedecámaras Táchira and the Chamber of Venezuela-Colombia Economic Integration (CAVECOL), in order to discuss the opening of trade between Venezuela and Colombia and the joint identification of cooperation opportunities. Representatives of the Maduro government and the Petro government are expected to participate in the forum.

RELATED CONTENT: Colombia’s First Leftist President Will Bring Historic Change, if the US Lets Him

“We think that the space will serve for debate, for the exchange of opinions and to be able to identify complementarities at once,” said the president of CAVECOL, Luis Alberto Russián. “Opportunities to do business, opportunities to strengthen and rebuild binational value chains that are very important for the communities of Venezuela, Colombia and fundamentally for the border region… we really have very good expectations.”

Another expectation in the developing binational relations is the resumption of flights. In this regard, the president of the Venezuelan Association of Airlines (ALAV), Humberto Figuera, stated that in “a few weeks” flights between Colombia and Venezuela may be resumed.

Figuera added that if this happens soon, which seems like a step in line with the normalization of land traffic, there are four Colombian airlines that are awaiting authorization from the National Institute of Civil Aeronautics (INAC) of Venezuela to operate on the Colombia-Venezuela route: Avianca, Wingo, Latam, and Ultra.

Reactions and proposals from the governments of Venezuela and Colombia
The president of the Venezuelan National Assembly (AN), Jorge Rodríguez, spoke on Tuesday, August 16, about the reestablishment of relations between the parliaments of Venezuela and Colombia. He reported that he had communicated with Colombian Senators Roy Barreras and Gloria Flórez, and they had agreed to advance towards the rebuilding of the diplomatic and economic relations of the two countries.

He added that the AN decided “to work with the Foreign Ministry of the Bolivarian Republic of Venezuela and with the Minister of Foreign Affairs of the Republic of Colombia, in order to incorporate our schedule into the work plan that is already being discussed between the two countries.”

The parliamentary rapprochement plan includes the convening of the foreign policy commissions of the nations and special commissions of parliamentarians from the border areas to hold meetings on both sides of the border. The link between the two parliaments is also being coordinated and it is planned to give impetus to dialogue through five or six border axes.

Jorge Rodríguez also announced that Colombia will be requested for an investigation to determine those responsible for the attacks on the headquarters of the Venezuelan embassy in Colombia and the Venezuelan consulate in Bogotá.

Colombia is also studying the possibility of resuming imports of Venezuelan gas.

One of the Petro government’s plans is energy transition that involves the termination of two pilot fracking projects in the department of Santander. In April, a judge had revoked the environmental license of the projects until the communities in the area were consulted.

Delivering on the promise of energy transition without sacrificing energy security can be challenging. Therefore, the newly appointed minister of Mines and Energy of Colombia, Irene Vélez, said that in the event that gas reserves were not sufficient, connections could be made with other countries, and she specifically referred to Venezuela in this regard.

“We have gas reserves for seven to eight years. If we needed to fill our energy matrix, we could make the gas transport connection with Venezuela,” Vélez said in an interview with Blu Radio on August 12.

In order for all these to deliver mutual benefits to Venezuela and Colombia, the diplomatic aspect must first be consolidated, with the understanding that the contact groups that are being formed to seek a way out of the current situation continue to show progress. The offenses committed by the uribista governments against Venezuela in the last two decades have left a long list of tasks to be resolved, and there are no guarantees that external actors, specifically the White House, will allow them to unfold normally.

The road to stability in binational relations is full of adversity, but at least the march has begun.