Flyer inviting to the webinar "Summit of the 'Americas" vs. CELAC: Whither the Monroe Doctrine @200?" Photo: IMG.

Caracas, August 19, 2022 (OrinocoTribune.com)—The International Manifesto Group (IMG) has organized a webinar and invites you to attend next Sunday, August 28 at 11am (EST). The event will present remarkable international speakers and it is called “Summit of the ‘Americas’ vs. CELAC: Whither the Monroe Doctrine @ 200?”

In the invitation the IMG provides a background for the discussion and explains that “ever since US President James Monroe adumbrated his infamous Doctrine in 1823, claiming the Western Hemisphere as the US’s ‘sphere of influence,’ subordinated to US interests, the US has assailed the region’s autonomy, recently with much assistance from Canada. Barring upsets like the Cuban and Nicaraguan revolutions, the US appeared to be winning until the 21st century. However, the ‘pink tide’ inspired by indomitable Cuba that has since surged has tilted the balance of power against the US and Canada.”

RELATED CONTENT: Khaled Barakat in Conversation with Orinoco Tribune: Either We Rebuild the PLO or We Establish Another Palestinian National Front That Gets Its Legitimacy From the People 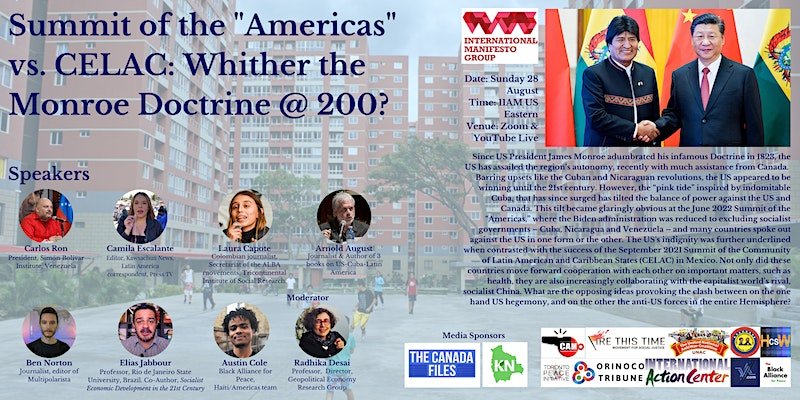 IMG continues, adding that “this tilt became glaringly obvious at the June 2022 Summit of the ‘Americas,’ where the Biden administration was reduced to excluding socialist governments—Cuba, Nicaragua and Venezuela—and many countries spoke out against the US in one form or another. The US’s indignity was further underlined when contrasted with the success of the September 2021 Summit of the Community of Latin American and Caribbean States (CELAC) in Mexico, which involved all countries south of the Rio Grande. Not only did these countries move toward cooperation with each other on important matters, such as healthcare, they are also increasingly collaborating with the capitalist world’s rival, socialist China, as exemplified by the virtual speech given by Chinese President Xi Jinping to the Mexico Summit. China’s economic attractions and respect for the region’s sovereignty and autonomy cannot be matched by the US and Canada.

The panel will discuss the opposing ideas provoking the clash between US hegemony and anti-US forces throughout the hemisphere.

• Carlos Ron is Vice Minister for Foreign Affairs for North America and currently serves as President of the Simon Bolivar Institute for Peace and Solidarity Among Peoples.

• Camila Escalante is the woman behind Kawsachun News, a media outlet based in Bolivia, and also known for her correspondent work reporting around Latin America.

• Laura Capote is a Colombian social activist and journalist living in Argentina since 2013, and is a member of the Colombian Critical Thinking Group of the Institute of Latin American and Caribbean Studies at the University of Buenos Aires.

• Arnold August is a Montreal-based author of 3 books on US-Cuba-Latin America. As an award-winning journalist, he publishes in English, Spanish & French on several continents, collaborates with teleSur TV, Cuban TV, Press TV Iran and Socialist China.

• Benjamin Norton is an independent journalist and editor of the anti-imperialist news outlet Multipolarista. He is currently based in Latin America.

• Elias Jabbour is Associate Professor of Theory and Policy of Economic Planning at Rio de Janeiro State University, and one of the most prestigious Latin American researchers on Chinese socialism, and a member of the Central Committee of Communist Party of Brazil.

• Austin Cole is a member of the Black Alliance for Peace’s Haiti/Americas team. He currently studies as a graduate student at MIT.

• Moderator: Radhika Desai is a Professor at the Department of Political Studies, and Director, Geopolitical Economy Research Group, University of Manitoba, Winnipeg, Canada.