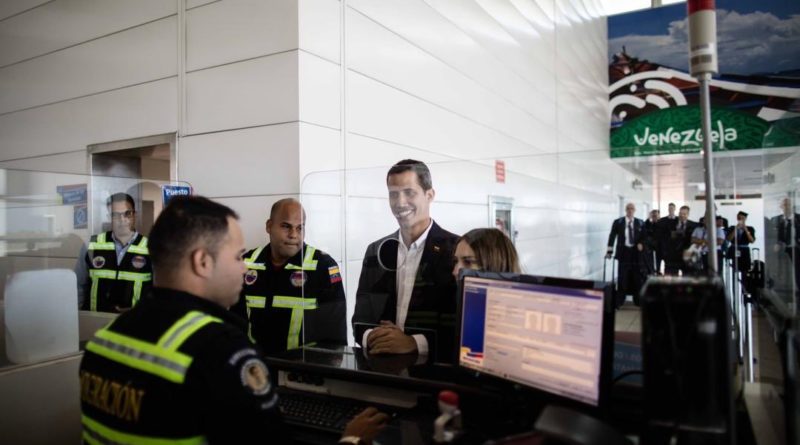 On January 29, 2019, the Attorney General of the Republic, Tarek William Saab, petitioned the Supreme Court of Justice for authorization to initiate a criminal investigation against the citizen Juan Guaidó. He did so when he considered that the acts carried out by this deputy were related to the occurrence of “violent acts in the country, pronouncements of foreign governments and the freezing of assets of the Republic, which would imply the commission of serious crimes that threaten the constitutional order”. His request was accompanied by the demand for precautionary measures that would allow the investigation to advance and settle the situation in a possible criminal proceeding.

On the same date, the Supreme Court of Justice communicated in the person of its President , that the collegiate body had adopted decision No. 1 in plenary session, with a presentation by Justice Juan José Mendoza Jover, through which he declared himself competent, agreed to authorize a preliminary investigation against Guaidó, as well as issued measures prohibiting him from leaving the country without authorization until the investigation is completed; of prohibition to alienate and encumber the property under his name; and the blocking and freeze of bank accounts and / or any other financial instrument in Venezuelan territory.

On February 22, despite the court order that expressly prevented him from leaving the country without authorization, Guaidó appeared in Cúcuta as part of the concert that served as a facade to the alleged violation of national sovereignty that had been announced on February 23.  Since then, he undertook a Latin American tour within the framework of which he announced that he would return to Caracas on March 4.

In the last hours, the international media had fixed their attention on this event that we can classify as a kind of second round of February 23, because they had promised that this would be the occasion where the world would see the dictatorial character of the Maduro government, which they had  alerted would draw international consequences if some act was taken against the opponent.

RELATED CONTENT: Guaidó Returned and was Not Detained-Analyst: “Threats of his Masters Denote Fear and Cowardice”

Thus, despite the fact that during an interview with journalist Patricia Janiot, Abrams indicated that they would not take military action if he was imprisoned, the Inter-American Commission on Human Rights before the announcement of the return of the self-proclaimed interim, dictated on February 28, 2019, Resolution 1 / 2019 that contains the precautionary measure No. 70-19 in protection of the interests of Guaido.

Now, these facts, read from the provisions of Venezuelan law, force us to draw some inferences. The first is to observe that this is another act of non-recognition from the National Assembly and its majority caucus, of the authority of the Venezuelan Judicial Branch. We should remember that we have observed this situation since the month of July 2016, the National Assembly decided to deviate from the normal relationship with the rest of the Public Powers.

The second is the individual non-recognition of Guaidó of the judicial order. It is important that we bear in mind that, according to our Constitution and international treaties, few elements are more important than the equality before the law of all citizens. In this way we will see that everyone, regardless of whether we are civil servants or not, must respect the law and the actions of the courts.

Thus, if in general we all have the right to be presumed innocent and the obligation to comply with the orders of the courts, in the case of criminal trials, irreverence or contumacy has particularly burdensome consequences. It is through these judgments that the most sensitive interests of society are secured and this is the face of the greater strength that the State has, within the framework of the law.

Based on this, we have to observe that the condition of deputy does not grant impunity or irresponsibility. Only immunity that requires that, in case of being appointed, the highest authorities should authorize the judicial procedure. Which, as we refer to at the beginning of this note, has already occurred. Likewise, when a Court of the Republic grants a precautionary measure, it does so because it observes the elements of previous and necessary presence together so that they may proceed.

The manner in which they are applied, in accordance with the provisions of the Organic Code of Criminal Procedure and the Constitution, obeys the logic of affirming the principle of trial in freedom, seeking that whatever is done until there is a conviction, be the least overwhelmingly possible.

Now, in the present case, what we have is a citizen facing criminal proceedings, who received a clear and express order, with which he did not comply. This is a common assumption in the criminal sphere, and that is why the same Organic Code of Criminal Procedure in the chapter referring to the Precautionary Measures Substituting, indicates what the judicial authority should do when faced with this scenario.

In this case, when a citizen has failed to comply with a prohibition to leave the country, what corresponds to the Public Ministry is to request the judicial authority to revoke the injunction for non-compliance, or that the judicial authority proceed to do so ex officio, tending logically to use a measure of greater weight against the citizen who did not comply with the order received.

It is important to note that there is no arrest warrant against Guaidó, or at least it has not been made public, that is the judicial instrument that allows a public authority to arrest a citizen, and the acts that he has exercised have not been qualified in the context of flagrancy to allow an exception to this principle.

In the same way, we must observe that the dictation of a judicial decision on what happened is not a simple automatism, because in the Venezuelan scheme in this phase, the judicial authority has as a function to tend to balance, facilitate the procedures that allow investigation -in everything that helps prove guilt or innocence – as well as being the guarantor of the rights of the accused. That is why, in these matters, the decision of the authorities must wait and avoid stating a position that, without having all the elements in consideration, draws a scenario, because what is expected is a just decision, reasoned and weighted in accordance with the law.