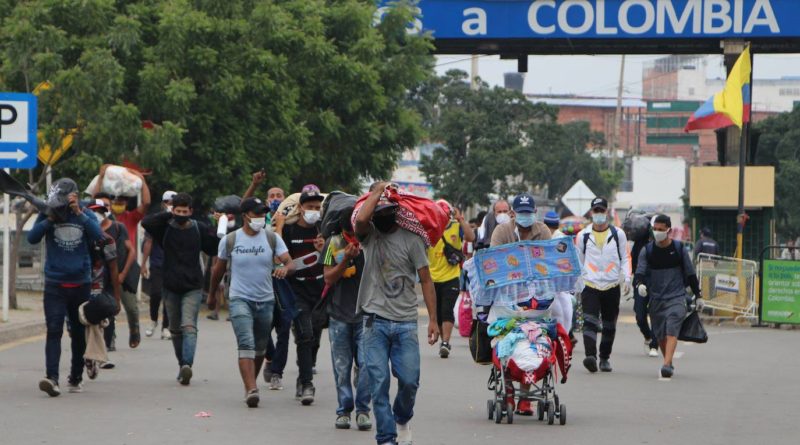 Recently new images of Venezuelan “walkers” were seen on social networks. This time, there was not as much media coverage as there was in 2018 and 2019, the big media did not appear this time.

These are Venezuelans who again walked through Colombian territory but this time back to their country of origin. This new displacement for economic reasons placed a new heavy burden on their shoulders.

By applying quarantine measures in Colombia to contain the advance of Covid-19, the restriction of many economic activities is ordered. Unlike other countries, including Venezuela, Colombia does not order the suspension of payment of leases or rentals. This left many Venezuelans living in Colombia in a very complex situation, who, without depending on wages but on daily and informal activities, had trouble paying rent.

The case replicated in Peru, given that the Venezuelan population was excluded from a bonus that the government granted to alleviate the quarantine. As in Colombia, without an order to stop rent collection, the result is that Venezuelan migrants are being thrown onto the streets. Due to the closing of the borders with Ecuador, they are stranded in Peru, wandering from one place to another.

Within days, images of Venezuelans being evicted in Bogotá and other Colombian cities began to circulate on social media. In the Colombian capital, Venezuelans closed the Transmilenio bus system to call for attention. The mayor of Bogotá declared that the migrants were not her responsibility and endorsed the problem over to the Iván Duque government, who did not respond either.

Nonetheless, these Venezuelans in a vulnerable economic situation chose to walk back to Venezuela, on a journey that could take up to seven days. Now they bring the weight of stigma, profiling, and xenophobia. They are poor migrants in a strange country.

The press that made them so visible when they left Venezuela is no longer there to narrate their tragedy.

The walking scenery of a stage set

All the times international media talked about those who migrated outside Venezuela, the internal economic war, the forms of monetary speculation, the business boycott and the hardening of living conditions in which the Venezuelan government had little to do, were always omitted.

Every time it was omitted that the economic blockade against Venezuela fell on the population, creating new deprivations that had an impact on large social strata.

However, the images of 2018 and 2019 of a degraded, abused and injured population, walking from one country to another, were extremely useful for, paradoxically, tightening the economic blockade that accelerated that situation. That was a prop artifact, a walking scenery to recreate what they always called “the Venezuelan humanitarian crisis”, which was never such, not for the reasons they said it was, at least.

It is then that Washington decides to orchestrate the farce. Venezuela had to have an intervention, its government structure had to be dismembered, and one had to be imposed by force, so that “aid” could arrive which, instead of “humanitarian”, ended up being “imaginary”. Well such a thing never happened. That was never the plan.

In February 2019, there was a pitched battle on the international bridges between Venezuela and Colombia that was not intended to provide aid, but rather to double the command lines of Venezuela, when the same US government and its artificial “president” in Venezuela, Juan Guaidó gave the “order” to the Bolivarian National Armed Forces (FANB) to denounce their commands and break with their institutionality.

The issue never consisted of delivering aid. All this was a staging to provoke an institutional break in the military structure of Venezuela.

In those days, Cúcuta was boiling with airplanes, money, politicians and entertainment figures. The Live Aid Venezuela concert had media attention and a narrative that practically placed the entire Venezuelan population in the situation of starving children in Africa in the 1980s, completely out of step with the real dimension of the Venezuelan economic crisis.

In those days, the truth had no space or relevance, the important thing was to sell the image of “aid” and, of course, legitimize the overthrow of Maduro.

The international “humanitarian” bureaucracy had governments, NGOs financed by USAID and the OAS issuing numbers of migrants, many of them in clear disagreement with the migration authorities of their own countries.

Something smelled bad. There was no point in exaggerating the figure of Venezuelan migration. They made out Venezuelans and Colombians as migrants who daily passed by thousands by international bridges, but they did not say that each day they returned to their point of origin. They spoke of the fact that some 30,000 Venezuelans left the country daily and that it was a trend for years, which was absurd mathematics, since Venezuela would lose more than 10 million citizens in a year if that were the situation. Something totally far from the truth.

The magnification was incomprehensible unless it had a political purpose. We all think that it was only a matter of establishing a false narrative about the Venezuelan situation to legitimize the siege of the country. But it was much more than that.

There was talk back then, that is, a year or less ago today, that during the transit of Venezuelans to other countries, as well as their stay and economic migration, they would have the financial support of international “aid”. That was what the aid was for, what was raised in Venezuela Live Aid, the million dollars given by Don Omar, what was donated by the United States, what was donated by other countries.

Simultaneously with the collection of “imaginary aid”, the Trump Administration froze and took Venezuelan assets abroad. CITGO Petroleum Corporation did in fact come under the control of representatives appointed “by Guaidó” but sectors affiliated with the US government have it in their hands. This was the case with another great Venezuelan asset, Monómeros, a petrochemical company, the most valuable outside of Venezuela after CITGO, but in Colombian territory.

While Guaidó was in charge of appointing artificial ambassadors in various countries, the embezzlement was cooked to an indeterminate number to this day of money stolen from the vaunted “aid”. In a matter of months, fraud allegations would erupt against Guaidó and his entourage of Venezuelan politicians abroad, for having swindled resources.

It was all a sham always.

After the outbreak of that corruption plot, Guaidó’s continuity was “inexplicable”, being a clear disruptor of Venezuelan politics through his “presidency” that has only “served” to steal. Artificially held in the limelight by Trump, his position is evident in a violent [regime] change plan for the Venezuelan government.

But it is more than that. Its parallel persistence in Venezuelan politics is also sustained by other factors outside of Venezuela, a political and pseudo-humanitarian scaffolding. Guaidó is a clearly instrumental piece for the flow of resources for the benefit of specific sectors of the opposition and their allies abroad, namely, figures such as Iván Duque and Luis Almagro.

At the end of 2019, Namita Biggins , spokeswoman for the US State Department, stated that during 2019, “the United States government has given more than 650 million dollars towards humanitarian assistance, not only within Venezuela but also to support 16 neighboring countries.”

In Venezuela, it is clear that this flow of resources does not exist and everything seems to indicate that neither does it exist abroad.

Everything points to the fact that the Venezuelan “humanitarian” issue is actually a method of attracting resources for the benefit of Venezuelan and foreign political operators who have played an active role in the plot against Venezuela.

It is a mechanism of dispossession of Venezuelan assets and a way of “bypassing” resources from the US bureaucracy and the paraphernalia of donations, a huge amount of money that has never been for the benefit of Venezuelans, neither inside nor outside the country.

The scam at the expense of Venezuelan migrants as a “piece” of the induced Venezuelan crisis, today increased by the blockade, is not only economic: it is also political.

When Venezuelans left their country, all the political narratives aimed to “sympathize” with them. But in just months, the narratives came to call them “hungry, ragged, and crooks.” In other words, when Venezuelans ceased to be useful for consummate economic embezzlement, they lost relevance and began to be treated as poor migrants “served” by right-wing governments.

Venezuelans were suddenly turned into scapegoats for structural problems that were already taking place in Peru, Colombia, and Ecuador, such as insecurity, economic informality, or their deficits in health and education services.

They incorporated them as an input for internal political propaganda: “Look at Venezuelans, we don’t want to be like Venezuela, vote for me,” said the regional right wingers.

In Peru, the Vizcarra government has instrumentalized Venezuelan migration to create huge smoke screens on crime and the “hunt” for “criminal” immigrants, all to distract the explosion pots of corruption around the Odebrecht case.

The Lenin Moreno government in Ecuador singled out Venezuelans as operators of the 2019 social protests, indifferently criminalizing them.

This exacerbated the forms of profiling, exposure and stigma. There was a mass psychological phenomenon that made the Venezuelan presence in Colombia seem like an “invasion” in a country of 48 million people.

Burdened by being singled out and rage, their latest misfortune was wandering the streets of Colombia, out in the open during the height of the most serious health crisis in the last 100 years. In a clear act of irresponsibility, the Colombian government turned thousands of Venezuelans into a traveling “health problem”.

At this point, there is no longer any talk about a “humanitarian aid” that might have served to pay the rents of Venezuelans in Colombia. If that money had served for them to have bread, it would also have been for them to have health in times of pandemic.

Neither a CITGO dollar nor a Monomeros peso has come to the rescue. None of that is relevant anymore. The economic and political swindle was consummated. Venezuelans were cheated even with great promises when they left their country. “Any country” was supposed to be in a better situation than Venezuela, and reality showed them that this was not true.

Under international human rights and migration law, any country that receives migrants, legal or not, is responsible for them and they must ensure their universal rights. The degradation of migrants makes it clear that for Colombia international law is a farce that only knows how to maneuver to “justify” injuries against Venezuela and its people.

What remains is the portrait of those who return home as prodigal children. The Venezuelan government receives them, medically evaluates them with tests to detect Covid-19 and they will reach their destination inside the country. More waves could come. Let us not doubt those who want to take advantage of the current circumstances to “get rid” of Venezuelans.