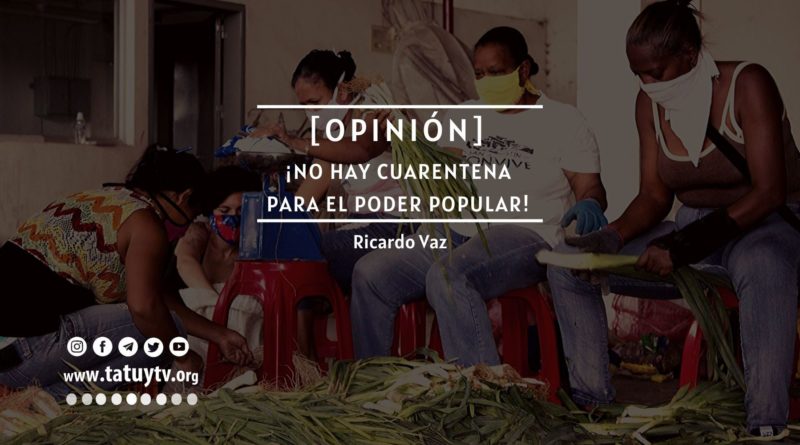 By Ricardo Vaz – April 4, 2020
If there is something that Venezuelan political organizations are dedicated to, it is to propose different future scenarios. With constant US pressure, imagining contexts of foreign invasions, coups, early elections, etc., is a natural exercise. Left – wing organizations try to describe the scenarios before thinking about what their performance should be in each one of them.
However, no one was prepared to face the coronavirus. While in these cases the revolutionary organizations locate themselves, and locate their enemy (s), this situation changes everything. It is an “invisible” enemy that cannot be fought on the streets, and less, collectively. Not only that, but there is a fear of being infected and (worse) infecting other people.
The recent months in Venezuela were of growth of popular struggles. The government, haunted by US sanctions, was still on the path of favoring foreign investment and granting more and more benefits to capital. In this sharpening of contradictions, projects such as the Unión Comunera emerged, which openly plans to build a political alternative to dispute the hegemony of Chavismo.
In this context, the pandemic and quarantine arrived. But contrary to the paralyzing instinct, the popular Chavista organizations are activated to build responses from below.

“Right now the issue of the pandemic overcomes everything,” Ana Marín told Tatuy TV. “We have the challenge of organizing ourselves in a situation like this, in addition to threats of invasion, interference and the North American blockade.”
Ana Marín is a spokesperson for the Comuna El Panal 2021 in the 23 de Enero neighborhood in Caracas, and a member of the Patriotic Force Alexis Vive (FPAV). The FPAV is one of the most politically advanced organizations in the country and the main engine of the commune. In the current pandemic crisis, its members have deployed to meet the most urgent needs of the inhabitants of the commune.
Questioned about the “secret” of the organization, Ana explained that it is a maturity and experience accumulated in the trajectory of recent years.
“About three years ago we understood the need to take on the entire productive chain,” she explained. “With all the experience here in the commune we could have a bakery, a sugar packer, a textile mill, but if we did not have the raw material we were sunk.”
As a consequence, in her words, “some of us from Caracas went to the mountains!” Ana said that [there] planting and animal husbandry experiences had many “difficulties and mistakes”, in addition to clashes with local powers that felt threatened. However, the experiences of primary production continue and have contributed to the growth of the collective in organizational and political terms at the national level.
The Comuna El Panal, and the different chapters of the FPAV in the country, are the main promoters of the nascent Unión Comunera. Ana insists that it is essential that the communes are articulated, but in parallel she asserts that a “leap” is necessary.

RELATED CONTENT: The United States Surpasses 11,000 Coronavirus Deaths Today Becoming a Major Focus of Infections Worldwide
“We have three lines of work that we call ‘seduction’, ‘industrialization’ and ‘proletarianization’ of the neighborhoods. It is necessary that the communes produce but with class content,” she said.
The communal spokesperson admitted that “the pandemic paralyzes things a little”, but said that the community logic must continue to be promoted. In the case of the El Panal Commune, the responses that were immediately put into practice were the consequence of previous and constant organizational work.
“We already had people with disabilities, with chronic diseases, who are more vulnerable. Through the textile company Las Abejitas del Panal we produce face masks, and we also had the dining rooms activated,” explained Ana.
The commune opened a dining room two years ago, and in recent times it has also taken over the dining rooms of different schools. At this juncture, and in alliance with other grassroots organizations, hundreds of meals are produced daily in schools for boys, girls, older adults, and the most vulnerable population of the “point and circle” (political organizational methodology) of each school.
Attention to children, explained Ana, has been another priority for the commune in the middle of the quarantine. Together with the teachers of the community, assignments have been made for the boys and girls to continue their educational activities. Educational games are also being prepared so that the little ones can better understand what is happening, and why they have to be locked up.
One concern that Ana pointed out has to do with the issue of treatment, since many parents see schools as “carajitos deposits” (kid’s storage) and are not used to having children around all day. In this sense, the educational brigades are alert to any child abuse.
“All of this is presented to us right now. We must call not only for solidarity but also for revolutionary creativity, ” she said in conclusion.

The Cooperativa Unidos San Agustín Convive ( CUSAC ), from the San Agustín neighborhood also in Caracas, is a more local, smaller and younger organization. But that is not why it has less determination and “revolutionary creativity.”
The cooperative, with about 30 members, has been advancing on different political, productive and training fronts. However, the most important activity of the cooperative is the organized days of fruit and vegetables consumption that are held every two weeks. Alternating between three nuclei of the neighborhood, this initiative is the product of the articulation with the Plan Pueblo a Pueblo.

RELATED CONTENT: Catastrophe in Venezuela? Psychological Warfare and Fake News in Times of Pandemic
Martha Lía Grajales , member of the Surgentes cooperative and human rights collective , spoke to Tatuy TV about the challenges involved in organizing a food distribution day in the current context.
“The day we had last Saturday (March 28) brought a series of challenges. Personal, individual challenges of being able to overcome fear, the worry that the possibility of contagion means. And also collective challenges to create a methodology that safeguards the life and integrity of the people who organize around the cooperative,” she explained.
The first change was that the purchase was made in advance. Each cooperative member could gather up to 5 relatives or friends interested in buying and taking responsibility for the payment and delivery of food. Likewise, the use of face masks and gloves, hand washing and the recommended distance were strictly observed.
On the other hand, the same food “combos” were sold for everyone. This had been the initial modality of the consumption fairs, but it was changed in the crisis when people with less resources stopped being able to access the complete combo.
“For the cooperative, as a benchmark for a new way of doing politics, this ability to reinvent ourselves to continue deepening the processes is essential,” said Martha.
Another important difference is that, in order to minimize the number of people involved, only the members of the cooperative participated in putting together the combos. (The members of more than 60 years of age were also protected by not participating). The work of unloading the food from the truck, weighing, separating, weighing the individual amounts and preparing the bags were in the hands of a few people, when normally all the people interested in buying participate in the different work commissions.
“But there were also things that were kept intact,” Martha insisted. “The spirit of building power from below, of generating solutions from the collective.”
The low cost of food was also kept intact. The combos were 9 kilos and cost 312,000 Bs (34,667 Bs / kilo), with the possibility of also purchasing a kilo of beans for 75,000 Bs. The significant savings compared to the market is due to the organizing effort of the peasant farmers from Pueblo to Pueblo and the direct link between the countryside and the city, without intermediaries.
Questioned about the role of popular power in the current situation, Martha Lía said that this is a “turning point”.
“There is a dispute between the logic of capital accumulation and the very reproduction of life. Our efforts should push towards a new rationality, a logic of greater justice in both economic and political and social terms ” she said.
In conclusion, she underlined the importance of demonstrating from concrete practice that solutions come from the construction of popular power from below.
“In the cooperative we try to reflect on what we are experiencing and how, from the power accumulated in recent years, we can respond to these challenges and difficulties, ratifying our socialist, feminist and decolonial horizon,” emphasized Martha.

The pandemic further exacerbated the contradictions of capitalism worldwide. In this complicated context, even more so in Venezuela, planning and the search for collective solutions are imperative. Popular Chavista organizations, such as the Patriotic Force Alexis Vive or the Cooperativa Unidos San Agustín Convive, have important challenges ahead in the coming months. But in the same way, they have already demonstrated over and over again their commitment to the Chávista project and the construction of socialism.
In this crisis, as in all others, only the people save the people.