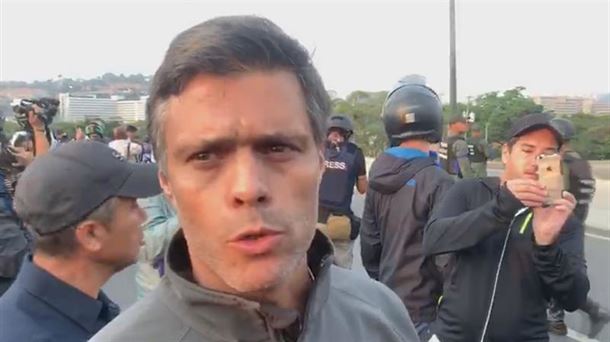 Leopoldo López has been a problem for Spanish diplomacy and describes the current state of the regime change operation.

The initial picture of the failed coup attempt in Venezuela on April 30 had the faces of Juan Guaidó and Leopoldo López as a story and prelude to a day that would be catastrophic.

The sun was barely breaking but both leaders were approaching sunset. Their insurrectionary plan had been advanced before the high possibility that at that time it was already unveiled to the Venezuelan authorities. They played on but hoped that sectors of the Bolivarian National Armed Forces (FANB) would support them.

The words of President Nicolás Maduro after the events were emphatic: “I put all the people and the FANB on alert! In the coming days I will show the evidence of who conspired, how they conspired and who betrayed. So the people will know who the traitors are and justice will do its part!” he exclaimed.

From sources like The New York Times, The Washington Post and the BBC, speculations arose about “what went wrong” in the attempt, agreeing that indeed within the FANB there were officers conspiring, not only giving as certain the sentences of the president Mature, but also alluding to the possibility that the dismantling of the coup was already under way from the very moment when the conspiracy plot was undertaken.

Guaidó and López went ahead, knowing that their blow was crumbling and that Guaidó would probably be captured.

The possibility of double agents acting in favor of the legitimate government is high, as well as the fact that the adventure undertaken by Guaidó and López was based on the aspiration that they would be accompanied in an “all or nothing” by military sectors in a marked operation by the absence of directionality, without cohesion and without clarity about who supported whom.

After all, the support did not appear. It is not known if those who actually counted were always with them, it is not known who remained hidden, or who held back.

Both leaders ended up in a lonely scene on a highway bridge, Defense Minister Vladimir Padrino described the attempt as “mediocre” and the next day, Elliott Abrams, an expert in coups and irregular wars in Central America, had a painful presentation admitting that those who had conspired against Maduro “had turned off their cell phones”.

Trump’s National Security Advisor, John Bolton, and Abrams himself, doing damage control, resorted to intrigue and accusations, as if. Padrino himself would depose Maduro at Washington’s request, plunging his conspiracy narrative into the hoax, the externalization of guilt and incongruent denials of the participation of that government in the operation.

Leopoldo López, who is undoubtedly Washington’s main asset in Caracas, was in the plot of this failed coup a letter played at the wrong time and with an instant exhaustion. He violated his house arrest, is now requested by the Venezuelan justice system and in these hours is a “guest” at the Spanish embassy in the country. Of Guaidó, it is only known that he is an “interim president” fugitive from Venezuelan justice.

LEOPOLDO LÓPEZ AS AN ARCHITECT AND ASPIRANT

It seems proven by the events of politics in Venezuela that the spasms of the Voluntad Popular (VP) party, the Lopez organization, have served to degrade the Venezuelan opposition through an irruption of its leaders and then its pouncing on political violence. attempted coup d’etat and the push of all antichavism towards shortcuts with no way out.

It is not an exaggeration to say it if we remember that during the years 2014 and 2017, as well as this 2019, since “the hard wing” of the Venezuelan opposition took the reins, the result ends up being catastrophic for all antichavism. The situation could not be less in 2019 when VP assumed the presidency of the Parliament and then proceeded to the manufacture of Juan Guaidó as a figure of a portable government.

However, Guaidó is not the element of importance in this plot. That’s really Leopoldo López, for the purposes of the Venezuelan internal front.

He has been Washington’s favorite for years to establish an interlocution and relations of obedience to that country’s strategic policy in his destitute agenda in Venezuela. He is undoubtedly an agent and operator determined to take power in Venezuela and in the last instances has served as manager in Caracas of the same Guaidó, who for purposes of this juncture and in the future is and will be a highly dispensable item.

From his situation of “guest” at the Spanish Embassy in Caracas, Lopez went to the press and said that for “three weeks” he was meeting at his house with “commanders, generals, police officers, to achieve the cessation of the usurpation.”

The collaboration in the coup of factors of the Venezuelan intelligence service (SEBIN), responsible for López’s custody, would have facilitated these meetings (or at this point, it is not known if they were tolerated to dismantle the operation). In any case, Lopez assumes the authorship of the conspiracy plot, stating that “they will not stop” and that “more movements will come in the military sector.

In theory, the scheme of Washington for Venezuela would go through the rupture of the Venezuelan government and the dismantling of its institutions through a transition created by means of the coup or the possibility of a military intervention. In the scenario of the forced displacement of Chavismo, the formation of a government would take place through “free elections”, for which Lopez would be an aspirant.

And that is why Lopez’s level of commitment to the execution of the dismantling of Chavismo in Venezuela happens not only because of his role as messenger, but also because of his deepest personal aspiration. A drift supported by his own ego and an absurd sense of “predestination” that germinated in the bowels of his status as the privileged son of the Venezuelan elite.

THE POLITICAL DRIFT OF LÓPEZ

The instantaneous wear and tear of López and Guaidó leaves the destitute agenda adrift against Chavismo and Venezuelan institutions and their execution from within.

The opposition is now without a political direction and even the leadership of the parliament is dismembered with the appearance of Edgar Zambrano in the Altamira Distributor, which now becomes an immense monument to the failure of anti-Chavismo. This suggests that the directionality of the conspiracy lies in its instrumentalization and execution from the United States now almost exclusively.

The destinies that will have the opposition support to the calls of the antichavismo, now that they are drastically exhausted and that today have their main convener a fugitive of justice are unspeakable.

In fact, the picture of Guaidó on the night of April 30, calling to the street and announcing the continuity of a classic military coup that was no longer credible, came with an image of José Antonio Páez on his table recalling the times of La Cosiata and the betrayal of Bolívar dissolving the Gran Colombia. The historical reproaches do not cease to surprise us, nor do they lack cynicism.

But the tragedy weighs more heavily on the shoulders of Leopoldo López. His drift started in Altamira and he was passing through Chacaito with a blow that he knew failed on his shoulders. Maybe at that time some of his contacts, as happened to Abrams, also did not answer the phone. He went to the Chilean Embassy, but there was another fugitive inhabitant there, Freddy Guevara, his former political operator. Absurdly he retires from there “for personal reasons” said the Chilean chancellor Roberto Ampuero.

Maybe at that time Lopez was a “hot potato” or an undesirable one. At that time, perhaps more than ever, the eviction that had taken place weeks before the headquarters of the US embassy in Caracas was opportune and Lopez had to go to the Spanish embassy, to become a state problem for that country, appealing to his Iberian nationality by descent.

A couple of days after the arrival of Lopez to that embassy, the government of that country declared that it was still “analyzing” the legal conditions of the case.

Something that is known, is absurd, because in that diplomatic corps there is full knowledge of the Vienna Convention and whether or not to grant an asylum can result from an instant decision. López declared himself a “guest” and has not applied for asylum. He has said that he will remain there for weeks until “the cessation of the usurpation” occurs. The joke tells itself.

The Spanish ambassador meets with the Venezuelan Foreign Minister Jorge Arreaza and although they declare that they do not contemplate giving Lopez to Venezuelan justice, they hope that “the situation does not affect the relations between both countries (let’s look at the detail that for that case there is no “usurpation”).

Foreign Minister Borrel affirmed on behalf of Madrid that Lopez’s political activities will be controlled and that “they will not allow their headquarters to be used for political activism.”

Disabled and unlikely to maneuver, the fate of the now “guest” Leopoldo López is unspeakable and closes a brief and thunderous chapter that resulted in the dismantling of the local gendarmerie of the US government in Venezuela.

The fate of this plot will not be decided in Caracas but in Washington, which is where it has always been orchestrated. A situation that reaffirms the position of uselessness and irrelevance of local antichavismo.

During Friday afternoon, three days after the attempt, after days of threats and boasts, Donald Trump declares he has talked with Vladimir Putin and makes a change of discourse regarding the issue of Venezuela.

“Prudence” with regard to military action appears as a key word but also reveals the distrust he has about his intelligence services and the unreliability of the information available to them regarding the recent events in Venezuela. Or at least that’s how it was leaked by the CNÑ network. Will John Bolton be fired from his post? We do not know.

The leadership of the Venezuelan opposition, characterized by its transversal mediocrity, with accumulated experience living as well-off professional politicians at the expense of the national economic elite for its perennial work of dismissing chavismo for more than 20 years, is likely to have also tricked the U.S.government itself.

In this way, the displacement they have had abroad in recent years can be measured in the midst of an internal dispute over who will officiate as the local White House spokesperson.

Probably promising “villas and castles”. Probably promising military commanders, boasting of capabilities they do not have and cackling a possibility of instantaneous, fleeting and effective blow, a situation that could have occurred in unison with their act of plundering the Venezuelan assets and accounts that the United States confiscated since January of this year. .

For Washington, the tragedy begins to be great because, despite its own capabilities, the development of the agenda against Venezuela will have (as it does today) an uncertain destiny if there are not the capacities of local factors to operate and instrumentalize their decisions.