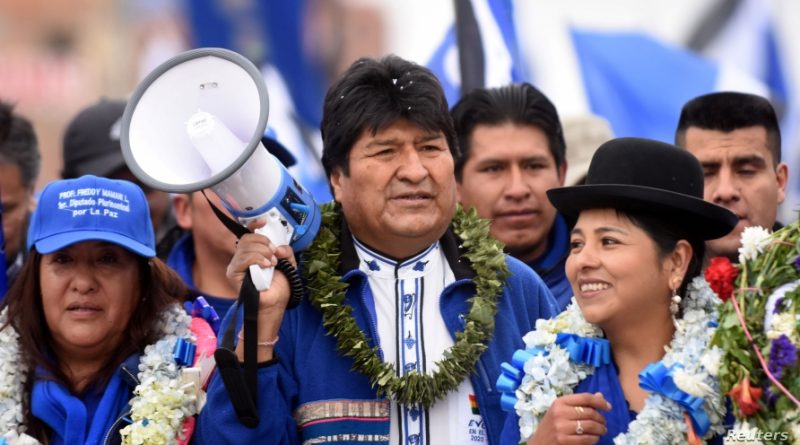 An offensive in two phases, to be developed before and after the October 20 elections in Bolivia, is part of the destabilization strategy that the opposition bloc is deploying against Evo Morales and the continuity of the Process of Change. It is entering the final two weeks until an election of great importance due to the effect it will have a week later in Argentina and Uruguay.

It was easy to understand that this harsh attack by the Bolivian right wing, backed by the United States and by Bolivian politicians who are on the run from justice, is part of the new general strategy of destabilization that has been developed against Evo Morales since February 21, 2016, when an unprecedented form of political-media conspiracy succeeded in preventing a referendum from approving the reform of article 168 of the Political Constitution of the State that would enable the indigenous leader for this year’s elections.

The result of that referendum was due in part because the U.S. Embassy exposed radio personality Carlos Valverde’s rumor about a supposed child of Morales being born out of wedlock giving excessive optimism to the opposition and made it ignore the real balance of power in the country that continued favorable in general terms to the President’s Process of Change. Convinced that Morales was weakened, in the two weeks following that electoral act, the requests for resignation of the president did not cease, although they were focused on small groups of opinion leaders with media coverage and political leaders with little representation.

The high-intensity debate over Evo Morales’ legitimacy after the February 21 referendum rose in tone in September 2017, when a group of Movement to Socialism (MAS) deputies and senators filed an Abstract Remedy of Unconstitutionality before the Plurinational Constitutional Court to enable Evo Morales to enter the 2019 elections, on the basis of preferential rights established in the CPE and the American Convention. On November 28 of that same year, a constitutional decision gave a favorable decision to the constitutional appeal.

The letter used by the government and the MAS, of four others at hand to achieve the same result (Evo’s resignation three months before the elections, call for two types of referendum and the call for a new Constituent Assembly), left the opposition confused and out of place for a few weeks, which only managed to return to the complaint as a method of opposition.

But then this opposition bloc (right-wing parties, the media, the Catholic hierarchy, some businessmen, civic leaders and citizen platforms) regrouped with a new escalation of its offensive.

Now there are three fronts from where the opposition carried out this new phase of the anti-Evo strategy: the international, the internal political-conspiracy and the national media.

At the international level, the opposition resorted to three types of actors: first, international organizations such as the Organization of American States (OAS) and the Inter-American Commission on Human Rights (IACHR). Neither of these were successful due to the legality of the constitutional decision that enabled Morales and that this confirmation has international precedence in the case of Oscar Arias, who was qualified to go to reelection after term limits expired in Costa Rica.

The second actor was the United States, through the State Department and the U.S. Senate, which, each one separately, issued declarations asking Morales to respect the result of February 21 and urging him not to run in the elections. Internally, however, the common vision of organizing and pointing a coordinated attack against Morales did not materialize because the right wing could never overcome its divisions and the competition between citizen platforms reproduced the same malaise. This fragmentation became evident even before the promulgation of the Law of Political Organizations (LOP) and it became even more pronounced as soon as the call for primary elections was launched for January of this year. As a result, eight opposition parties registered their candidates for the primaries.

Internally, the platform protests turned into violence against MAS militants or against the headquarters of the Supreme Electoral Tribunal in La Paz and Santa Cruz.

The third front is the media. Although there is nothing that can prove the existence of a coordination mechanism at the media level, it is clearly evident that opposition media and journalists, as well as columnists and analysts, coincided in hitting President Evo Morales with the issue of 21F, corruption and drug trafficking.

So where was the traditionally fragmented Bolivian opposition articulated?

The question is not difficult to answer. Only the United States – from inside and outside – has the capacity to gather “Moors and Christians” behind the goal of attacking Evo Morales. While great care has been taken by current US Chargé d’Affaires, Bruce Williamson, not to show his direct involvement, as it happened with Ambassador Philip Golberg in 2008, for which he was expelled for, Williamson has held meetings with opposition candidates Carlos Mesa, Samuel Doria Medina and Ruben Costas. Not to mention the arduous activity of U.S. and Bolivian officials working for that country.

But while this trend deepened, leaving the former vice-president Carlos Mesa as the least favorable candidate, a natural event came unexpectedly which affected the electoral numbers of Evo Morales and eventually drove him back a few points. The fires in Chiquitanía gave the opposition an effective way to sensitize sectors of the population and create the distorted image that Evo Morales is the biggest predator in all of Bolivia’s history.

As we have pointed out before, the opposition block takes advantage of the fires to generate events with conflict, such as those led by the Pro Santa Cruz Committee -which in its town hall meeting on October 4 threatened civil disobedience if Evo Morales triumphs as a result of alleged electoral fraud. Other special interest groups are also doing their parts to bring down Evo like The Medical Association, which opposes people’s access to health care, has been on strike for over 30 days. The civic groups of Potosí are seeking more royalties on the exploration of lithium and a sector of the indigenous people of the lowlands are marching towards La Paz to demand that the decree to expand the agricultural frontier be lifted – and by a sector of the coca growers of Los Yungas de La Paz, who continue to question the General Coca Law.

Calculated or not, the general strategy to destabilize Evo Morales has entered its final stretch and that offensive has two phases: before and after the October 20 elections.

In the run-up to the elections, the objective is to prevent Evo Morales from being re-elected in the first round on October 20 (since a second round would be much more difficult, if not impossible). Here there are three groups of actors with different motivations and tactical objectives.

The first group is a hard-line opposition, whose main leaders are outside the country (Carlos Sánchez Berzaín, Manfred Reyes Villa, Branko Marinkovic and others), who oppose Morales, but also the opposition candidates “because they are functional” to the government when they run in the elections. Although they do not say so, they are inclined to generate facts that would force the suspension of the elections.

The second group is made up of some activists, politicians and civic leaders led by Jorge Tuto Quiroga and Luis Fernando Camacho of the Pro Santa Cruz Committee who, although they are in favor of supporting Mesa before Ortiz, have as their main bet to work, inside and outside the country, to delegitimize the figure of Evo Morales before and after the elections. One of their letters, so far unsuccessful, is to present a letter to the Inter-American Court of Human Rights asking for an advisory opinion on whether or not indefinite re-election is a human right. In spite of their efforts and sensationalized announcements, neither Jair Bolsonaro nor Iván Duque have lent themselves to this project, due to internal problems in their countries.

The third group is the candidates who stand in the elections. This line of “putting gasoline” into the social conflicts developed by unions and civic groups against Morales, in order to benefit them electorally, pits them against each other and weakens the effect they seek.

But, as we say above, this offensive has a second half with variants. One in case there is a second round and the other in case Evo Morales is elected for a fourth term.

If there is a second round, it is not easy for the opposition either. Oscar Ortiz has already announced that he would not vote for Morales or Mesa, since these two have projects that have fundamental disagreements.

In the event that Morales wins in the second round, it is evident that this government will have a very difficult time having the chambers of deputies and senators with a majority in favor of the MAS and social movements in the streets to defend the conquests of these 13 years.

In the scenario of Evo Morales being reelected for a fourth term, one of the resolutions of the city council of Santa Cruz is already a preview of what the leftist government will have to face: the national and international attack mounted on the idea of electoral fraud. This implies the idea the opposition has that Bolivia applies almost the same recipe deployed against Nicolas Maduro of Venezuela and Daniel Ortega of Nicaragua, who in addition to criticizing them with the stigma of “dictators” are considered illegitimate governments and therefore deserving that the Inter-American Democratic Charter be materialized with all its rigor against them.