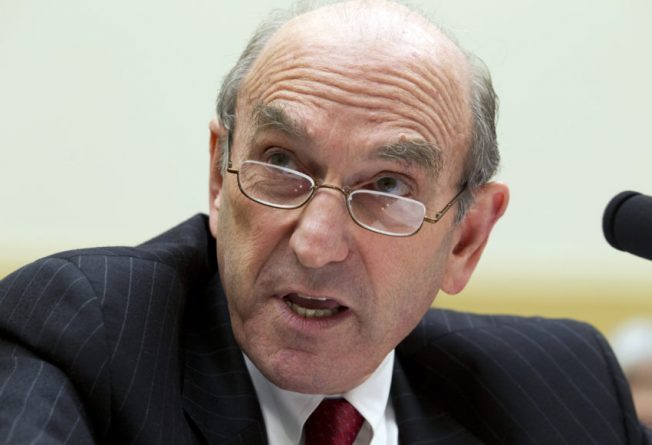 No one actually thinks the same Donald Trump who kicked off his run for the White House by calling Mexicans rapists, and subsequently, as president, left Puerto Rico for dead after Hurricane Maria, cares at all about the Venezuelan poor. No one actually thinks the murderers row of Cold Warriors—led by two of the most extreme right-wingers in American politics, Venezuela envoy Elliott Abrams and national security adviser John Bolton—cares at all about the starving people in Venezuela or their plight. No one reading this, be they right, left, center, libertarian or communist, actually buys the prevailing narrative that the U.S. is sending “aid” to Venezuela as a humanitarian gesture.

So why is everyone pretending otherwise?

There are a number of reasons why these superficial narratives take hold, but I’d like to speculate on two of them.

First, the crisis in Venezuela is very real and very daunting. Without litigating who’s responsible for what, whether U.S.-led sanctions and economic sabotage are more to blame or the economic policies of Nicolás Maduro, one simple fact is true: The status quo is untenable. Perhaps, then, the instinct to “do something” is understandable. But as with previous crises, both organic and contrived, what that “something” is remains unclear. Liberals—as they did in the build-up to the invasions of Iraq and Libya—are easily pressured into this “do something” posture.

The way these things work, however, is that this vague moral directive often involves a combination of CIA and U.S. military intervention. During the Syrian conflict, for example, it meant U.S.- and NATO-led bombings of Syrian forces and a tacit declaration of war under the guise of “no-fly zones.” What’s never considered is a reduction or cessation of U.S. involvement, be it CIA weapons running, wide-scale bombing campaigns, or the imposition of sanctions—all of which prolong a given conflict or simply make it more violent.

Because a core tenet of American liberalism is to avoid assigning blame—at worst, its adherents believe, the U.S. is run by a bunch of bumbling do-gooders—what the American empire is actually doing to fuel a conflict cannot be debated, much less censured. And so the notion that we could simply cease our crippling sanctions, which even the pro-opposition Economist acknowledges are designed to “starve” the Venezuelan people, is simply not an option.

The current “something” in Venezuela we’re all compelled to “do” is ensure the arrival of a humanitarian aid convoy. The fact that the bulk of the international aid community has either distanced itself from this PR stunt or outright opposes it has been widely ignored by the mainstream media. One exception is NPR, which recently reported this inconvenient truth:

The U.S. effort to distribute tons of food and medicine to needy Venezuelans is more than just a humanitarian mission. The operation is also designed to foment regime change in Venezuela — which is why much of the international aid community wants nothing to do with it. Humanitarian operations are supposed to be neutral.

That’s why the International Committee of the Red Cross, United Nations agencies and other relief organizations have refused to collaborate with the U.S. and its allies in the Venezuelan opposition who are trying to force President Nicolás Maduro from power.

“Humanitarian action needs to be independent of political, military or any other objectives,” Stéphane Dujarric, the U.N. spokesman, told a press briefing last week in New York. “The needs of the people should lead in terms of when and how humanitarian assistance is used.”

In fact, no neutral observer of international aid thinks Bolton and Abrams’ convoy is anything but a mechanism to foment civil war and regime change. We know this because high-level administration officials and their allies on the right keep telling us that’s the case. As the New York Post recently proclaimed, “U.S. delivers aid to town bordering Venezuela to undermine President Nicolas Maduro.”

Donald Trump delivered a long and rambling speech in Miami last week and didn’t once mention human rights, instead railing against the evils of socialism. Former acting FBI director Andrew McCabe reflects in his new book that Trump has openly fantasized about overthrowing Maduro, something he has discussed in White House meetings. “That’s the country we should be going to war with,” Trump said, according to McCabe. “They have all that oil, and they’re right on our back door.”

Determined to maintain U.S. hegemony and control over the world’s largest-known oil reserves, the Trump officials plotting this latest coup aren’t even bothering to take its humanitarian pretext seriously. Why, then, are purportedly centrist and liberal media outlets?

A second matter to consider is how our government has weaponized the public’s sense of morality. Since the Spanish-American War, the U.S. has used humanitarian concerns as a shield against criticism or skepticism, and it has more or less worked every time. It’s why “aid” organizations like Air America used food transports to ship guns to anti-Communists in Indochina in the 1960s and ’70s. (Weapons were code-named “hard rice.”) And it’s why Elliott Abrams—the current quarterback of this latest affair in Venezuela—used humanitarian aid shipments to smuggle weapons to the Nicaragua’s Contras in the ’80s. Ultimately, these shipments allow for massive military buildups, without anyone in the media or Congress asking too many questions. After all, what kind of monster is opposed to helping starving people?

It’s impossible to know if the current shipments to Venezuela are being used to transport weapons, although Venezuelan authorities say they have intercepted American arms shipments. But given the history of the U.S. (to say nothing of Abrams’), and the fact that the Trump administration is openly calling for Maduro’s ouster while amassing forces along the Colombian border, it’s not exactly a long shot. Still, our political press dismisses the possibility as tin-foil hat stuff, at least in part because mocking wacky Latin American “conspiracy theories” is a mark of one’s seriousness in foreign policy circles.

Unlike a lot of U.S. regime change activities, reports indicate that this latest stunt was exceptionally rushed and slapdash. The Wall Street Journal paints a picture of a U.S. operation its architects believed would work in a day or two:

“The people who devised it in Caracas and sold it here [in Washington], sold it with the promise that if Guaidó made a move and [South American countries] and the U.S. came in behind, the military would flip and Maduro would go,” said a former senior U.S. official. “They thought it was a 24-hour operation.”

Because the large-scale military defections expected never took place (as they almost never do), the U.S. has had to resort to its Plan B for promoting conflict and galvanizing the Venezuelan opposition: On Sat., Feb. 23, President of the National Assembly Juan Guaidó will carry out a “humanitarian avalanche” at the Venezuelan border with Colombia and Brazil that, when one reads the fine print, sounds a lot like a U.S.-led invasion. Billionaire Richard Branson is reportedly organizing a “humanitarian aid” concert the night before. But we know this is a fig leaf, and we know this because those running this operation say so again and again. Bolton himself has speculated that Maduro could end up in a “beach area like Guantanamo.”

Despite all the evidence before them, MSNBC, CNN and countless other networks and publications across the ideological spectrum refuse to frame this humanitarian gambit as an act of hostility. Instead, knowing what they know and who they are covering, they have largely portrayed Trump, Bolton and Abrams as champions of the Venezuelan people.

It goes without saying that hundreds of thousands are suffering in Venezuela, and the instinct to alleviate that suffering is a healthy one. But a craven marketing stunt by far-right Cold Warriors—without any buy-in from actual aid organizations—cannot be taken at face value.

Just as the U.S. military has made calls to high-ranking Venezuelan officials, I am writing directly to the editors, television producers and reporters of our most prominent news outlets. I’m asking you to defect and come to the side of the patently obvious. Unlike the Pentagon, I can’t bribe you or promise you amnesty, but I can appeal to your basic sense of integrity and intellectual honesty: At best, you are helping provide cover for a campaign designed to starve the Venezuelan people; at worst, you are enabling a military conflict that will drag on for years.

One does not need to hold any normative opinions about the fate of Venezuela to be able to identify a naked PR campaign when they see one. Journalists with blue checkmarks on Twitter must say so before this gets any further out of hand.