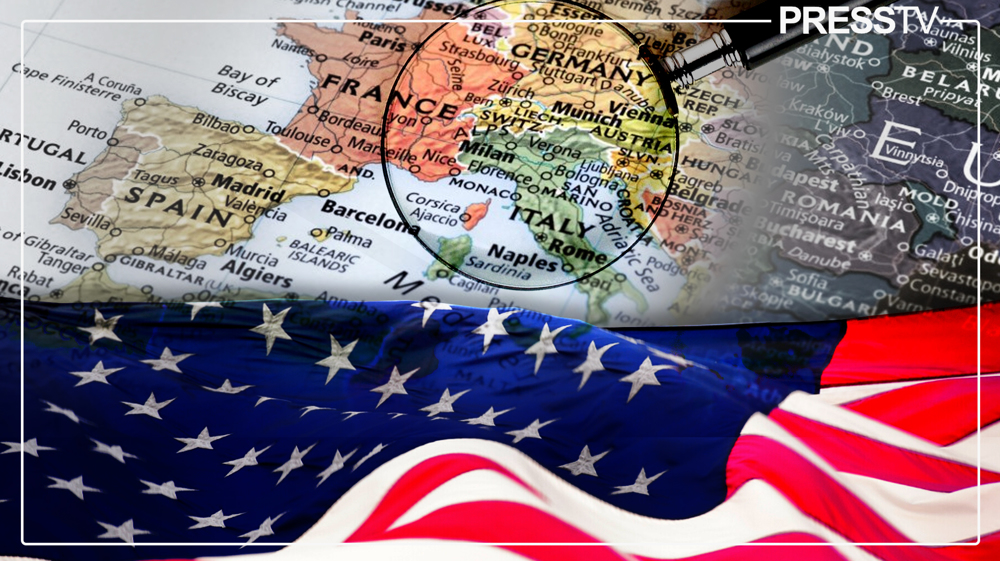 Composition of image showing in a circle in the upper part Central Europe indicated in a circle on a map and in the lower part the US flag. Photo: PressTV.

Imperial functionaries, even in a “diplomatic” capacity, continue to brazenly declare that their exceptionalist control over the world is mandatory.

If that’s not the case, competitors may emerge and steal the limelight – monopolized by US oligarchies. That, of course, is absolute anathema.

The hegemon may be “transparent” at least in this domain because it still controls a massive international network of institutions, financial bodies, politicos, CEOs, propaganda agencies and the pop culture industry. Hence this supposed invulnerability breeding insolence.

Is Nord Stream 2 the Real Reason Behind the Ukraine Conflict?

Panic in the “garden”
The blowing up of Nord Stream (NS) and Nord Stream 2 (NS2) – everybody knows who did it, but the suspect cannot be named – took to the next level the two-pronged imperial project of cutting off cheap Russian energy from Europe and destroying the German economy.

From the imperial perspective, the ideal subplot is the emergence of a US-controlled Intermarium – from the Baltic and the Adriatic to the Black Sea – led by Poland, exercising some sort of new hegemony in Europe, on the heels of the Three Seas Initiative.

But as it stands, that remains a wet dream.

On the dodgy “investigation” of what really happened to NS and NS2, Sweden was cast as The Cleaner, as if this was a sequel of Quentin Tarantino’s crime thriller Pulp Fiction.

That’s why the results of the “investigation” cannot be shared with Russia. The Cleaner was there to erase any incriminating evidence.

As for the Germans, they willingly accepted the role of patsies. Berlin claimed it was sabotage, but would not dare to say by whom.

This is actually as sinister as it gets, because Sweden, Denmark and Germany, and the whole EU, know that if you really confront the Empire, in public, the Empire will strike back, manufacturing a war on European soil. This is about fear – and not fear of Russia.

The Empire simply cannot afford to lose the “garden.” And the “garden” elites with an IQ over room temperature know they are dealing with a psychopathic serial killer entity which simply cannot be appeased.

Meanwhile, the arrival of General Winter in Europe portends a socio-economic descent into a maelstrom of darkness – unimaginable only a few months ago in the supposedly “garden” of humanity, so far away from the rumbles across the “jungle.”

Well, from now on barbarism begins at home. And Europeans should thank the American “ally” for it, skillfully manipulating fearful, vassalized EU elites.

Way more dangerous though is a specter that very few are able to identify: the imminent Syrianization of Europe. That will be a direct consequence of the NATO debacle in Ukraine.

From an imperial perspective, the prospects in the Ukrainian battlefield are gloomy. Russia’s Special Military Operation (SMO) has seamlessly morphed into a Counter-Terror Operation (CTO): Moscow now openly characterizes Kiev as a terrorist regime.

The pain dial is incrementally going up, with surgical strikes against Ukrainian power/electricity infrastructure about to totally cripple Kiev’s economy and its military. And by December, there’s the arrival on the front lines and in the rear of a properly trained and highly motivated partial mobilization contingent.

The only question concerns the timetable. Moscow is now in the process of slowly but surely decapitating the Kiev proxy, and ultimately smashing NATO “unity.”

The process of torturing the EU economy is relentless. And the real world outside of the collective West – the Global South – is with Russia, from Africa and Latin America to West Asia and even sections of the EU.

It is Moscow – and significantly not Beijing – that is tearing apart the hegemon-coined “rules-based international order,” supported by its natural resources, the provision of food and reliable security.

And in coordination with China, Iran and major Eurasian players, Russia is working to eventually decommission all those US-controlled international organizations – as the Global South becomes virtually immune to the spread of NATO psyops.

The Syrianization of Europe
In the Ukrainian battlefield, NATO’s crusade against Russia is doomed – even as in several nodes as much as 80 percent of the fighting forces feature NATO personnel. Wunderwaffen such as HIMARS are few and far between. And depending on the result of the US mid-term elections, weaponization will dry out in 2023.

Ukraine, by the spring of 2023, may be reduced to no more than an impoverished, rump black hole. The imperial Plan A remains  Afghanization: to operate an army of mercenaries capable of targeted destabilization and or/terrorist incursions into the Russian Federation.

In parallel, Europe is peppered with American military bases.

All those bases may play the role of major terror bases – very much like in Syria, in al-Tanf and the Eastern Euphrates. The US lost the long proxy war in Syria – where it instrumentalized jihadis – but still has not been expelled.

In this process of Syrianization of Europe, US military bases may become ideal centers to regiment and/or “train” squads of Eastern Europe émigrés, whose only job opportunity, apart from the drug business and organ trafficking, will be as – what else – imperial mercenaries, fighting whatever focus of civil disobedience emerges across an impoverished EU.

It goes without saying that this New Model Army will be fully sanctioned by the Brussels EUrocracy – which is merely the public relations arm of NATO.

A de-industrialized EU enmeshed into several layers of toxic intra-war, where NATO plays its time-tested role of Robocop, is the perfect Mad Max scenario juxtaposed to what would be, at least in the reveries of American Straussians/neo-cons, an island of prosperity: the US economy, the ideal destination for Global Capital, including European Capital.

The Empire will “lose” its pet project, Ukraine. But it will never accept losing the European “garden.”