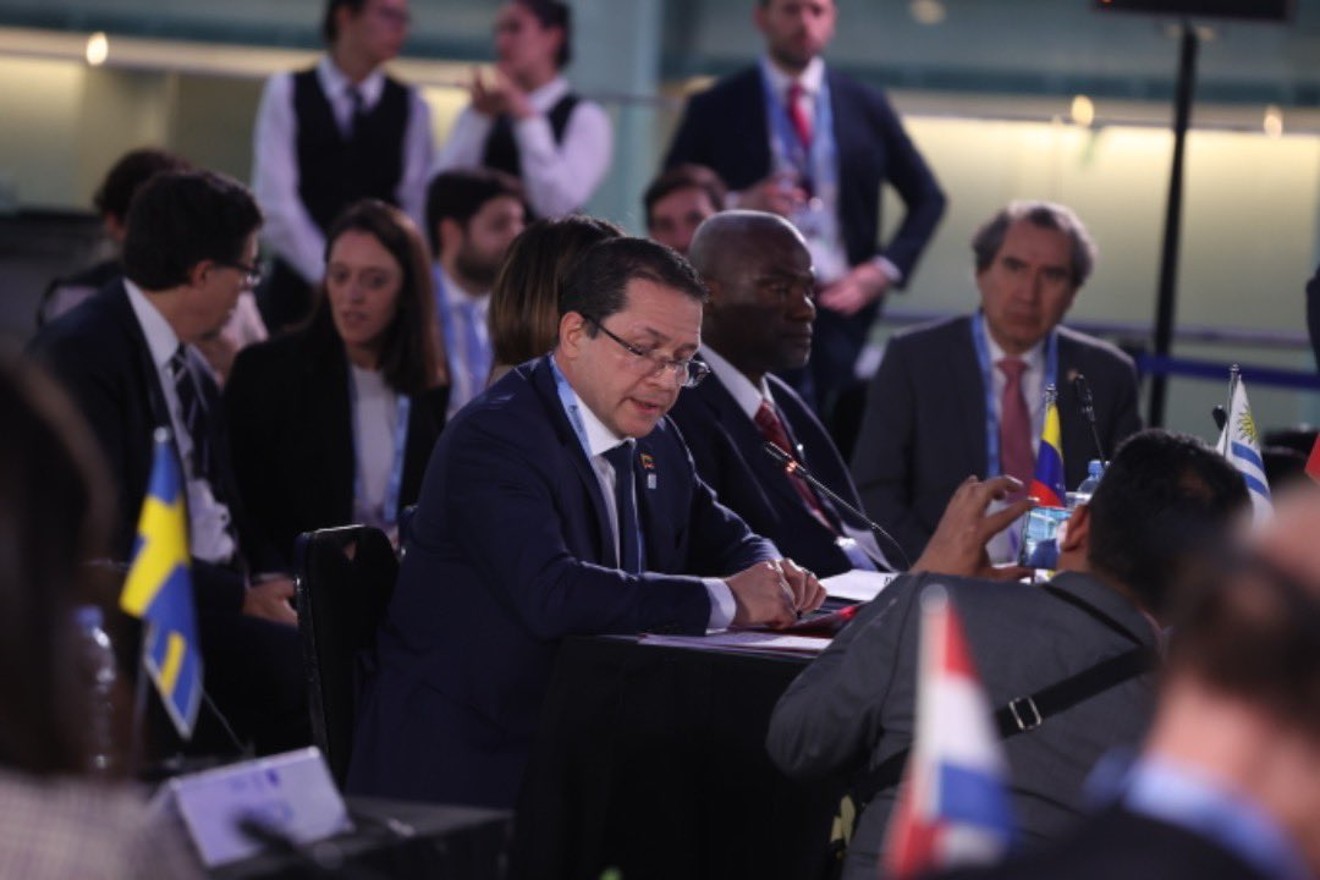 On Thursday, October 27, Venezuelan Foreign Minister Carlos Faría said while attending the 3rd CELAC–EU Foreign Ministers Meeting that there can be no talk of dialogue, democracy, human rights, and goodwill without respect for the countries of Latin America and the Caribbean.

Referring to the unilateral coercive measures imposed by the European Union against Venezuela and Nicaragua, Minister Faría stated that “one cannot speak of dialogue, democracy, human rights, and goodwill if collective punishments are maintained against our peoples.”

He made these remarks during the 3rd CELAC–EU Foreign Ministers Meeting, which is being held in Buenos Aires, capital of Argentina, and which preceded the 23rd Meeting of CELAC Foreign Affairs Ministers, which took place on Wednesday in the same city.

The Venezuelan foreign minister pointed out how, despite the unilateral coercive measures imposed by the EU on the Venezuelan people, in 2022 the Venezuelan economy showed the best performance in Latin America. He also stressed that this achievement stems from the leadership of President Nicolás Maduro and “the courageous position and response given by our Venezuelan people”.

“We hope that on November 14, the European Union [will decide] not to extend its unilateral sanctions regime against Venezuela, and we demand that the same treatment be given to our Nicaraguan brothers and sisters,” said Faría. He expressed that Caracas expects from Brussels support for “the lifting of the criminal, economic, commercial, and financial blockade against our Cuban brothers and sisters,” in reference to the unilateral and illegal coercive measures that have been imposed by Washington on Cuba for more than 60 years.

Faría emphasized that Cuba is not a state sponsor of terrorism, a concept fabricated by the US by placing the island in an illegal list which disrupts the Cuban economy and tramples on the dignity of the Cuban people. He also stressed that neither the government of Nicaragua nor that of Venezuela violates human rights, and underlined the devastating effects of the criminal unilateral blockades on the Latin American people.

No more tutelage
Faría pointed out that cooperation between Latin America and the Caribbean and the EU is impossible “if the neo-colonial vision of our countries being under the tutelage of the United States is not changed.”

He added that the opportunity offered by this meeting between the two regions, which has been neglected for five years, must be planned from the perspective of “true respect and the desire for coexistence among our nations, without exclusion, aggression, manipulation, and double standards.”

He also emphasized that “Venezuela is willing to help the European Union overcome the imminent energy crisis with our gas and hydrocarbons and to place them at its disposal, as our president, Nicolás Maduro Moros, has repeatedly said.”

Repudiating the European blockade on Venezuelan oil
Faría stressed that the energy relationship can only be achieved “on the basis of joint trade, under equal conditions and benefits.”

“You know that in our country, there are two giant European companies [Repsol and ENI] operating in the energy sector, and we are waiting for those who dictate the coercive measures to grant them permission so that the sale of hydrocarbons can be carried out,” he said. He also stressed that, unlike the Venezuelan resources illegally withheld or usurped abroad, in the case of the oil companies, no assets in Venezuela have been “seized or stolen; on the contrary, they are well protected and ready to continue operations.”

He also called on the European countries to condemn the oil embargo against Venezuela and to join forces to resume the “healthy commercial relation that has always existed between our Venezuelan oil industry and the European oil companies. We are ready to re-establish a new relationship.”

Rise of BRICS: The Economic Giant That Is Taking on the West

Argentina’s Fernández looks to Europe over BRICS
During the inauguration of the bi-regional meeting, attended by Alberto Fernández, president of Argentina, the host country, and Josep Borrell, EU high representative for External Affairs and Security and vice president of the European Commission, the Argentinian president, in contrast to Venezuela’s requests, stated that “Europe has to help Latin America to be able to achieve development,” and regarding his own nation, that “if Argentina has to have a partner, that partner has to be Europe.”

While Fernández pointed out the injustices of the existing system and the inequality exposed by the COVID-19 pandemic and how countries south of the US, especially the Caribbean, suffer the consequences of climate change for which the global North is responsible, he considered Europe as the most viable option to achieve the longed-for industrialization that would allow the Latin American and Caribbean region to overcome poverty.

Such statements could be analyzed as contradictory to Argentina’s aspirations to join BRICS (Brazil, Russia, India, China and South Africa), which Fernández had himself announced in June after participating virtually in the 14th BRICS Annual Summit.

At that event, he highlighted his nation’s aspiration to be one of the full members of the emerging group of countries that aims to form a different and harmonious world as opposed to the political, commercial, monetary, economic, industrial, technological and military hegemony of the United States and the European Union, Canada, the United Kingdom, and Australia.

On that occasion, Fernández also emphasized how “a few concentrate wealth by abusing financial power, while millions of human beings suffer in poverty,” in a clear allusion to the policies of the EU, the UK, and the US, and urged the creation of “a global financial structure that takes into account the needs of growth, trade, investment and, fundamentally, the needs of the poor.” He said this at a time when the EU was heaping sanctions on the Russian economy and promising to destroy Russia. Almost five months later, Fernández, with the EU representative Borrell as a guest in his country, has changed his tone and is considering Europe as the indispensable partner for Argentinian, Latin American, and Caribbean development.