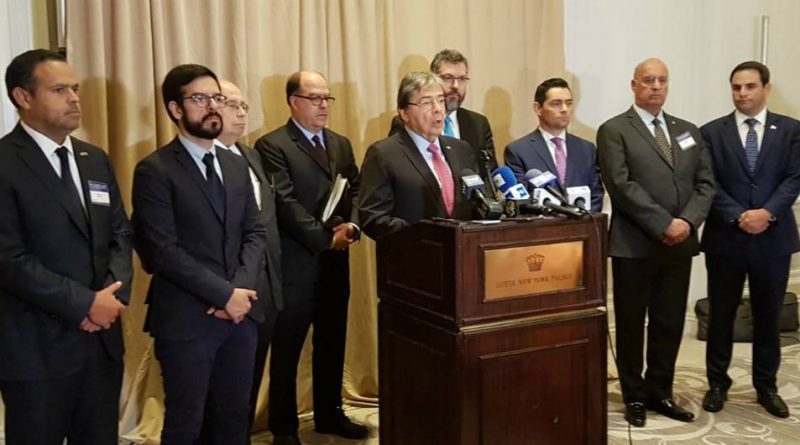 The foreign ministers of the member countries of the Inter-American Treaty of Reciprocal Assistance (Tiar) agreed on Monday to impose a series of sanctioning measures against the government of Venezuelan President Nicolás Maduro during a Consultation meeting in New York, United States.

The meeting of the Consultative Body of Ministers of Foreign Affairs of the Tiar was chaired by the Colombian Foreign Minister, Carlos Holmes Trujillo.

The resolution in the framework of the Tiar – approved with 16 votes in favor, one against (Uruguay) and one abstention (Trinidad and Tobago) – argues that the Venezuelan territory has become a supposed refuge for terrorist organizations and illegal armed groups “with the complacency ”of the Venezuelan government.

In addition, mention is made of the alleged violation of human rights, based on the report presented last July by the UN High Commissioner for Human Rights.

Using the aforementioned arguments, the foreign ministers of the Tiar countries took the following measures:

1) “Identify or designate” persons and entities associated with the administration of President Nicolás Maduro, involved in illegal activities to investigate, capture, extradite, sanction and freeze their assets, located in the territories of the States Parties to the Tiar.

2) “Identify or designate” persons who exercise or have served as senior government officials of the Venezuelan president and who have participated in acts of corruption and serious violations of human rights.

3) To instruct the financial intelligence units of the TIAR States to prepare a consolidated list of persons linked to the government of President Nicolás Maduro identified or designated, as established in numerals 1 and 2 of this resolution.

4) Create an operational network, composed of financial intelligence and public security authorities and other competent authorities of the TIAR States, to intensify legal, judicial and police cooperation with the purpose of investigating money laundering events, illegal drug trafficking, terrorism and its financing and transnational organized crime practiced by individuals and entities linked to the administration of Nicolás Maduro.

5) To instruct the Permanent Representatives before the Organization of American States of the member states of the TIAR to monitor the situation in the Bolivarian Republic of Venezuela and its impact on the region.

6) Keep open the Thirtieth Meeting of Consultation of Ministers of Foreign Affairs, acting as the Consultation Body of the TIAR, and hold a new session within two months.

7) To request the Secretary General of the Organization of American States to transmit the content of this Resolution to the Security Council of the United Nations.

This actions are just an extension of US aggression towards Venezuela that have prove to be ineffective in generating the regime change expected in Washington, while frustration grows among right wing elements in Venezuela and abroad about the inability of Guaido’s “diplomats” to represent Venezuela within the framework of the UN General Assembly because they lack the international recognition required in that sense.

Featured image: Guaido’s “diplomats” around Colombian FM Trujillo doing whatever they can to make some noise. Long faces say it all. Photo courtesy Colombian MFA