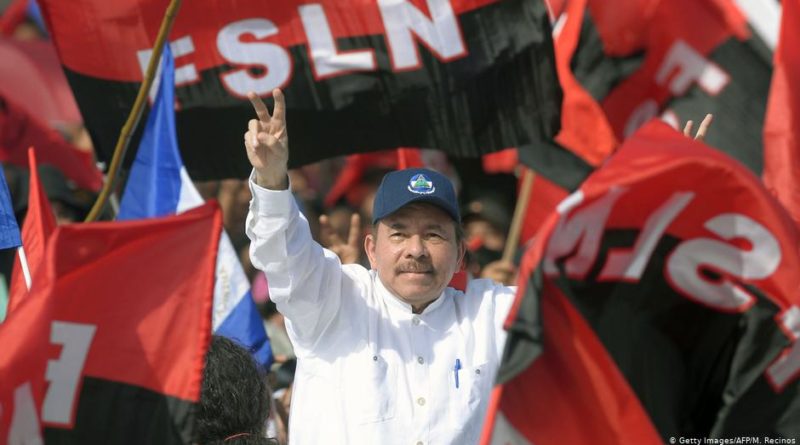 [AFGJ Editor’s Note: The Sandinista Revolution was a revolution of young people. The guerilla fighters in the countryside were called “los muchachos” because they were so young, which is why even today Nicaragua’s voting age is 15. The universities were hotbeds of revolution in the Managua as well. The Triumph of the Revolution was more than 40 years ago and those muchachos and muchachas now have children and grandchildren of their own. The narrative around the failed coup of 2018 was that it was a student-led uprising in an effort to capture some of that revolutionary mythos. It is true that in the early stages, private university students who had received training from the US National Endowment for Democracy and funding from USAID were at the center of the turmoil, but they were quickly replaced by leaders of the political opposition. The majority of Nicaraguan youth are true children of the revolution. We are happy to give Gaby Ulloa a platform in English to tell her story.]

Of my almost 24 years, 13 have been with the Sandinista government.

Before these 13 years, I only remember the famous blackouts of 12 hours or more; the insecurity that characterized the country; that my parents had to pay for a pizza in a restaurant so that my brother and I would have a space to play with friends because parks were only a dream.

I remember giving a school desk to one of my cousins because in the neighborhood school the children sat on the floor. Or the absurd number of children at traffic lights asking for a peso; the ruined streets and roads because there was no maintenance or construction. I remember a story of my grandmother and an uncle who were travelling to Siuna and had to get off the bus because it got stuck on the terrible road. [Now Nicaragua has the best roads in the region.]

I’ll never forget how a friend’s father got me out of the school where I was studying because outside the government was repressing a university protest for 6%, a meaningful struggle of the students at that time trying to secure government support for higher education. [Today public university education is free.]

I also remember as if it were yesterday, November 5, 2006, when my family and I were glued to the television waiting for the election results.

And after the nightmare we had lived with the neoliberal governments, we came back into power; Daniel was elected President! We went out in the streets to celebrate with the red and black flag that has never been missing from my home. We walked through the streets of Managua living the emotion and joy that this awaited news had generated, encountering people from all the neighborhoods and communities. The only thing I don’t remember is the time we returned home, surely it was almost 12 midnight.

Now we are the president’s people! What we the Sandinistas have achieved in these 13 years with President Daniel’s leadership has not been easy at all; the work is hard and 24/7.

But it is rewarding when we see that our children have their school lunch on the table.

When we young people have the opportunity to study for free a technical career or a career at the universities.

When we women have obtained important positions in the public sector and have had our rights recognized, the most basic and elementary ones that we didn’t have before.

RELATED CONTENT: Battling with Beans and Rice: Food Sovereignty as a Defense Against US Imperialism – Venezuelan Comunero in Nicaragua (Interview)

When, after a flood or earthquake, the young people of the Sandinista Youth leave their homes and families to go and care for the affected families giving them food packages, mattresses, personal hygiene kits, gas tank cookers and so on.

When the most remote community in this country has electricity service.

When the Pacific Coast is linked to the Caribbean through roads for the first time ever.

When international cooperation invests in Nicaragua and lauds the government for its management.

When we implement the “Love for the Little Ones” program.

When we see families enjoying recreational spaces everywhere in the country.

When we see the construction of new hospitals, health centers and maternity homes.

When we see that a family has been able to fulfill its dream of having its own decent home.

And I could go on to mention many more achievements.

But it is necessary, people say. Yes, of course it is, and we are aware of it. But that’s why we don’t rest, so that our country can continue on the path of prosperity.

Congratulations compañeros for these 13 years of Sandinista government!