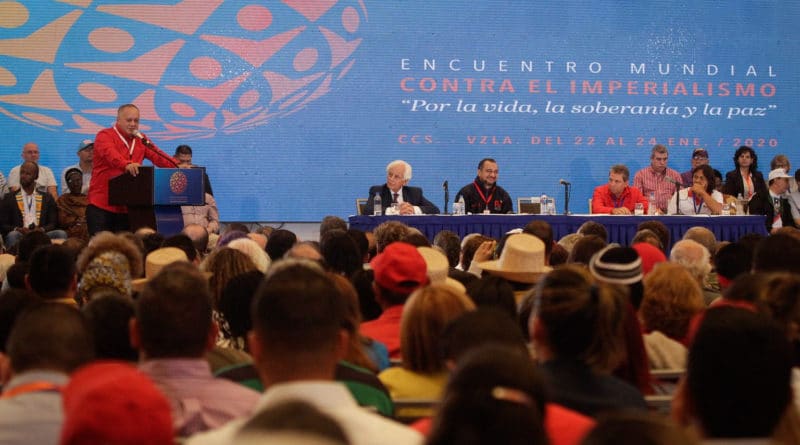 Next, we share the final Declaration of the “World Anti-Imperialist Meeting” held in Caracas between January 22 and 24, 2020, in which 403 international delegates and 2,096 national delegates of the Great Patriotic Pole and the People’s Congress participated and also organizations and social movements that accompany the Bolivarian Revolution.
Below the full text:

The delegations of the political parties and social movements, gathered in the city of Caracas, capital of the Bolivarian Republic of Venezuela, on the occasion of the “World Anti-Imperialist Meeting”, after the deliberations we have reached the following conclusions:
The future of humanity is in grave danger. Peace on the planet is seriously threatened as a result of the military aggressive policy of the US and its allies, as well as the deadly arms race that only reports dividends to large corporations in the military industry. War is the favorite mechanism of imperial expansionism, especially that of the United States, and that we observe dramatically in the most recent regional conflicts that have seriously affected the people of Syria, Yemen, Iraq, Libya, Afghanistan and the entire region.
Likewise, the human race suffers the ravages caused by the voracity of an economic model that in its suicidal deployment destroys nature by the insatiable obsession to maximize profits. That is precisely the logic of the capitalist system, which no longer compromises its functioning but also endangers humanity’s itself.

RELATED CONTENT: President Nicolas Maduro Addresses World Anti Imperialist Congress
The neoliberal model that implements the globalization of large corporations under the domination of imperialist states has marked the world economy with great fragility. Crises are more recurring and large financial speculators dominate the planet. In the distribution of wealth generated, a parameter of inequalities, injustices and exclusion has been imposed affecting an increasing part of the world’s population. The scourges of poverty and misery affect billions of people like never before in the history of mankind. Undoubtedly, the development of capitalism engenders unsustainable phenomena, from the social, political and ethical point of view.
In addition to an ethical crisis derived from the prevailing way of life of market economies, where national cultures and human values are buried, in favor of imposing a consumer society. The cult of the anti-values of capitalism contributes to potentiate the crisis of the human condition generated in the current model of coexistence.
Imperialism is in crisis and this makes it much more aggressive, dangerous and destructive. Before the twilight of the unipolar world, US imperialism implements a strategy of global domination. The White House’s geopolitical bet of resisting the peoples and the emergence of new powers has translated into a defense of their hegemony, through a neo-colonial policy aimed at appropriating natural resources, especially energy resources, controlling markets and politically dominating nations.
To preserve the current unjust world order, imperialism violates public international law, has turned the world into a great theater of military operations, develops unilateral coercive measures, imposes extraterritorial laws, attacks multilateralism, violates the sovereignty of nations and suppresses the self-determination of peoples. In its arrogant conception, its borders reach as far as its expansionist interests extend.
In line with this policy, imperialism resorts to military intervention, political destabilization of governments, wars and economic blockade. Its strategic planning conceives NATO as the global military arm of neoliberalism. Additionally, within the framework of its Doctrine of the Unconventional War, terrorist actions, the use of paramilitaries, the prosecution of anti-imperialist leaderships and selective murder, are some of the most emblematic actions of a genocidal policy, which endanger the humanity.
Such practices have been “legitimized” through the cultural industry of capitalism, the great transnationals of communication and the use of social networks. Likewise, the use of “Big Data” has become a formidable weapon to modify the behavior of the population and influence their political decisions.
In the attempt to impose the “single thought”, the powerful of the world manipulate religious beliefs, try to justify the current power relations to the detriment of democracy, the imposition of the free market, the racism of Eurocentric race, the segregation of minorities, gender oppression, the eugenic character of the global educational model, among many other factors, that perfectly fit the requirements of the capital dictatorship.
Neoliberal capitalism strengthens the exploitation of the working class, further oppresses women in terms of maximizing the profits of large transnationals, snatches the future from youth and blurs the identity of the original peoples. This shows that the solution to the great problems of today’s world demand a new model of human coexistence.

RELATED CONTENT: “For Life, Sovereignty and Peace” the World Anti-Imperialist Meeting is Installed in Caracas (Soleimani + Sabotage)
In that context, the multicentric and pluripolar world emerges with greater force. The political and economic strengthening of powers such as Russia and China, along with that of other nations, make an increasingly serious counterweight to the power of US imperialism. Obviously, the heroic resistance in the Middle East, the struggles of the peoples of Latin America and the Caribbean, have contained and pushed back the plans of imperialism.
Moreover, the experiences of progressive governments in the world are already emerging as an alternative to neoliberalism. An example of this is the Bolivarian Revolution, which is projected as an anti-imperialist referent with enormous popular strength within the framework of the powerful civic-military union and on the basis of the ideology of Liberator Simón Bolívar and Commander Hugo Chávez.
This has provoked the brutal attack of US imperialism against the Venezuelan people, which has lavished dignity and love on the country, ratifying its course towards socialism in numerous electoral processes that endorse the vigorous participatory democracy existing in this country. Hard days of popular struggle have defeated threats of US military intervention, attempted coup d’etat and foci of terrorist violence.
This example of struggle alongside that of Nicaragua and Cuba, as well as recent advances in Argentina and Mexico, has allowed the strengthening of anti-imperialist forces and will lead to the strengthening of new regional integration mechanisms (CELAC, ALBA-TPC, PETROCARIBE, etc.) ). Although in Honduras, Paraguay, Brazil, Ecuador, El Salvador and Bolivia, neo-colonialism has been repositioned within the framework of the new edition of the Monroe Doctrine, popular struggles continue.
In the rest of the world, people also resist, revolt and popular governments exercise their sovereignty. Anti-imperialist unity is a strategic objective that cannot be postponed.
In this context, the “World Anti-Imperialist Meeting” states:

Likewise, the “World Meeting against Imperialism” agrees to:

Approved in the City of Caracas, Cradle of the Liberator Simón Bolívar and Capital of the Bolivarian Republic of Venezuela on January 24, 2020.