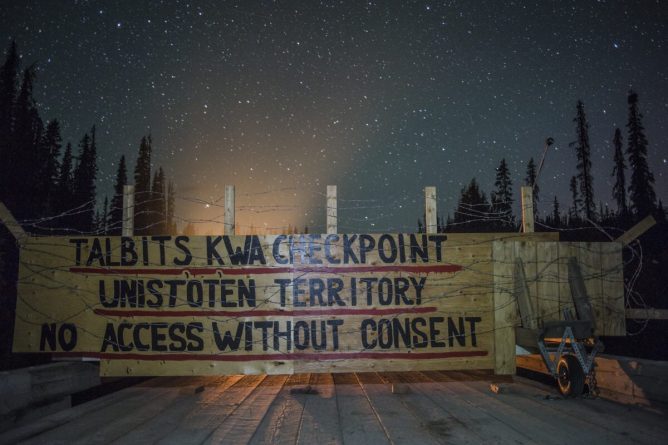 Our people’s belief is that we are part of the land. The land is not separate from us. The land sustains us. And if we don’t take care of her, she won’t be able to sustain us, and we as a generation of people will die.” – Freda Huson, Unist’ot’en Hereditary Spokesperson

Imagine living in a country where at any time, armed forces could raid your home and property, using force to arrest you for occupying the places you’ve always called home. Despite claims that we are living in an age of “reconciliation,” for Indigenous people living on their traditional territories in Canada, this is not an exercise of the imagination, but a daily reality.

On January 7, just before 3 p.m. most British Columbians were carrying on with the daily tasks of life: picking up kids from school, trying to get through the last two hours at the office, squeezing in an afternoon workout. This was not the case for the Gidumt’en Clan of the Wet’suwet’en people; for them, this was anything but an average Monday.

At 2:51 p.m., Gidumt’en land defenders were bombarded by the RCMP who forcefully breached and dismantled a peaceful checkpoint on unceded Wet’suwet’en territory near Houston, BC. When it was over, 14 land protectors including an elder and the Gidumt’en spokesperson Molly Wickham, mother of two, were arrested. There were additional reports that the RCMP jammed communications in the area during the raid, that the military was present during the police enforcement operation and that the hereditary chiefs of the Wet’suwet’en were blocked from accessing their territory during this time.

The Gidumt’en Clan had set up the checkpoint up on their territory to protect the Unist’ot’en camp after an injunction was granted without recognition or consent of the Wet’suwet’en hereditary chiefs. This injunction allowed for Coastal GasLink to access Wet’suwet’en territories and bypass the gate at the Unist’ot’en checkpoint (a protective measure put in place in 2009 to keep industry from breaching Wetsu’wet’en sovereignty). The $6.2 Billion pipeline owned by TransCanada (of which Coastal GasLink is a subsidiary) is planned to be 670 km long and would carry natural gas from the Dawson Creek area to the port of Kitimat. According to Hupacasath First Nation leader and University of Victoria professor, Judith Sayers, it is the RCMP and not the Wet’suwet’en who are on the wrong side of the law.

“As with most lands in British Columbia, aboriginal title exists on the Wet’suwet’en lands in question. And based on this title, they have the right to defend their lands from development that will adversely affect them. The Wet’suwet’en were never defeated in a war, never surrendered their lands and never entered into a treaty,” she wrote in an Op-Ed from The Tyee.

SO, WHAT IS UNIST’OT’EN CAMP?

Why is Unist’ot’en nationally significant?

The Unist’ot’en Settlement Camp—60 km south of Houston, B.C—was established in 2009 by Unist’ot’en clan spokeswoman, Freda Huson. The settlement is directly in the path of several proposed pipelines and was created as a strategic protective stand to safeguard Wetsu’wet’en territory from being destroyed by industry exploitation. Over the years, the camp has flourished into a community, as well as one of the most significant global examples of Indigenous land-based sovereignty. Today, it includes several buildings and a healing centre. The camp is frequently visited by Indigenous delegations from around the world, as well as by non-Indigenous allies. Unist’ot’en’s interconnected structures include a traditional pithouse, permaculture garden, a bunkhouse for supporters, along with the Healing Centre. For the Wet’suwet’en living at Unist’ot’en, maintaining cultural practices is just as important as stopping the pipelines. The Unist’ot’en have never stopped hunting, fishing, trapping and picking berries on their territories. For Freda Huson, along with others, it has become a full-time home and is visited often by her chiefs and family members.

Article 10 of the United Nations Declaration on the Rights of Indigenous Peoples (UNDRIP) states that Indigenous peoples shall not be forcibly removed from their lands or territories. According to UNDRIP, “no relocation shall take place without free, prior and informed consent of the Indigenous peoples concerned.” Considering that First Nations reservation lands make up less than one per cent of the territory in Canada, it is crucial that Canadians critically question why such a high percentage of industrial extraction is taking place on Indigenous lands. Not only is Unist’ot’en an embodiment of what supposed “reconciliation” could actually look like (ie acknowledging and protecting Indigenous rights and title); in this case, Canada is breaching the legal precedent set by its own judiciary systems regarding Indigenous rights and title (see the Sparrow and the Tsilhqot’in rulings). Given that genocide is defined by the UN as “the intent to destroy, in whole or in part, a national, ethnical, racial or religious group,” conscious Canadians who seek cross-cultural healing and equality must interrogate whether what is being done to Indigenous peoples wishing to remain on their traditional territories and continue their cultural practices and identity, falls outside of this definition. WHAT YOU CAN DO NOW

6) Register to provide support on the frontlines

8) Organize a community fundraiser to support the camps

HOW TO LEARN MORE

Guiding principles for supporting the Camps, by Wetsu’wet’en Access Point

Nine things you need to know about Unist’ot’en, The Tyee

The Unist’ot’en movement, not the RCMP, has the law on it’s side , The Tyee

Unist’ot’en: Holding their ground against oil and gas pipelines, AJ+ Nikki Sanchez is a Pipil/Maya and Irish/Scottish academic, Indigenous media maker and environmental educator. Nikki holds a masters degree in Indigenous Governance and is presently completing a PhD with a research focus on emergent Indigenous media. She was the acting David Suzuki Foundation “Queen of Green” from 2016-2018 where her work centered on digital media creation to provide sustainable solutions for a healthy planet, as well as content creation to bring more racial inclusivity into the environmental movement. Her most recent media project was the VICELAND series “RISE” which focused on global Indigenous resurgence. RISE debuted at Sundance in February 2017 and has received global critical acclaim, recently winning the Canadian Screen Guild Award for Best Documentary series. For the past decade, Nikki has also worked as an Indigenous environmental educator, curriculum developer, and media consultant. She currently runs an independent consulting company which specializes in decolonial and equity training for businesses and institutions.