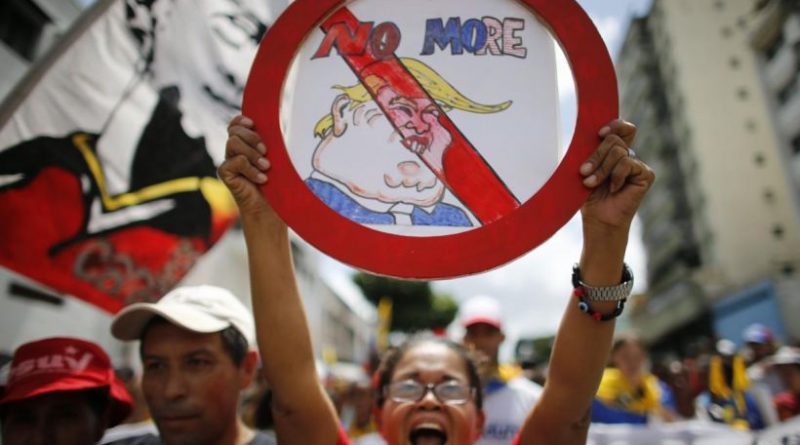 What reason can lead a son or daughter of Venezuela, all bearers of the indelible fire against foreign oppression, to raise the hand of those who intend to tread the soil of their homeland and make the people suffer?

As much as we turn the matter over, for the many economic interests that may remain in the path of sedition and betrayal, we find no valid arguments for such infamous behavior. What is the purpose? To incinerate like Nero the greatness of their country and then administer its ashes? The intention to wash the imperialist will to mercilessly plunder our wealth, sacrificing the life of our people, cannot enter into the reasoning of the children of Bolivar and their libertarian fire.

It is necessary to review the history of our independence to understand that there have always been opportunists, those groups and individuals who give themselves up to temptation and the fears of oppression, as long as they can reserve for themselves a few material crumbs or political favors.

There was already noticeable tension in the process to reach the Declaration of Independence in 1810-11 among those who proposed temporary freedom as a mechanism to safeguard the colonial properties of Ferdinand VII. Their proposal was to return his overseas interests to the King in a peremptory period. On the other hand, from the Patriotic Society, Bolívar already claimed in a famous speech the definitive resolution of this conflict in favor of Venezuelan interests:

“It is discussed in the National Congress what should be decided. And what do they say? That we should start with a confederation, as if we were not all confederated against foreign tyranny. That we should attend to the results of Spain’s policy. What does it matter if Spain sells its slaves to Bonaparte or that they keep them if we are resolved to be free? Those doubts are sad effects of old chains. That the great projects must be prepared calmly! Three hundred years of calm are not enough? The Patriotic Board respects, as it should, the Congress of the nation, but Congress must listen to this Patriotic Society, center of lights and of all revolutionary interests. Let us set without fear the fundamental rock of South American freedom: to hesitate is to lose ourselves.”

This duality, this tension between full emancipation and surrender, lives in Venezuelan political identity, and we have always dealt with it.

Throughout the independence struggle, the duality of national political operators had to be fought. Between victories and setbacks our independence was strengthened and with it the ability of the Liberator to interpret the reality of each of the actors who put in dispute life in politics and in war.

On July 5, 1811 the Declaration of Independence of Venezuela of the Spanish Empire is signed (Photo: Painter Juan Lovera)

On September 7, 1814, in the Carúpano Manifesto, Simón Bolívar reflects on the causes of the fall of the Second Republic. In one of the passages he speaks of those people who somehow still intend to live under the Spanish empire:

“It is not fair to destroy men who do not want to be free, and it is not freedom that is enjoyed under the rule of arms against the opinion of fanatical beings whose depravity of spirit makes them love chains as social bonds.”

From that capacity of inclusion, to understand that freedom is for everyone, even for those who do not want it and who prefer to continue under the despotism of the Spanish Crown, Bolívar assumes these groups as an integral part of the country. The Liberator follows the path of building an indivisible nation in the face of foreign interests and calls for the need to make a homeland for all, even for those who do not recognize it and somehow do not feel part of it.

After the acts of independence, numerous internal conflicts and skirmishes broke out that threatened national integrity, but no event threatened both the national sovereignty and the very existence of the country, as the naval blockade of the Venezuelan coasts of 1902. The sovereign vision of Cipriano Castro led the powers of his time to intervene in our country in the most untimely, violent and pernicious way.

President Castro’s response, as a nationalist, a strong follower of the Bolivarian doctrine, was a call to all sectors of the country, regardless of their beliefs, status or political position, for the integral defense of national interests. This was reflected in the following fragment of his famous proclamation:

“(…) But justice is more on our side, and the God of the Nations that inspired Bolivar and the plethora of heroes who accompanied him in the great work of bequeathing, at the cost of great sacrifices, Homeland, Freedom and Independence, will be the one who, in these decisive moments for the life of our nationality, inspires us in the struggle, encourages us in the sacrifice and assists us in the great work of consolidating National Independence. For my part, I am willing to sacrifice everything on the august altar of the Fatherland; everything, even what could be called my resentment because of our intestinal differences. I have no memory for what ingratitude there may be in the past. All that was hostile to my purposes, everything that could leave a trace of pain in my heart, is erased in my thought as a politician and as a warrior. In front of me there is nothing left but the bright vision of the country, as Bolívar dreamed it, as I want it.”

This political testament was not just words, it was accompanied by a total national call for the defense of the Fatherland. Even his most bitter political and military rivals, who were imprisoned, were called to the new liberation of the homeland from the foreign threat.

One of the most characteristic personages was José Manuel “El Mocho” Hernández, who had taken up arms against Castro a couple of years before and was imprisoned at the San Carlos Barracks. Once released in the face of the foreign threat, he launched this firm statement:

“As soon as I breathed in the air of Freedom, I received with it the news that the foreigner’s foot has trampled our ground. I need no more! The country is in danger and I forget all my resentments to come to its aid.”

Today the Homeland faces the greatest threat in its recent history. It is sad that there is a fraction of the country that has propitiated and placed the possibility of national dignity being trampled on a silver platter. From a petty, thoughtless and ahistorical stance, the Venezuelan oligarchy, at the service of the American ruling elite, promotes and justifies sanctions and blockades against the people. They receive only crumbs for the delivery of national wealth and they fight over them like animals of prey in sad scenes of transnational corruption. Any action of that Venezuelan opposition composed of a plethora of spirits kneeling to imperial power, is aimed at violating the dignity and libertarian history that determines us.

These compatriots? They remind us of the Cuban Apostle, José Martí, in his impeccable publication, Nuestra América:

“Only runts whose growth was stunted will lack the necessary valor, for those who have no faith in their land are like men born prematurely. Having no valor themselves, they deny that other men do. (…) These sons of carpenters who are ashamed that their father was a carpenter! These men born in America who are ashamed of the mother that raised them because she wears an Indian apron, these delinquents who disown their sick mother and leave her alone in her sickbed! Which one is truly a man, he who stays with his mother to nurse her though her illness, or he who forces her to work somewhere out of sight, and lives off her sustenance in corrupted lands, with a worm for his insignia, cursing the bosom that bore him, sporting a sign that says “traitor” on the back of his paper dress-coat? These sons of our America, which must save herself through her Indians, and which is going from less to more, who desert her and take up arms in the armies of North America, which drowns its own Indians in blood and going from more to less! These delicate creatures who are men but do not want to do men’s work!(…)”

Therefore, President Nicolás Maduro calls us to close ranks in defense of our sacred sovereignty. And them, he also summons them. We must understand as a united nation that the attack is no longer veiled, that there is no longer any doubt about it, it does not enter the field of interpretation: they threaten us with a military invasion, while imposing a wild blockade that strikes the Venezuelan people in their most felt needs.

It is a blockade that is clearly defined with the purpose of intervening in the internal affairs of the country and, from the outside, altering the democratic course defined by the Venezuelan people. The spokesmen of the Trump Administration, from an absurd obsession with the figure of Nicolás Maduro and against Bolivarian Socialism, which should be noted, cast doubt on his sanity, launch offenses and threats to the integrity of the Venezuelan people. They act outside of International Law and hide in that self perception of police, judge and executioner of the world to justify, with the permission of or forcing those internal lackeys, their racist fundamentalism that aims to end national dignity.

For our part, we are increasingly convinced of being on the right side of the story. We follow the steps and vision of Simón Bolívar, of Hugo Chávez.
Independence and sovereignty are not a possibility, they are always certain and constitute an inescapable patriotic obligation. Returning to Bolivar’s concept, hopefully those “fanatical beings of depraved spirit”, will reflect.

Let the “Mocho Hernández of the 21st century” arise, that beyond internal differences, do not accept the imposition or blackmail of foreign powers and are placed next to and at the height of the patriotic people that, beyond the difficulties, are able to give their life once and a thousand times for their country, its independence and its freedom.

“We are the possibility of the future,” as Chinese poet Valera Mora said.

Featured image: Chavismo mobilized to shout “No More Trump” and collected signatures to demand an end to the US government’s aggressions against Venezuela (Photo: AP)