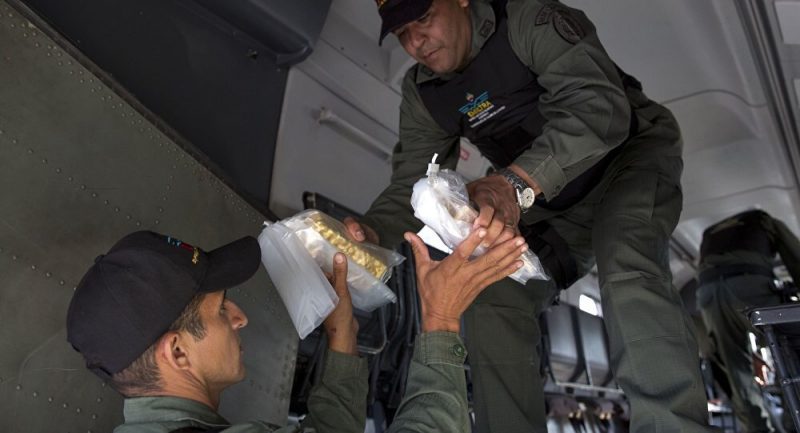 Earlier, the Venezuelan government reported problems in getting access to its gold reserves in the UK and the US as the countries slapped asset freezes on Caracas’ sovereign holdings.

The Venezuelan government removed some eight tonnes of gold from central bank vaults last week and is reportedly planning to sell them to raise hard currency amid Washington’s sanctions pressure, a government source told Reuters.

The government source estimated that Venezuela’s total gold reserves now stand at about 100 tonnes, worth $4 billion, with some 30 tonnes said to have been withdrawn since January to raise much-needed cash to pay for imports of basic commodities amid the US economic blockade. Another eight tonnes of gold were earlier said to have been removed in February.

Opposition lawmaker Angel Alvarado, a supporter of National Assembly leader and self-proclaimed ‘interim president’ Juan Guaido, said high-level officials were at the bank during the operation, and “moved the gold out while the central bank was in contingency mode” amid rolling blackouts which Caracas believes may be the result of sabotage. Alvarado claimed that the bullion would likely be sold abroad, but noted that he did not know where.

A US State Department spokesman commenting on the report said that Washington “condemns all attempts by [Nicolas] Maduro and his supporters to steal resources from the Venezuelan people.” The spokesman encouraged “companies, banks and other entities, whether in the United States or in other countries, not to participate in the former Maduro regime’s fire sale of Venezuelan resources.”

Earlier, Citigroup was reported to have sold off several tonnes of gold placed as collateral by Venezuela’s Central Bank after the Bank missed a 11 March payment deadline. The Venezuelan government reportedly had no means of paying off the loan or otherwise accessing the precious metal, since its assets and operations in the US have been frozen since January.

Shortly after proclaiming himself president in January, Guaido reportedly asked British Prime Minister Theresa May and Bank of England Governor Mark Carney not to return Venezuelan gold bullion worth about $1.56 billion to Caracas, with US Secretary of State Mike Pompeo and Trump National Security Advisor John Bolton similarly lobbying London to help cut off the Venezuelan government’s access to its foreign assets.

Venezuela Sells Off Gold Amid US Pressure

Venezuela’s has faced several  rounds of tough US sanctions against state companies, including the PDVSA oil giant and its US subsidiary Citgo, with the US Treasury blocking some $7 billion in PDVSA assets in January. In February, the Treasury extended Citgo’s licence for 18 months, with the cash to be collected into opposition coffers and blocked from being transferred to Caracas.

The US has threatened secondary sanctions against companies doing business with Venezuela and Cuba in carrying Venezuelan crude oil for sale abroad.

Venezuelan officials have decried US moves as an “economic warfare,” saying that US efforts have “translated into the suffering of many Venezuelans.” Foreign Minister Jorge Arreaza estimated that pressure, including sanctions, has already cost Venezuela $30 billion over the past year-and-a-half.

Venezuela began selling off some of its foreign reserves, including gold, starting in 2016, amid sanctions and financial restrictions which a recent study estimated to have robbed the government of up to $350 billion in revenue over the past five years.

About two thirds of the country’s remaining $8.8 billion in foreign reserves are held in gold, with reserves falling from over 350 tonnes in 2016 to about 165 tonnes by late 2018.

The long-running political and economic crisis in Venezuela escalated last month after Guaido proclaimed himself interim president, in a move Caracas has described as an attempted coup d’etat. The US and dozens of its European and Latin American allies have pledged their support for Guaido, while Russia, China, Cuba, Bolivia, Nicaragua, Iran, Syria, Turkey and other states voiced their support for the democratically elected government and urged outside powers not to meddle in Venezuela’s affairs.