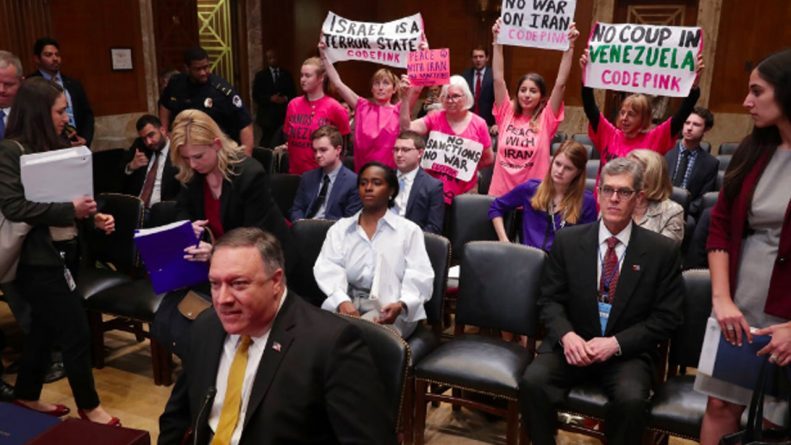 Sec. of State Mike Pompeo recently openly admitted that the sanctions are causing pain and suffering and that this would accelerate the process of toppling the Maduro government. Mark Weisbrot discusses the approach and what Democrats and progressives could do to stop this.

Joining me to continue our discussion of U.S. policy towards Venezuela, and what is happening in Congress in this regard, is Mark Weisbrot, codirector of the Center for Economic and Policy Research. Thanks for joining us again, Mark.

GREG WILPERT: So in our first segment, we talked about Senators Robert Menendez and Marco Rubio’s latest efforts to bring about regime or government change in Venezuela. Other hawks who are pursuing the same are National Security Advisor John Bolton and Secretary of State Mike Pompeo. Here’s what Mike Pompeo had to say about Venezuela, quite revealingly, last month.

MATTHEW LEE: Are you satisfied with the pace of the momentum behind Guaido and his leadership?

MIKE POMPEO: Well, we wish things could go faster, but I’m very confident that the tide is moving in the direction of the Venezuelan people and will continue to do so. It doesn’t take much for you to see what’s really going on there. The circle is tightening, the humanitarian crisis is increasing by the hour. I talked with our senior person on the ground there in Venezuela last night, at 7:00 or 8:00 last night. You can see the increasing pain and suffering that the Venezuelan people are suffering from.

GREG WILPERT: “The humanitarian crisis is increasing by the hour.” He doesn’t link this glee about the situation to the sanctions directly, but it seems to be implied. Now, shouldn’t the Trump administration, or Trump administration officials such as Pompeo, be held accountable for intentionally pursuing a policy that causes increasing pain and suffering among the general population of a country such as Venezuela?

MARK WEISBROT: Yeah, it’s pretty outrageous. It’s amazing that nobody noticed that, because it’s very clear that’s what he’s saying. That was Matt Lee from the Associated Press that asked that question. He’s one of the reporters that has most gone after the administration in these kinds of press briefings and asked those kinds of questions. And you can see, he’s basically admitting that this is what we’re doing, we’re going to make people suffer until we get rid of this government. We’re going to make it intolerable, we’re going to kill a lot of people. And so, this is really, really what they’re doing. And I think it’s something that everybody should know by now.

And of course, the idea of just providing some little bit of humanitarian aid, which is completely politicized–which they admitted before it was completely politicized and they politicized it even more in this latest bill in the Senate–that doesn’t do anything for the billions of dollars that they’re cutting off. Let’s just look at oil revenue. Oil revenue for 2019 is projected to fall about 67 percent from its current level. That means just cutting off the vast majority of the remaining imports that they have. That means food, that means medicine, that means medical equipment, that means everything you need to keep hospitals running. So that’s really what they’re doing. And that’s what he’s saying. When the humanitarian crisis is getting worse, they’re saying we’re going to make it worse.

GREG WILPERT: Now, we discussed in the first segment, actually, other bills that are currently in the works that are focused mainly on preventing military intervention. Now, just summarize again for us what these are and what are their chances of passing, which are being sponsored basically by Democrats? But given the constellation of forces, what do you think the chances are that these might actually pass?

MARK WEISBROT: Well, I think the House bill, the Cicilline bill that’s from Representative Cicilline of Rhode Island, which basically just states what the Constitution and the 1973 War Powers Resolution says, which there can be no military action without the consent of Congress, I think that has a chance. It’s got 62 cosponsors right now, and I think that definitely has a chance. When it will pass, we don’t really know. But you have to remember, when the war powers resolution in the Congress was first proposed, I think it was like a year and a half ago, couldn’t get it through the house and you didn’t have the votes in the Senate. There were various procedural moves that were used to prevent it, an then they didn’t pass.

And I think the problem here is a lot of it is just the lack of awareness of what the United States is doing to people in Venezuela. There’s another 1.9 million refugees are predicted to leave Venezuela this year because of the worsening crisis and because of what they’re doing. So I think that a lot of it just depends on what people do. I mean, the War Powers Resolution passed both Houses because you had thousands of people all over the country who pressured their members of Congress and their senators to vote for it. You get enough people to do that, I think these could pass as well. But it’s still only the first step, because the military option, as you noted, is not all that likely. It’s really the sanctions that are strangling the country and killing people on a daily basis. And so, that has to be the next step.

GREG WILPERT: Yeah. I wanted to get into that possibility of a military intervention a little bit more. I mean, Vice President Mike Pence just visited Brazil on Monday and met with President Bolsonaro’s Foreign Minister, General Hamilton Mourao. And after the meeting, Mourao stated that there will be no military intervention in Venezuela on the part of Brazil. I thought that was quite remarkable that he said this right after the meeting. Now, given that there seems to be a growing regional consensus, at least, on this issue of no military intervention, I’m wondering if people shouldn’t be more concerned, especially among Democrats in Congress, about the effects of sanctions on the people of Venezuela. And I’m wondering to what extent is it really ignorance or indifference?

And that is, the U.S. has a history of imposing sanctions on countries that have been very devastating. I’m thinking particularly the sanctions against Iraq before the Iraq war that are said to have killed 500,000 children. And then, of course, the sanctions against Iran are also causing great harm and suffering in that country, and they were just intensified with the declaration of the Revolutionary Guard being considered a terrorist organization, which means that it’s almost forcing Europeans to participate in those sanctions. Now, I’m wondering, again, to what extent do you think is it really ignorance or is it indifference, and shouldn’t this be really the next step in terms of making sure that the people of Venezuela don’t suffer from the foreign policy of the Trump administration?

MARK WEISBROT: Yes. I think it’s a combination of ignorance and indifference, and of course, the Florida politics as well. So you have different motivations in different cases. But I’m quite sure that people don’t realize how this works, again, when they recognize Guaido, or what they’re actually doing. So for example, if you look at what they’re doing with the international financial system–and this is how sanctions are such a powerful weapon and become, I think, a more powerful and in a lot of ways more deadly weapon than the military for the United States right now in international relations. What they actually do–first of all, in the case of Venezuela, you’re starting with an economy that was already quite vulnerable. It had a deep recession for three years before the August 2017 sanctions, which created a financial embargo, and they were on the brink of hyperinflation and then it pushed them into hyperinflation.

So that is really damaging, and it also prevents them from taking any measures that they would need to get out of the recession and hyperinflation. So that’s part of what they’re doing. But then, what they can do, because they have so much power in the international financial system–which most of it is dollar based and depends on a system of what is called correspondent banks. So in other words, for any country or any financial institution of any country in world, they don’t have branches everywhere, so they have to use other banks in order to make payments. So what the U.S. has done is cut off Venezuela from various correspondent banks around the world, and then pressure even those outside the financial system of the United States or its allies here–that is European allies–it’s used pressure to force other countries.

So for example, Gazprom in Russia, even though it’s majority owned by the Russian government, actually cut off the accounts of the state oil company in Venezuela under pressure from the United States. Because they can sanction that institution, and then that institution is basically incapable of doing most of what it would normally do in terms of business. And that’s what they’re doing around the world. And this bill from Menendez basically is trying to get the State Department to get more of this cooperation from Latin America and Europe to–again, you have to remember, this actually prevents Venezuela from even using the revenue that they have to buy medicine and food. There was a shipment from the United Nations that was going to go to Venezuela, and they couldn’t pay for it, because of this being prevented from using the international payment system.

So yeah, these sanctions are really deadly, and they can destroy any economy. And of course, they were much more effective here in Venezuela because of the already weakened state of the economy and because they can perpetuate this and worsen it by the day.

GREG WILPERT: Well, we’re going to have to leave it there for now. I just want to note though, and you’ve said this yourself many times Mark, that the sanctions, of course, are totally illegal under international law and the OAS charter, and one could even say that they’re illegal under U.S. law. But we don’t have time to get into that, maybe next time. I was speaking to Mark Weisbrot, codirector of the Center for Economic and Policy Research. Thanks again, Mark, for having joined us today.