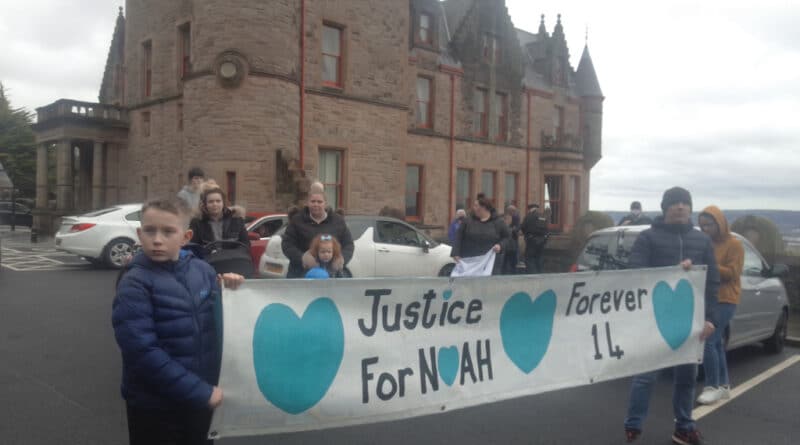 Sunday, March 28, 2021 was week forty in Fiona Donohoe’s search for truth and justice into the disappearance and death of her beloved son Noah on Sunday, June 21 2020.

The longest day of the year was transformed into her longest nightmare. The dark night of the soul when Fiona lost her only child.

No parent ever wants to lose a child. Regardless of their age, circumstances and passing. It is a tragedy that many may never recover from. Fiona more than most has cause for her sorrow. The circumstances of Noah’s death are still unclear with many unanswered questions.

The Police investigation seems incomplete, has answered very few questions around Noah’s disappearance and indeed has raised more questions than they seemed to have resolved.

All through this tragedy of not knowing, Fiona has been supported by her loving sister Niamh. Two powerful courageous and resilient women at the forefront of the fight for truth and justice for Noah.

Noah disappeared one warm bright summer evening on his way to Belfast Castle.

After exhaustive searches by the local populace failed to find any trace of Noah, he was subsequently found dead in a storm drain several hundred meters from where Police believe he may have entered the tunnel.

Why he did this no one seems to know. His personal items and clothing were discovered scattered here and there and some were missing. They were later found in the possession of a local person who was subsequently brought before the courts in connection with theft.

Conjecture by the Police and others are not facts and little eyewitness testimony has so far come to light.

The family of Noah Donohoe are not satisfied by the Police response and have led a campaign for full transparency into the policing inquiry and the circumstances surrounding Noah’s disappearance and death. Their grief has touched nearly every corner of the country and further afield.

After the public searches for Noah and a car cavalcade for justice, this Sunday saw a white line picket from Belfast City Hall to Belfast Castle. Retracing a part of Noah’s last journey on the day he disappeared. People gathered in the centre of the road to highlight this campaign, stretching several miles.

Fiona and Niamh and their family walked symbolically from Belfast City Hall to Belfast Castle. They thanked each person, man, woman and child who lined the route. Many cars traversed the route beeping horns, handing out bottles of water and encouragement to those who marked the way.

I met Niamh during the search for Noah on a Wednesday morning after he disappeared. I was again able to chat briefly with her on Sunday when the assembled walkers gathered at Belfast Castle. I have found Niamh and Fiona to be two beautiful people whose gratitude to all those seeking justice for Noah stands in the deepest of contrasts to the policing failures on display in this case.

The strength and dignity of these two remarkable women are exemplified in how they coped with their grief and loss while maintaining the campaign. Their genuine warmth towards all they meet and their compassion for others shines through.

Noah’s anniversary is only twelve short weeks away. I hope and pray they get the answers we all seek.

I stand with Noah, Fiona and Niamh.

I stand with Noah’s Army. The public face of solidarity for the private heartache the family continue to endure.

I demand the police become fully transparent and honest in their dealings with the Donohoe family, the campaign and the rest of us.

I see the total lack of political support from the Justice Minister to be appalling and lacking in empathy, solidarity or compassion.

When elected ministers and politicians turn their back on those crying out for Justice I shudder to think where we are going as a society.

No Justice, No Peace, We want truth and full disclosure from the Police.