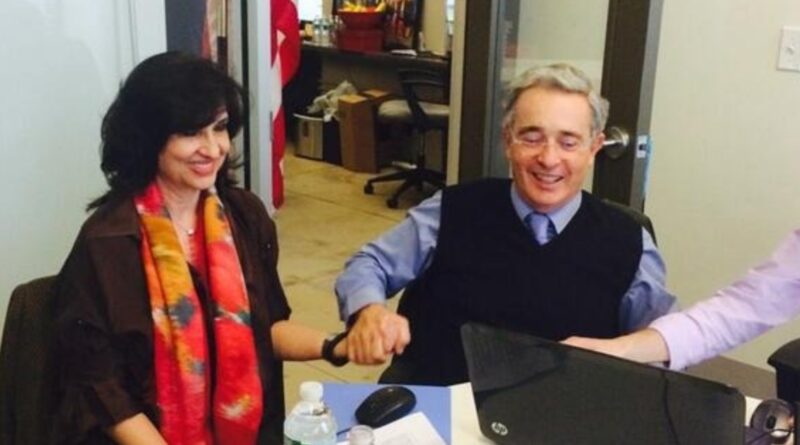 This Tuesday, April 6, Venezuelan Foreign Affairs Minister Jorge Arreaza said that he was willing to meet with the Colombian Foreign Minister, Claudia Blum. He intimated that if she wants to “talk to me, make a call and if you want, we’ll meet wherever you want, to ensure peace and tranquility to both our peoples. We will continue to be committed to peace,” said the Venezuelan Foreign Minister during a press conference.

In his statements, Arreaza stated that Colombia is a failed state, after referring to the armed conflict in Apure. Venezuelan authorities have denounced how Colombian narco paramilitary gangs enter Venezuela to try to set up bases. Venezuelan authorities expel them and then they run to the Colombian side of the border where there is no authority to put an end to their illegal activities, with most of them being connected to drug trafficking.

“Colombia is a failed state from every point of view. The helplessness along the border is almost absolute. That is why President Nicolás Maduro has instructed us to inform the country of what the truth is and how the Venezuelan people suffer the consequences of a conflict that is not ours,” he said.

The Venezuelan Foreign Affairs Minister said further, that it is difficult to be a neighbor of Colombia, since that country concentrates “the greatest number of conflicts, distortions and problems, and we have a long border to share, one of the most dynamic in the region.”

The Venezuelan Minister for Defense, Vladimir Padrino Lopez, has denounced the fact that they have tried to open channels for dialogue and coordination with Colombian authorities, but that those calls have not been answered. That is why Venezuelan authorities believe that recent clashes between Venezuelan Army troops and Colombian paramilitary gangs in Apure state, along with a social media and mainstream media campaign around these clashes trying to twist reality and present the victim as the aggressor. It is part of a coordinated action to open a new flank of destabilization against Venezuelan Chavismo.

However, Arreaza—in the name of peace between the two countries—said he was willing to meet with the Colombian Foreign Minister, Claudia Blum.

The top Venezuelan diplomat also stated that he has asked António Guterres to establish a channel between the armies of Colombia and Venezuela to attack the Colombian narco paramilitary gangs. He also asked that “the UN assist in the deactivation of landmines planted by this criminal groups, so that a child or peasant won’t become a victim.”

Additionally, Arreaza also stated that Venezuela will request Mexico and CELAC to facilitate the opening of a minimum coordination dialogue, as mediators, in order to solve the issue with Colombian narco paramilitary gangs, which is threatening the life of thousands of Venezuelans.

“We have made a formal request for a respectful call to be made by the UN to Colombian authorities to open a channel of communication to coordinate binational issues between the authorities to solve border problems, as established in the UN Charter,” the chancellor stressed.