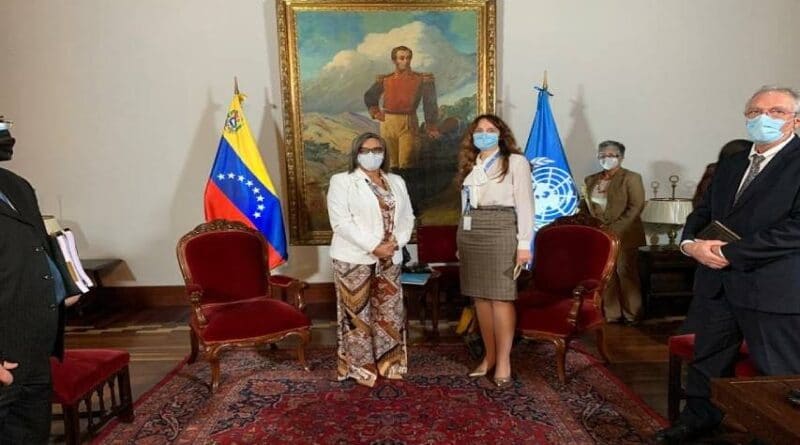 This Tuesday, February 9, 2021, the United Nations (UN) Special Rapporteur on the impact of Sanctions on Human Rights, Alena Douhan, continued her agenda in Venezuela to assess the effects of the United States sanctions and blockade.

Douhan held a meeting on Monday with the president of the National Electoral Council (CNE), Indira Alfonzo, as part of the program of private meetings with representatives of various sectors of Venezuelan society.

Prensa Latina reported that, during the exchange, the head of Venezuela’s highest electoral body and the UN expert analyzed the impact of the asphyxiating economic actions undertaken by the United States on the enjoyment of fundamental human rights such as identity, political participation and voting on the Venezuelan population.

Alena Douhan arrived in Venezuela on January 30 for an official visit that will last until February 12, when she plans to hold a press conference to report on the issues addressed in her agenda.

Before her arrival in the South American nation, the special rapporteur expressed her willingness to examine, “in a spirit of cooperation and dialogue,” whether the adoption of US and European sanctions hinders the enjoyment of human rights by the Venezuelan people.

“I will focus in particular on any negative impacts that sanctions may have on the enjoyment of all human rights in Venezuela,” the official said in a UN press release, reviewed by the Venezuelan Foreign Affairs Ministry.

In recent years, the Venezuelan State and civil organizations have denounced the effects created in the economic and social spheres by the punitive actions of the United States government. Venezuela has filed a formal complaint with the International Criminal Court against the government of the United States.

According to official figures, since 2015, the policy of blocking exports and the financial persecution has caused Venezuela to lose 99 percent of its foreign exchange earnings, in addition to preventing the country’s access to international markets, medicines, food and spare parts, among others.

Featured image: Special UN Rapporteur on the impact of Sanctions on Human Rights, Alena Douhan met with the president of the CNE, Indira Alfonzo.