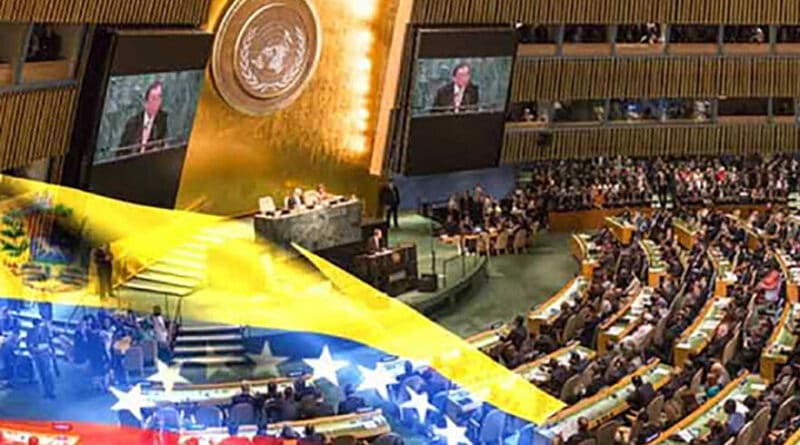 The United Nations Human Rights Council issued a report* by the Independent Mission to Determine the Facts in Venezuela (Independent Mission), which accuses Venezuela of “cruel, inhuman or degrading treatment committed since 2014.” The veracity, timing, and political intent of this report is best understood in the context of a campaign led by the U.S. to overthrow Venezuela’s democratically elected government of President Nicolás Maduro and before him of Hugo Chávez.

Venezuela is a historically petroleum exporting nation and has consequently suffered from the crash in the international oil prices starting in 2014. Since this spring, Venezuela along with the rest of humanity has been hit by the additional stressor of the COVID-19 pandemic. Taking advantage of these externally induced vulnerabilities, the two-decades-long campaign by the U.S. and its allies of low-intensity war has only intensified under U.S. President Trump’s “maximum pressure” hybrid war operation.

RELATED CONTENT: Task Force on the Americas Statement Regarding UN Report on Venezuela

The Independent Mission report was created and is being used to delegitimize the Venezuelan government. Issued on September 16, the timing comes when Venezuela is planning parliamentary elections on December 6. The European Union (EU) had been invited to observe the elections by the Venezuelan government but has used the report to refuse the offer. Instead, the EU along with the U.S. has called for a boycott of the elections in direct interference with the internal affairs of a sovereign country. Likewise, Secretary General of the Washington-based Organization of American States (OAS), Luis Almagro, used the report as an excuse to deny the legitimacy of the elections even before they are held.

All this is concert with the U.S. government’s long-term effort at regime change in Venezuela, which has set bounties on the heads of top elected Venezuelan officials while selecting Juan Guaidó as the unelected president of the country. U.S. Secretary of Defense Pompeo recently toured Latin America to discuss military intervention in Venezuela by hostile countries. New U.S. troops have been sent to Colombia on Venezuela’s western border. On the eastern border, the U.S. is conducting joint military patrols with Guyana.

Inside Venezuela, mercenaries based in Colombia staged an incursion of the Venezuelan coast in May. More recently, heavily armed U.S. mercenary Matthew John Heath was captured before he could sabotage Venezuelan power facilities.

Meanwhile, the U.S. Fourth Fleet patrols and threatens Venezuela’s Caribbean coast, and the US has permanent land military bases surrounding Venezuela in Colombia, Aruba, and Curacao. This is in addition to a multi-national U.S.-led naval armada deployed this spring under the ruse of interdicting drugs.

Over-arching all military threats are punishing U.S. and EU sanctions – unilateral coercive measures, illegal under U.S., OAS, and international law – causing great suffering in Venezuela. There is a humanitarian crisis in Venezuela. But it is not due to human rights violations by the elected government. The Independent Mission human rights report blames the victim for the intended consequences of U.S. imperialist blockade and other forms of warfare against the people of Venezuela.

The U.S. Peace Council strongly condemns the imperialists, politically biased and motivated Independent Mission report and calls for ending of all unilateral coercive measures by the U.S. and its allies, ceasing the U.S. blockade, and respecting the sovereignty of the Bolivarian Republic of Venezuela.