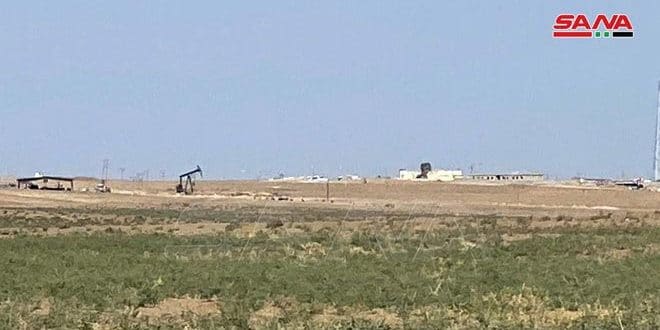 Hasaka, SANA – The US occupation forces and the separatist QSD militia installed an oil refinery in Rmelan fields in Hasaka north eastern, in parallel with stealing dozens of tankers laden with oil and transferring them to Iraqi territories.

A source at Directorate of Rmelan fields told SANA that the oil refinery has a capacity to refine 3,000 barrels per day.

The source added that in  the upcoming weeks and months will witness a large increase in stealing and looting the Syrian oil from al-Jazeera region by the US occupation and the QSD militia after installing the refinery.

In the same context, local sources said that the US occupation forces brought out on Saturday evening a convoy of 79 vehicles, including tankers loaded with stolen Syrian oil, refrigerators, and a number of trucks, accompanied by four military vehicles, heading to the northern Iraq via the illegal crossings.