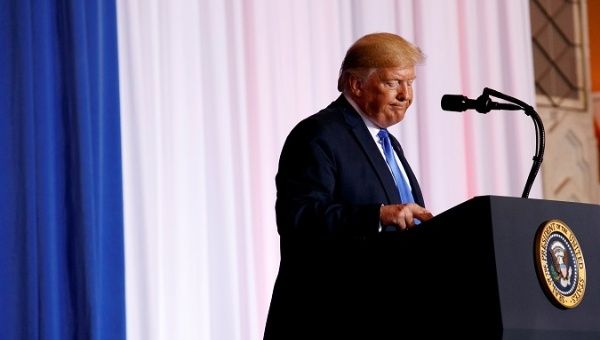 In a tactit reference to an eventual U.S. military action against Venezuela, President Donald Trump said Saturday that he does not want to get too involved in the Latin American country, although he also held that his tactics could “change at any time.”

In a press conference held at the G20 Summit in Osaka, Japan, Trump confessed that he had spoken about Venezuela “with almost every leader” with whom he met this week.

Asked whether it was time to reconsider his strategy towards the Bolivarian revolution, which he’s been incapable of overthrowing, Trump announced that he had five different strategies.

“We have a lot things in store… we don’t want to get involved to the extent you may be thinking, but we have a lot of alternatives, we have five different alternatives for Venezuela. We’ll see what happens.”

According to media reports, Trump talked about Venezuela during his G20 bilateral meetings with Russian President Vladimir Putin and Brazil’s President Jair Bolsonaro.

RT if you agree with our party leader @JeremyCorbyn: dialogue is the way forward for Venezuela, not aggression and threats from Trump and co.

If you also reject war on Venezuela, sign this statement:https://t.co/Qjk1Xbvi0i pic.twitter.com/XxVMLgPshj

Five months ago, the Trump administration recognized opposition leader and self-proclaimed ‘president’ Juan Guaido.. Such recognition, however, has been politically and diplomatically ineffective as Maduro continues to exercise his functions as constitutional president.

Later, Guaido sought to precipitate a U.S. military intervention while attempting a coup d’état on April 30. Like other previous destabilization efforts, this action collapsed, although it had been backed by the Trump’s regional allies from the Lima Group, which is led by the right-wing presidents of Argentina, Brazil, Chile, Colombia, Costa Rica, Guatemala, Honduras, Panama, Paraguay and Peru.

Within what seems to be a non-officially declared war against Venezuela, which started at least a decade ago, the U.S. has also being deploying several waves of economic sanctions which have killed over 40,000 Venezuelans since 2017, according to the research led by Jeffrey Sachs, the former director of the Harvard Institute for International Development.

Among those sanctions are the blockade of financial assets that the Bolivarian Revolution kept in banks abroad and impediments to the sale of Venezuelan oil in international markets.