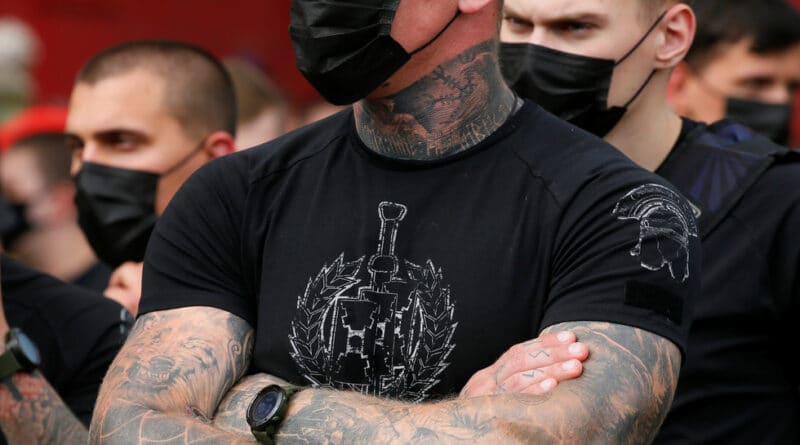 December 16, 2020-  A Russian resolution condemning the “glorification of Nazism” was passed by the UN General Assembly on Wednesday with overwhelming support although, remarkably, both the US and Ukraine made a point of voting against the motion.

Equally noteworthy was the fact that all delegations from European Union member states, including Germany, abstained from the vote, with the United Kingdom following suit.

Many other European countries—such as Serbia, Moldova and Bosnia—supported the motion, as did Israel.

The UN General Assembly adopted the Russian draft resolution on “combating glorification of Nazism, neo-Nazism and other practices that contribute to fuelling contemporary forms of racism, racial discrimination, xenophobia and related intolerance” as part of its 75th General Assembly.

The resolution called on member states to pass legislation to “eliminate all forms of racial discrimination,” and condemned the “glorification, in any form, of the Nazi movement, neo-Nazism and former members of the Waffen SS organization,” as well as “revisionism in respect to the Second World War.”

In an era of high tension between Russia and the West, the resolution seemed like something all sides could agree on. After all, the Soviet Union, Great Britain, and the United States worked together to defeat Nazi Germany. The defeat of the Nazis is still celebrated in Russia with a victory parade every year, while the mere hint of sympathy for the Third Reich once could end political careers in the US and UK.

Even so, the US was one of only two countries to vote against the resolution, along with Ukraine, while 51 countries—among them EU member states—abstained. Even Germany, which Chancellor Angela Merkel once said bears “everlasting responsibility” for Nazi atrocities, sat out the vote.

RELATED CONTENT: On the 75th Anniversary of the Victory Over Nazi-Fascismo

For Ukraine, the resolution was likely seen as a political barb. Neo-Nazi groups are well represented in Ukrainian politics, and some have been accused of war crimes and torture during the civil war in the country’s South East. At least one of these outfits, the Azov Battalion, has been armed with American weaponry.

However, the US maintains that its opposition to the Russian resolution has nothing to do with its support for Ukrainian neo-Nazi groups. Russian officials introduce the same resolution every year, and the US has opposed it every time, arguing that forbidding the “glorification of Nazism” clashes with its First Amendment protection of free speech.

A month before the vote, the US mission to the UN said that, while Nazism is “widely scorned by the American people, even avowed Nazis” are protected by the First Amendment. Washington’s diplomats also accused Russia of using the resolution to lend weight to its “disinformation narratives” about neo-Nazism in its neighboring nations.