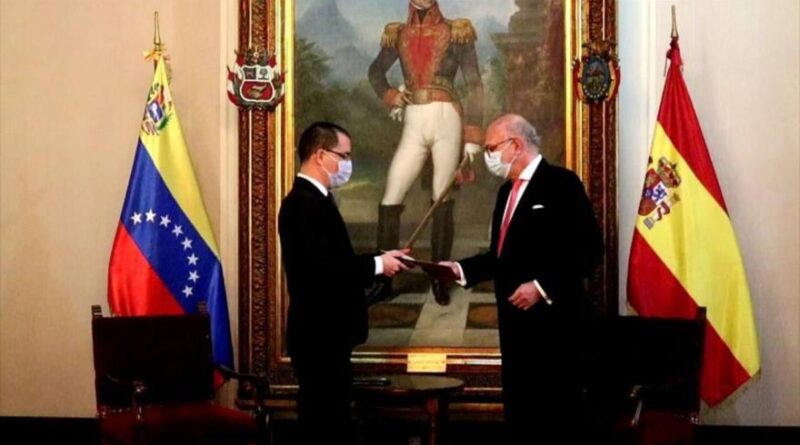 The authorities of Venezuela and Spain agreed to move towards a new stage in their relations and strengthen their bilateral cooperation.

Venezuela’s Foreign Affairs Ministry, in a message published this Tuesday on Twitter, reported on the meeting between the Minister of Foreign Affairs of Venezuela, Jorge Arreaza, and the new chargé d’affaires of Spain in the Caribbean country, Juan Fernández Trigo, in an official ceremony to receive the accreditation of the recently appointed diplomat, in order to strengthen ties and the collaborations between the two nations.

It is important to note that Spain had announced, following the impasse caused by the escape of Leopoldo López from the Spanish ambassador’s residence in Caracas and his flight to Spain, where he was received personally by Spanish President Carlos Sanchez just a few hours after his arrival, that they were not going to appoint a new ambassador to Venezuela. It was previously announced that Spain was going to reduce the bilateral relations to the level of a chargé d’affairs.

RELATED CONTENT: “López Should be Required Not to Use Spain to Plot more Coups Against Venezuela”

Many analyst saw the move as new evidence of an arrogant European supremacist position towards a region they still consider part of their kingdom. “It is outrageous that the country hosting a criminal and helping him escape Venezuelan justice, and then organizing a meeting with Carlos Sanchez, decided to lower the tone of the bilateral relations,” a diplomatic source stated to Orinoco Tribune. “It was Venezuela that could have acted in this way, taking into consideration all the Spanish violations to the Vienna Convention.”

“We spoke about the times we are living in, the pressures that have been generated… and the need to strengthen our cooperation and move towards a new stage in the relationship with the kingdom of Spain,” said the head of Venezuelan diplomacy from the headquarters of the Foreign Ministry in Caracas, the capital.

Fernandez-Trigo, for his part, has indicated that he is interested in “speaking with all Venezuelans” and that his actions will be framed by “respect, an attempt to be objective and with absolute respect for the Vienna Convention” in terms of diplomatic relations.

Along the same lines, the Spanish official has assured that “from the first minute of the exercise” of his function he will try to “be useful” to the extent possible to help overcome the difficulties that affect the Venezuelan people, without mentioning that many of these difficulties are the direct result of US and European interference in Venezuela’s internal affairs.

On October 25, the Venezuelan opposition leader Leopoldo López traveled to Madrid, the Spanish capital after spending 28 months as a “guest” at the Spanish embassy in Caracas. After the incident, the Venezuelan government accused the Jesús Silva, Spanish ambassador at the time, of being López’s “accomplice.” Fernández Trigo has been assigned to as chargé d’affaires of Spain in the Bolivarian Republic following the departure of Jesús Silva.

Lopez is considered a mentor of the coup plotter Juan Guaidó, who proclaimed himself  president in charge” of Venezuela in January 2019 in an attempt to force the departure of the legitimate president of the country, Nicolás Maduro.

Since then, the Venezuelan opposition, with the complicity of the Government of the United States and Colombia, has resorted to different strategies to eliminate the Venezuelan head of state. In Spain, political parties such as the Republican Left of Catalonia (ERC), Bildu and Unidos Podemos have opposed Spain’s recognition— following Washington’s dictates—of Guaidó as the “president in charge” of Venezuela.