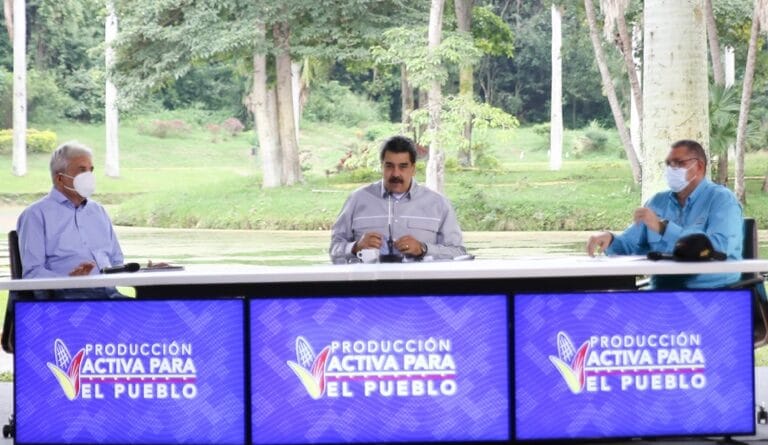 “PDVSA is not bankrupt, it is attacked, blocked, besieged. PDVSA is ready to produce two and a half million barrels of oil per day,” said President Nicolás Maduro during a televised working meeting discussing the production and distribution of food for the Venezuelan people.

He recalled that between October 2019 and 2020 Venezuela did not earn a single dollar from the sale of oil.

The president explained that PDVSA has been affected by the persecution of the oil industry by the opposition and the North American empire attempting to break the revolutionary government. “You are broke as demagogues, as politicians and leaders,” Maduro excoriated. “Instead the working class is ready to recover oil production,”

He pointed out that the opposition candidates intend to take advantage of the situation despite knowing how the country has been attacked through unilateral coercive actions promoted by the United States government. “I’m outraged that the opposition is seeking votes from the suffering of the people,” said Maduro. “Those pitiful speeches offend the dignity of the people, who are in resistance.”

Feeding day
The working meeting was convened to celebrate Venezuela’s Food Day that, according to the president, was approved in the 1950s by a presidential decree. He added that, starting next year, March 12 will be Food Day in Venezuela as it’s the birth day of the CLAP program.

The CLAP programs provide one box of food—at almost no cost—to about seven million households across Venezuela each month. CLAP was launched by President Maduro in 2016 during the peak of the economic warfare that preceded the strengthening of US sanctions against Venezuelans.

He recalled that before the blockade, the CLAP boxes contained twenty-four products that were imported to combat the economic war and that, through the Anti-Blockade Law, Venezuela is heading towards the production of its own foodstuffs that will continue to reach the people through CLAP. He also recalled that it was the US sanctions that blocked the import of many food items that had been purchased from Mexico.