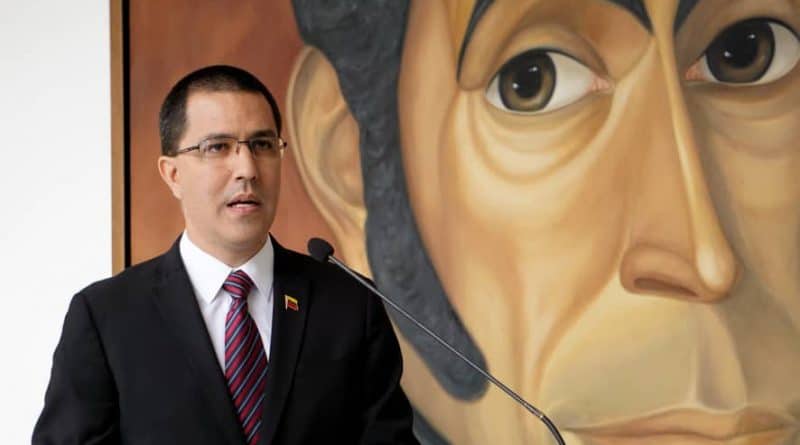 The Foreign Minister of the Bolivarian Republic of Venezuela, Jorge Arreaza, read a statement on Friday expressing the concern of the government of Venezuela on the decision of a group of the Revolutionary Armed Forces of Colombia (FARC) to return to arms. The statement criticizes Iván Duque, president of Colombia, for his “arbitrary decisions” that “openly mocked” the commitments of the peace agreement, “protecting different forms of systematic violation of human rights, including hundreds of selective killings of former combatants and social leaders”. It also calls for “exhausting all efforts to avoid further suffering of the civilian population.”

The Government of the Bolivarian Republic of Venezuela follows with deep concern the recent events in the Republic of Colombia that demonstrate the imminent reactivation of the armed conflict between the government of that country and a group of the Revolutionary Armed Forces of Colombia (FARC), giving thus, to the end of the peace process in Havana, in which so many efforts and hopes were deposited by Colombian society and the international community.

Public and notorious are the calculated and arbitrary decisions taken by Iván Duque that resulted in inconceivable institutional maneuvers that, far from generating trust and legal certainty in the Peace Agreement, motivated the denial of the necessary guarantees agreed, openly mocking the commitments acquired and protecting different forms of systematic violation of human rights, including hundreds of selective murders of former combatants and social leaders.

In this regard, it is unusual that Iván Duque, with absolute carelessness, in a despicable act, intends to move his exclusive responsibility towards third countries and third parties, in the planned dismantling of the peace process and the breach of the commitments assumed and signed by the Colombian state before the world and its people. It is necessary to note that this attitude, not only jeopardizes the normalization of public life in Colombia, but threatens regional peace and security in South America.

The Bolivarian Government of Venezuela urges the actors who led the peace agreements to exhaust all efforts to avoid further suffering of the civilian population. In that sense, Venezuela is in consultation with the rest of the accompanying countries and guarantors of the peace process to draw up immediate strategies that allow the reestablishment of contacts between the parties.

The Bolivarian Republic of Venezuela will always be at the service of the people of Colombia to cooperate in the immense challenge of generating the conditions that allow achieving the real and lasting peace that Colombian society deserves and desires, after decades of bloodshed, violence and pain.