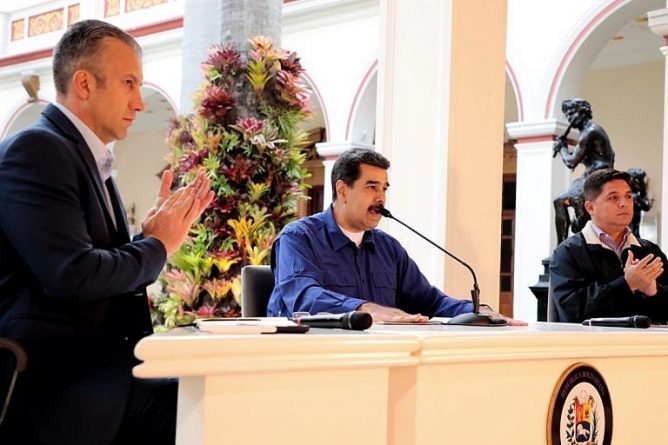 The Venezuelan president, Nicolás Maduro, demanded respect respect from the government of the United States (USA) before the threats of military intervention against the nation, evidenced in his declarations offered in the Security Council of the United Nations (UN) . “Venezuela is a country that demands respect from the vice president of the United States of America and the imperialist government of Donald Trump. We demand respect for our history, our Constitution, respect for our democracy. They have tried to impose a change of regime in Venezuela, they threaten Venezuela with a military invasion,” said the head of state in joint radio and television broadcast from the Miraflores Palace in Caracas.

In this regard, the National President described as “ridiculous” Pence’s statements in the UN Security Council – held on Tuesday – where he said that if the Bolivarian Government continues in power “the chaos and suffering will spread” throughout the region, so – on behalf of the US – requested the UN “to live up to its purposes and join all the countries of the hemisphere in helping Venezuela to seek a better future.”

In this regard, President Nicolás Maduro emphasized that the government presided over by Donald Trump wants to impose his puppets in Venezuela, however, he reminded him that – according to the Constitution – it is the people who elect their president, an action that was taken to held on March 20 of last year, in which more than 67% re-elected Nicolás Maduro as president of the nation for the period 2019-2025.

“They think they’re superior to Latin Americans, and they think they can give orders. They believe in the rule that rules, that rules, that takes away, that puts. In Venezuela, the president of the Republic is not placed by the US government. It is chosen by the people in free, democratic elections. You see the hatred, the racism, the contempt with which he refers to Venezuela. Mr. Pence, there is a people here, ” he said. During his speech, Maduro said that the US will face the same people that defeated the coup d’état, planned from the North American nation 17 years ago, against the then President Hugo Chávez.

“Just like 17 years ago, we defeated the coup d’état that his empire tried against Comandante Chávez. Today, the Venezuelan people will continue to defeat the continued blow, permanent blow and desire you have for a regime change in Venezuela. In Venezuela, the Constitution mandates, commands the people and will continue to do so because of the conscience and will of the great majority,” he stressed.

He pointed out that these people have demonstrated their strength in the face of the constant onslaught of the US government, as evidenced by the recent attacks on the National Electric System (SEN) in March, which left several states in the country with no power supply or pumping water.

“We are in the middle of an electrical war, recognized by the world. They have made cyber war against us, and have contrived every day this week to damage the electrical system in the country, to take the light from the people. We are going to be victorious in this battle of this electric war, there is no excuse, we are made of a spirit, of a moral strength that the imperialist of the North can not understand nor will ever understand. Our greatest revenge against US imperialism is to work for the happiness of a people, the care, the protection of our people,” he said.