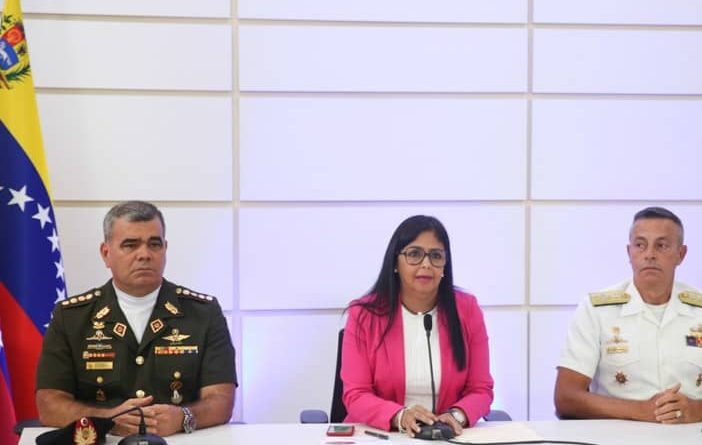 Venezuelan Government requested the Public Ministry (MP) to undertake an exhaustive investigation against the deputy of the National Assembly in contempt, Juan Guaidó, who is said to be allegedly involved in plans to deliver the Essequibo to Guyana. The request was made by the executive vice president, Delcy Rodríguez, who at the press conference showed an audio in which Vanessa Neumann, Guaido’s “ambassador” in the UK, and Manuel Avendaño, Guaidó’s advisor, confess that, in order to extend support to the alleged interim president, they have to put aside Venezuela’s claim over Essequibo territory.

In part of the conversation with Avendaño, Neumann says, “The number one issue that has been identified by the Foreign Commonwealth & Office (Ministry of Foreign Affairs and the Commonwealth of Nations of Great Britain) is that they will not support us as long as we continue with the official line that we want to regain the Essequibo territory from Guyana”.

“I told María Teresa Belandria (a person who was appointed by Juan Guaidó as the alleged Venezuelan ambassador to Brazil) not to advise anyone to comment on Guyana. This was before Juan came to power,” said Neumann. “My first meeting with the Lima Group was also with the High Commissioner of Guyana, who came and told me that he wanted to know what Juan Guaidó’s position was regarding Guyana. ‘Drop the issue’ is my line.”

Rodríguez explained that in the call they admit that “they will change the position of Venezuela to lift the claim over the Essequibo territory to Exxon Mobil and other transnational companies, denying the legitimate rights that Venezuela has over this territory, and over which there is a dispute that was settled under the 1966 Geneva Agreement.”

In her opinion, the organization led by Juan Guaidó “not only works to fulfill transnational interests, but also for his personal enrichment.” She also recalled the previous denunciation of the Venezuelan Government when the Crystallex case was presented, in which Guaidó had appointed an attorney who handed over the interests of Venezuela to foreign companies.

“It is a criminal organization that did not start on January 10 (but) had previously planned its crime,” she said based on Neumann’s words. “It is very evident that the Guaidó project is planned by the United States government to commit crimes,” Rodríguez said.

During her remarks, the vice president emphasized that the leader’s illicit alliance had the starting point of taking over Citgo, the subsidiary of Petróleos de Venezuela (PDVSA), in the United States. The organization also seeks to “seize the assets” of the country and “harm the Venezuelan people.”