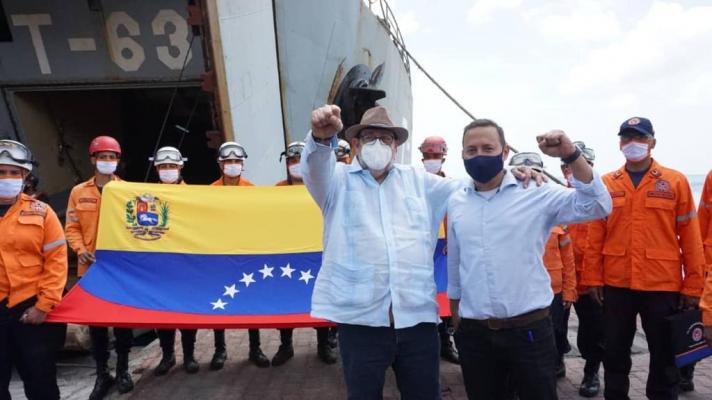 Since Friday, April 9, the population of Saint Vincent and the Grenadines is under high risk due to the volcanic activity of La Soufrière, a volcano that had been inactive for the last 30 years.

The first eruption produced a huge column of ash and forced the authorities to evacuate 20,000 people from the affected areas. The sulfuric ash cloud is already over the Mediterranean sea, affecting the south of Europe and northern Africa.

On Monday, April 12, another explosion of the volcano was recorded, with a column of smoke reaching 17 kilometers high, leaving much of the Caribbean island engulfed in ash and affecting part of Barbados.

The Government of Venezuela sent 20 tons of humanitarian aid to Saint Vincent and the Grenadines this week, which includes water, food, mattresses, sheets, and personal hygiene packages, in addition to 68 doctors and experts in natural disasters, including 15 officials of the Simón Bolívar Humanitarian Task Force. The Prime Minister of the Caribbean country, Ralph Gonsalves, publicly thanked Venezuela for the supplies, equipment, and professionals who arrived in his territory.

Our brothers and sisters from the Bolivarian Republic of Veneuela have come to our aid, sending a ship with much needed supplies and equipment. We are eternally grateful for the generosity of Comrade @NicolasMaduro, the government and people of Venezuela. pic.twitter.com/lD27Tu2Xmf

Humanitarian sea bridge
The Deputy Minister for the Caribbean from the Venezuelan Ministry for Foreign Affairs, Raúl Li Causi, who is in Saint Vincent and the Grenadines coordinating the cooperation of the Venezuelan Government in the emergency, told Misión Verdad that the most important aspect of the aid managed by Venezuela is the sea lift that has been established.

A Venezuelan Navy ship has been at the disposal of Saint Vincent and the Grenadines, to make trips to the islands and countries of the Eastern Caribbean to bring water and food to those affected by the volcanic eruption. “It will go to Santa Lucia, to seek tanks of water and non-perishable food,” explained said Li Causi. “Then it will sail to Dominica, eight hours away, to fill the water tanks and take on more non-perishable food.”

Despite the fact that Venezuela suffers from the consequences of the blockade by the United States, it has not stopped providing aid and solidarity to neighboring countries when they require it, at the same time demonstrating that humanitarian aid services should not be used as an excuse to invade or for “regime-change” operations.