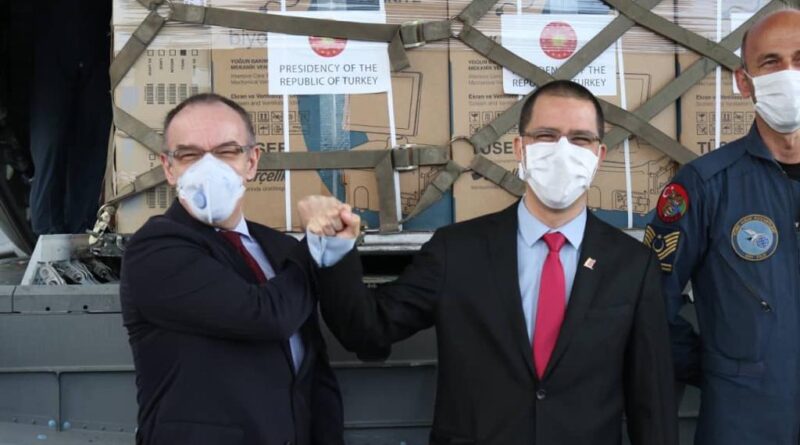 This Friday the executive vice president of the Republic, Delcy Rodríguez, announced the arrival of a flight with a cargo of 15 tons of humanitarian aid from Turkey to combat the Covid-19 virus in Venezuela.

Rodríguez recalled that Venezuela has also received the support of other sister nations such as Cuba, Russia and China.

In this regard, the chancellor of the Republic, Jorge Arreaza, responsible for receiving supplies, medicines and respirators to take care of the more serious patients, expressed thanks for this gesture, describing it as a sign of the capacity for solidarity of the Turkish government.

In this sense, the Minister of Popular Power for health, Carlos Alvarado, stressed that with this shipment from Turkey, Venezuela has received more than 100,000 tons of medicines, supplies and medical material that will be dedicated to the permanent medical care system for patients with this virus.

The strategic relationship that Presidents @NicolasMaduro and @RTErdogan have built in recent years, translates also into solidarity: yesterday we received almost 20 tons of supplies for the fight against #COVID_19 , sent by the Turkish government. Thank you Turkey 🇹🇷 ! https://t.co/ksLHuqF7R3

He explained that the government of Turkey included respirators, biosafety material, PCR tests, among other important and required supplies to combat the coronavirus that affects the Venezuelan population.

As of this Friday, July 17, Venezuela has carried out 1,420,066 tests, in the entire territory, which represents 57,336 tests per million inhabitants.

This shipment is part of the agreement for technical cooperation that Turkey and Venezuela signed last June, as well as relations of brotherhood and solidarity between both nations in the fight against Covid-19.

In this sense, on July 14, the President of the Republic, Nicolás Maduro, thanked his Turkish counterpart, Recep Tayyip Erdoğan, for all the support given to the Venezuelan people, in the midst of the pandemic. “Thank you very much to our dear sister Turkey and its president, thank you very much,” he said.

It is worth remembering that countries like Russia, China and Cuba have also sent aid to the Homeland as a sign of international solidarity, in the face of the coercive measures imposed by US imperialism against Venezuela, which hinders the acquisition of supplies required to fight the virus.