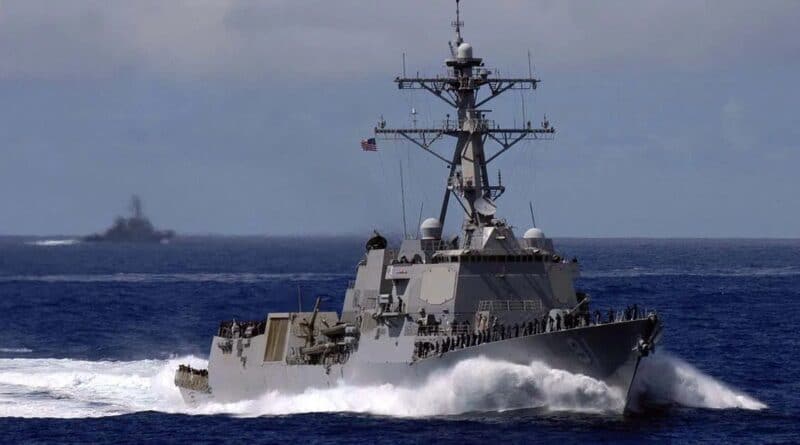 In a communique, the government of Venezuela denounced the “stealthy entry” of the US warship USS Pinckney DDG-91 to its contiguous zone and described this action as an “inexcusable act of provocation” that seeks to “undermine” “sovereignty and territorial integrity”.

Caracas has labeled the operation of the missile-destroying war ship, carried out 16.1 nautical miles from the coasts of the South American country, as a violation of Maritime Law and as “an act of provocation that was carried out as a result of Trump’s recent visit “to the Southern Command, in Florida,” in his desperate campaign to attract the Latino vote in that state in exchange for the permanent and illegal aggression against Venezuela.”

The text states that Venezuelan institutions and the Bolivarian National Armed Force (FANB) “have the sacred duty to defend the sovereignty and territorial integrity of Venezuela, at all costs, in accordance with international law.”

#COMMUNIQUE | Venezuela denounces to national and international community the stealthy entry into our Contiguous Zone of the US warship: USS PINCKNEY (DDG-91). Inexcusable act of provocation that seeks to undermine our sovereignty and territorial integrity https://t.co/LZQWSu3gva

Below the full official translation of the communique:

Venezuela denounces inexcusable act of provocation by the U.S. Southern Command in the Contiguous Zone
The Bolivarian Republic of Venezuela addresses the national and international community on the occasion of denouncing the infamous statements issued by the United States Southern Command, through its official social media accounts, in which it points out that Venezuela is exercising “excessive control” over its jurisdictional waters, while the war vessel USS PINCKNEY (DDG-91) was sailing in our Contiguous Zone at a distance of sixteen point one (16.1) nautical miles from the Venezuelan coast.

The illegal entry of the U.S. vessel into Venezuelan jurisdictional waters is a clear violation of International Maritime Law and can only be described as an inexcusable act of provocation, erratic and childish, which is being carried out as a result of the recent visit of Donald Trump to the aforementioned military command in Florida, in his desperate campaign to attract the Latino vote in that state in exchange by the permanent and illegal aggression against Venezuela.

The institutions of the Bolivarian Republic of Venezuela, particularly its Bolivarian National Armed Forces, will ensure respect for the sacred sovereignty and territorial integrity of Venezuela at all costs according to international law, contemplating all actions deemed necessary, without falling into absurd provocations intended to affect the peace and tranquility of Venezuelans, as well as the Latin American and Caribbean peoples.

The US Navy announced last Wednesday that it is carrying out the “freedom of navigation” operation in the Caribbean Sea, and stated that there was an “excessive demand” from Venezuela on June 23 when the US completed a similar operation.

The move was led by the Arleigh Burke-class guided-missile destroyer ‘USS Pinckney’ (DDG 91), which is described by RT as “one of the largest and most powerful ever built warship in the US.”

Other forays
In late June, the US Southern Command reported that the US Navy guided missile destroyer USS Nitze had sailed through international waters of the Caribbean Sea near Venezuela, “where the illegitimate Maduro regime falsely claims to have control.”

On that occasion, the Venezuelan Defense Minister, Vladimir Padrino López, branded this action as an “act of provocation” and advised the Commander of the Southern Command, Craig Faller, not to dare to send his forces to navigate Venezuelan waters. Nor to “carry out actions, military operations at sea,” because he would receive a “dignified response” from Venezuela.

Since April, US naval forces have been facing off the coast of Venezuela as part of an “anti-drug operation” in Caribbean waters, disguising a naval blockade and the military harassment of Venezuela.